Yankees star pitcher Domingo Germán was placed on administrative leave under Major League Baseball's domestic violence policy on Thursday, casting doubt over whether New York's top winner this season will be available for the playoffs.

Manager Aaron Boone was informed of the decision while he was driving to Yankee Stadium for a game against the Los Angeles Angels. New York was in position to clinch its first AL East title since 2012 with a victory.

"Set baseball aside, this is a bigger issue, obviously," Boone said. "When you hear the words domestic violence, it's one of those things that stops you in your tracks." 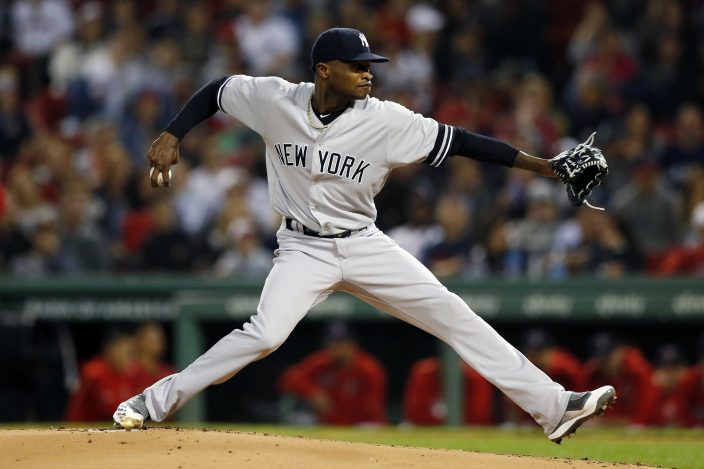 Details on what prompted the action weren't disclosed. MLB said the leave "may last up to seven days, barring an extension."

The Yankees are likely to begin the AL playoffs on Oct. 4 at home.

A 27-year-old right-hander from the Dominican Republic who made his major league debut in 2017, Germán entered this season with a 2-7 record in 14 starts and 14 relief appearances. He became a full-time member of the rotation after ace Luis Severino got hurt in spring training and is 18-4 with a 4.03 ERA in 24 starts and three relief appearances over 143 innings

Germán was shifted to the bullpen last week as the Yankees limited his innings — he threw 94 in the majors and minors combined last year. He followed CC Sabathia in Wednesday night's 3-2 loss to the Angels and tossed 2 1/3 scoreless innings. Boone said he "heard some of the whispers" that MLB was investigating.

MLB and the union agreed to the domestic violence policy in August 2015. Players get paid while on administrative leave, but if discipline is later imposed the time missed can be converted to an unpaid suspension.

"I give Major League Baseball and the players' association credit for doing their part several years ago trying to be ahead of this in putting disciplinary action in place to hopefully being a part of the solution to what is a problem in our society, obviously," Boone said.

Germán is not allowed to be around the team during the administrative leave.

"There's no denying the importance of Domingo to our team." Boone said. "So there is that element of we must continue on and continue to press forward. But it's also, this is something that touches our society, unfortunately. So, hopefully, that's a forum for people, players to talk through it."

In Germán's absence, the Yankees will formulate their postseason rotation from among Severino, James Paxton, Masahiro Tanaka, Sabathia and J.A. Happ. Severino returned from a lat injury and made his season debut with four scoreless innings Tuesday.

"We have to certainly make plans like he may not a part of it," Boone said. "It does turn into like losing a player to injury. "

Acquired by the Yankees from Cincinnati while he was under investigation, New York closer Aroldis Chapman was suspended for the first 29 games of the 2016 season under the domestic violence policy.

In the NFL, New England receiver Antonio Brown is being investigated for accusations of rape and sexual assault, allegations the player's lawyer has denied.

Milan turns to Jay-Z's Roc Nation, Liverpool to re ...

Preparing to complete a ninth Seri ...

Burkina Faso's volunteer fighters are no match for ...

Armed only with a knife, Issa Tamb ...