A General Motors offer to invest $7 billion in U.S. facilities includes $2 billion from joint ventures and suppliers for new plants that would pay workers less than the top union wage, a person briefed on the matter said.

The offer is a major issue that could get in the way of a deal between the United Auto Workers and the company to end a nationwide strike, now in its fourth day. About 49,000 UAW workers have been on picket lines since Monday in a contract dispute about wages, health care costs, profit sharing, job security and other issues.

The $2 billion investment from entities other than GM is important because those factories would not be run as typical GM plants. Although workers at those facilities would be represented by the UAW, they would be paid far less than the full UAW wage of about $30 per hour, said the person, who requested anonymity because details of contract talks are confidential. The union wants to add jobs that pay the top UAW wage. General Motors employees chant in unison "No contract! No work!" as they circle at one of the Flint Assembly Plant entrance, blocking through traffic during the fourth day of the national UAW strike against GM on Thursday, Sept. 19, 2019 in Flint. The United Auto Workers union and its roughly 49,000 members at GM plants in the U.S. have been on strike since Monday, Sept. 16 because contract negotiations with the automaker had broken down. It's the first national UAW strike since 2007, when GM workers were out for two days. (Jake MayThe Flint Journal via AP)

On Sunday, GM made part of the offer public, saying that its investment included 5,400 jobs, the majority of them new hires. But the person briefed on the talks said only about 2,700 new jobs will be added. The rest are jobs that would be retained because of the investments.

The person said union negotiators were disappointed after the company briefed them on details Wednesday. Further details were not available.

GM spokesman Dan Flores wouldn't comment on the offer. GM said on Sunday that it would invest in eight facilities in four states, introduce new electric trucks, make wage or lump sum payment increases and give each worker an $8,000 bonus once the deal is ratified. 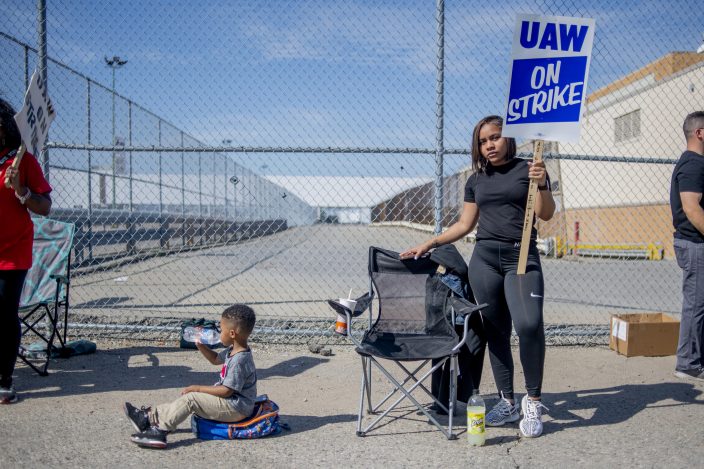 Rylan Hurt, 2 of Flint, drinks bottled water while sitting on his backpack, trying to stay cool as Flint resident Delani Richardson, who has worked as a temp on the trim line for six months, stands tall on the picket line outside of the Flint Assembly Plant during the fourth day of the national UAW strike against General Motors on Thursday, Sept. 19, 2019 in Flint, Mich. (Jake MayThe Flint Journal via AP)

Releasing the offer just before the strike started at midnight Monday was designed to turn up the heat on union bargainers, who until then had said the company's response to union proposals had been slow. UAW Vice President Terry Dittes, the top negotiator with GM, told the company that if the offer had been made earlier, the strike could have been averted.

The $2 billion investment from joint ventures and suppliers also includes a proposal to create an electric vehicle battery assembly plant in Lordstown, Ohio, where the company is in the process of closing a small-car assembly plant, the person said. In addition, GM will pay for an electric pickup truck that would go into the Detroit-Hamtramck plant, which the company also wants to close.

The Lordstown facility would offer lower wages, the person said.

Just how much workers are paid at the Lordstown facility is an issue because electric vehicles are expected to supplant those powered by gasoline in the future. CEO Mary Barra has predicted an "all-electric future" for GM, meaning jobs making gas-powered cars could be in jeopardy.

On Thursday, Dittes reported many unresolved issues in the talks but said progress was being made. He made the comments in a letter to union members.

Three players who have tested posi ...