South Korea says tests on dead pigs from two farms near its border with North Korea came back negative for African swine fever, at least temporarily easing fears over the spread of the illness that has ravaged pig herds across Asia.

South Korea's agriculture ministry said Saturday it will continue to maintain an elevated level of quarantine and preventive measures at farms near the border following an outbreak that was confirmed earlier this week.

Workers have so far culled more than 10,000 pigs to contain the disease after the country's first two cases were confirmed in the towns of Paju and Yeoncheon, which are near the border. 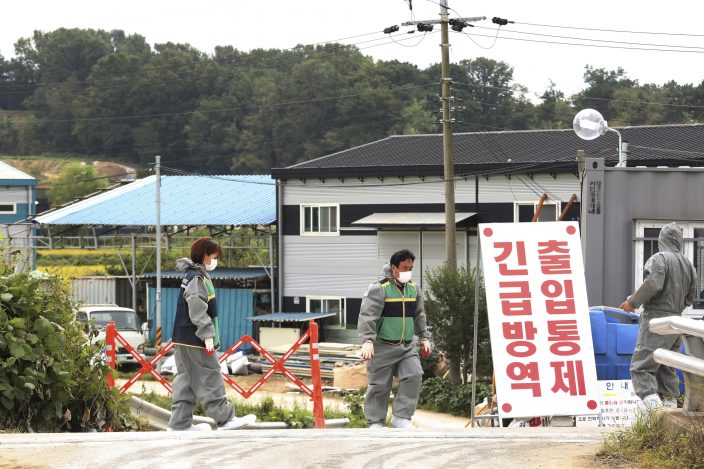 Quarantine officials stand guard as a precaution against African swine fever near a pig farm in Paju, South Korea, Friday, Sept. 20, 2019. South Korea said Friday that it is investigating two more suspected cases of African swine fever from farms near its border with North Korea, as fears grow over the spread of the illness that has decimated pig herds across Asia. The notice reads: "Under quarantine." (AP PhotoAhn Young-joon)

The North reported an outbreak near its border with China in May.

African swine fever is harmless to people but fatal for pigs.