The promoter of an event set up for Earthlings to party around the "Storm Area 51" internet craze in the remote Nevada desert has pulled the plug due to low attendance, while the host of a festival for several thousand people in the tiny town of Rachel said Saturday her show will go on.

"Area 51 Basecamp" organizer Keith Wright said that after drawing just 500 attendees at a Friday event planned for 5,000 at the Alien Research Center souvenir shop in Hiko, he had to pull the plug.

"We put on a safe event for the people that showed up," Wright said. "But we had to make the decision today because it costs tens of thousands of dollars to staff each day." 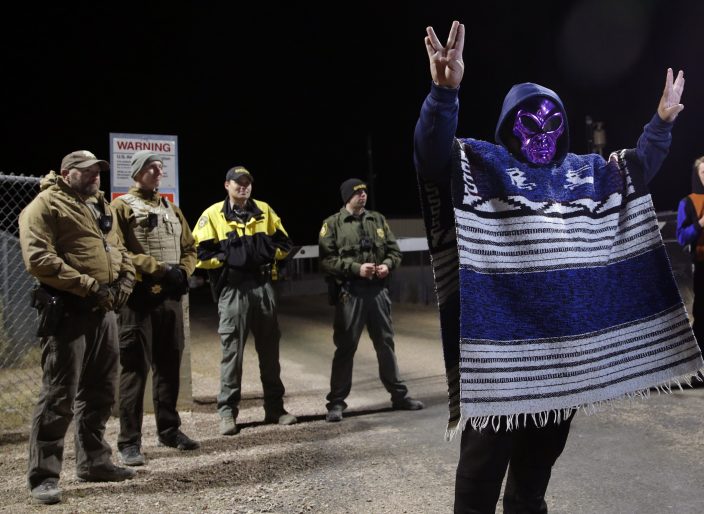 A man in an alien mask stands at an entrance to the Nevada Test and Training Range near Area 51 Friday, Sept. 20, 2019, outside of Rachel, Nev. People gathered at the gate inspired by the "Storm Area 51" internet hoax. (AP PhotoJohn Locher)

"It was a gamble financially," he said. "We lost."

Several dozen campers still at the site can stay until Sunday, he added. 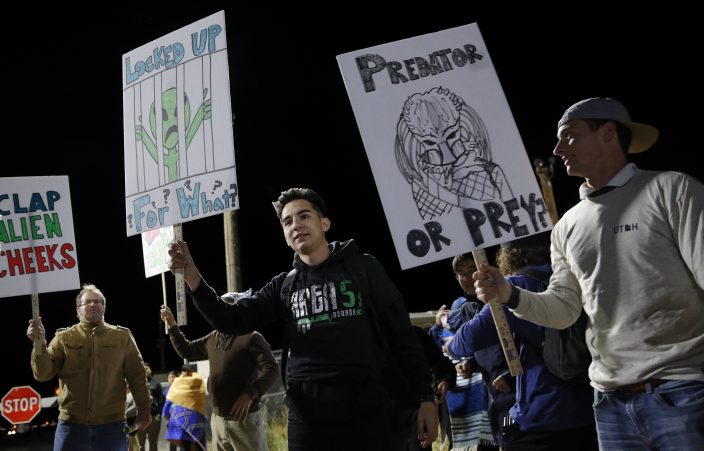 People holds signs at an entrance to the Nevada Test and Training Range near Area 51 Friday, Sept. 20, 2019, near Rachel, Nev. People gathered at the gate inspired by the "Storm Area 51" internet hoax. (AP PhotoJohn Locher)

West, in a voice hoarse from stress and lack of sleep, said a noon-to-midnight slate of "Alienstock" event musical entertainment will continue for the several thousand revelers camping on her property and nearby federal land.

"This is the most fabulous time," West said. "I'm just so grateful that people came. This is their event as much as it is mine."

In Nye County, Sheriff Sharon Wehrly reported no one showed up at a main entrance and an auxiliary gate at the once-secret Area 51 U.S. Air Force facility.

Wehrly revised to 100 each the number of people who appeared at each of those gates early Friday near Amargosa Valley, a 90-minute drive west of Las Vegas.

Lee, about a two-hour drive north of Las Vegas, said revelers gathered until about 4 a.m. at two gates between Hiko and Rachel, and said about 20 people broke from among revelers and "acted like they were going to storm but stopped short."

Lee and Wright reported one arrest, for disorderly conduct, at the "Area 51 Basecamp" event Hiko.

Earlier, officials reported five arrests, including one man treated for dehydration by festival medics in Rachel.

One could say the vibe among the assembled, which Lee estimates totaled in the low thousands, has remained mostly harmless.

While costumed space aliens were a common and sometimes hilarious sight in events that began Thursday, no one has reported seeing actual extraterrestrials or UFOs.

The wife of a French bus driver sa ...