Very behind the scenes, a whistleblower from the intelligence community voiced urgent concern about a matter involving a conversation between Ukraine's leader and President Donald Trump. It's so hush-hush that even Democrats won't say all that they know, or suspect.

Very much out in the open, Trump is calling for an investigation that involves Ukraine and could help him win re-election if it breaks his way.

Trump's interest in getting dirt from abroad on prospective Democratic presidential rival Joe Biden has been hiding in plain sight for months. His fealty to standards that other presidents have either lived by or pretended to — as when it comes to chats with foreign leaders, for example — is thin. 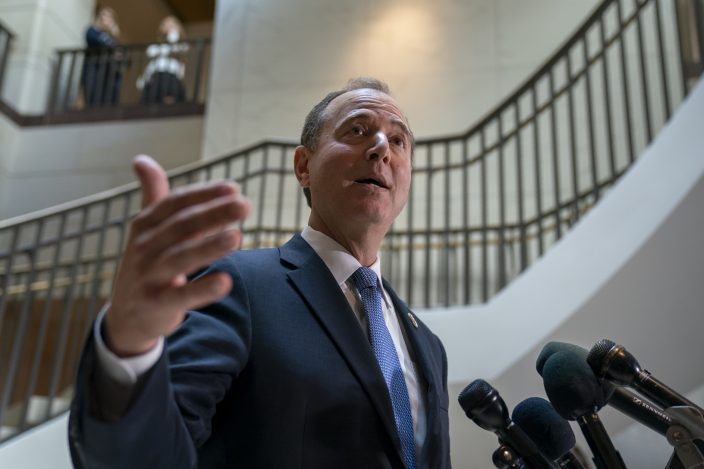 Rep. Adam Schiff, D-Calif., chairman of the House Intelligence Committee, speaks with reporters about a whistleblower complaint Thursday, Sept. 19, 2019, on Capitol Hill in Washington. Schiff says he cannot confirm a press report that said a whistleblower’s complaint concerned a promise President Donald Trump made on a phone call to a foreign leader. (AP PhotoJ. Scott Applewhite)

This is, after all, the man who openly encouraged Russia to snoop on Hillary Clinton's email and much more recently said that, sure, he'd listen to foreigners who come to him with dirt on an opponent. Why not? he wondered.

As the contours of the episode roiling the capital begin to flesh out, here are some questions and answers at the intersection of Trump, Ukraine and the whistleblower.

Because someone in the government, who is under the umbrella of U.S. intelligence, saw or heard something that raised a credible and "urgent concern" about how someone else in government did or said something that "involves confidential and potentially privileged communications by persons outside the intelligence community." That's according to Michael Atkinson, the inspector general for intelligence.

It's no more spelled out than that so far, because the complaint remains a closely held secret.

But the complaint was based on a series of events, one of which was a July 25 call between Trump and Ukrainian President Volodymyr Zelenskiy, according to two people familiar with the matter. The people were not authorized to discuss the issue by name and were granted anonymity."

WHAT DOES TRUMP SAY ABOUT THE COMPLAINT?

"I have conversations with many leaders. It's always appropriate."

As for the July 25 phone conversation he had with Zelenskiy: "It doesn't matter what I discussed."

WHAT DO DEMOCRATS SAY?

House Speaker Nancy Pelosi says if reports about the complaint bear out, Trump faces "serious repercussions" and the nation will have "grave, urgent concerns for our national security."

As the leader at the center of a months-long Democratic debate over whether to impeach Trump — she has resisted pressure from members to do so — Pelosi will find her every word on this matter scrutinized for signs of whether this makes her want to move ahead.

WHERE DO UKRAINE AND BIDEN COME INTO IT?

Biden was vice president, with some influence over U.S. policy on Ukraine, when son Hunter was on the board of an energy company owned by a Ukrainian businessman. Trump for months has been calling for more scrutiny of that period and impugning corrupt motives to the business and government work of the Biden family, without putting forward evidence of wrongdoing.

"Someone ought to look into Joe Biden," he said again Friday, undeterred by the revelation of the whistleblower complaint.

The question arising from this matter is whether Trump personally pressed Zelenskiy to investigate the Bidens in that phone call or other times and, if so, whether seeking or accepting such help from a foreign leader to benefit his re-election constitutes a misuse of presidential power. That question can't be answered with what's known so far.

IS THIS RUSSIA REDUX, JUST A DIFFERENT COUNTRY?

There are some similarities with the episode investigated by special counsel Robert Mueller as he tracked an aggressive effort by Russia to tilt the 2016 U.S. election to Trump. There are also differences, as well as much that remains unknown.

It could also be argued that it is not. The Trump administration has had longstanding complaints about corruption in Ukraine and asking for corruption to be investigated is, on the surface, different than the potential collusion between Moscow and the Trump campaign that Mueller looked into.

One striking twist here is that pressure for a Ukrainian investigation of the Bidens has come most publicly not from the government or the campaign, but from Trump's personal lawyer, Rudy Giuliani.

Giuliani has been working for months to get Ukraine's leadership to probe the Bidens.

In May, Giuliani scrapped plans to take his case for a Biden investigation directly to authorities in Kiev, when word got out about the trip. But he's been talking to Ukrainians about it.

At the time, he tweeted: "Explain to me why Biden shouldn't be investigated if his son got millions from a Russian loving crooked Ukrainian oligarch while He was VP and point man for Ukraine."

Asked Thursday on CNN whether he'd pressed Ukrainian leaders to probe the Bidens, Giuliani said: "Of course I did" seconds after saying "No, actually I didn't."

Only bits and pieces of information about it have emerged because the administration has balked at showing it to Congress, much less to the public.

The timeline is this: Atkinson, the inspector general, received the complaint Aug. 12, reviewed it and found it credible and urgent, and forwarded it two weeks later to Joseph Maguire, acting director of national intelligence. Maguire's office decided the complaint was outside the agency's jurisdiction and not urgent, and informed Congress Sept. 9 of the situation without showing it the complaint. Atkinson said that was a break from normal procedure, which is to disclose the contents to lawmakers.

That's when House Democrats began to suspect that Trump was the subject of the complaint and quickly followed with a subpoena, yet to be satisfied.

The number of canceled or postpone ...