President Donald Trump's vision of America's tomorrows looks much like its yesterdays.

He loves "beautiful" coal. "Beautiful" warships. And "those four beautiful words: MADE IN THE USA!" He speaks of the country's might as measured by its steel mills, farms and cars rolling off Detroit assembly lines.

He's not merely summoning happy memories. His nostalgia shapes policy and lives, too. 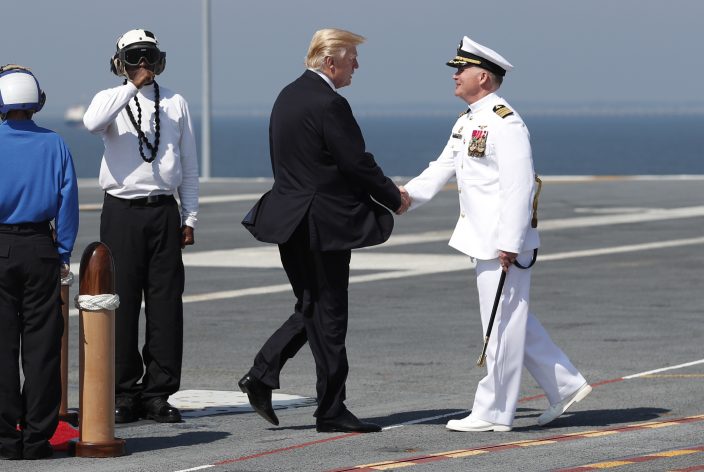 FILE - In this July 22, 2017, file photo, President Donald Trump shakes hands with Ship Captain Rick McCormack as he arrives for the the commissioning ceremony of the aircraft carrier USS Gerald R. Ford (CVN 78) at Naval Station Norfolk, Va. Trump’s vision of America’s tomorrows looks much like its yesterdays. He loves “beautiful” coal. “Beautiful” warships. And “those four beautiful words: MADE IN THE USA!” He speaks of the country’s might as measured by its steel mills, farms and cars rolling off Detroit assembly lines. (AP PhotoCarolyn Kaster, File)

Trump glorifies the muscle and sweat (but not the labor unions) of those who toil in factories and till the soil, like those idealized depictions of labor in century-old murals .

He does not love wind power. He's a fossil fuel guy. A meat and potatoes man, too, he steers an administration that reflects not just his agenda but his pre-woke diet, as when it pulled back on requirements for whole grains in school lunches.

He's had it out for those newfangled light bulbs for years, ever since he warned flatly and falsely that they "can cause cancer."

He waves off modern worries about global warming by pointing to a cold snap. His campaign sells plastic straws to thumb its nose at what Trump considers political correctness.

Meantime the world moves on.

Industry, technology and much of the culture are finding new ways of doing and living.

Even the auto industry, which doesn't like being told by government what to do, has found itself unhappy about how Trump is easing fuel economy requirements . Crusty old Detroit has already moved on from its most gas-guzzling days and invested massively in more efficient vehicles, kicking higher even as Trump lowers the goal posts.

U.S. prosperity has been driven for decades by services, technology and new things, not the grunt work of old that is celebrated by Trump. He sees trade in terms of the exchange of goods and he ignores services, where long-standing U.S. strength in global competitiveness does not fit his world view of an America under siege by rapacious traders like China.

"All those things come from the '50s and '60s," said Irving Rein, a professor of communications at Northwestern University who has studied cultural trends for more than a half century. He says that when Trump cheers things such as king coal, big steel and trade protectionism with the "big, beautiful tariff" on China, he knows his audience — a largely older one that takes comfort in a filtered view of the past.

"Popular culture is like a river; it just kind of floats by," Rein said. "Some of it stays." And Trump has captured those eddies.

In his own way, Joe Biden has, too.

While disagreeing with the 73-year-old Trump on almost all of the above, the 76-year-old Democratic presidential hopeful invokes a time of comity between political opponents — "the feeling that, nostalgically, there was more compromise," Rein said — and holds out the prospect of bringing back those days. This, while Trump and most of Biden's rivals seem ready to lunge at each other.

Trump's throwback tendencies are not unique in leadership. Ronald Reagan could be steeped in sentimentality, too, if without the sharp edges of this president.

Constantine Sedikides, a psychology professor who studies nostalgia from Britain's University of Southampton, said right-wing populists in Europe have romanticized the past to advance goals such as Britain's exit from the European Union and the marginalization of "outgroups" such as Islamic migrants and refugees.

"Trump is using collective nostalgia — sentimental longing about the country's rosy past — to his political advantage," Sedikides said by email.

By its nature, such cultural observers say, collective nostalgia is history seen through a veil, with old hardships and prejudices put out of mind in favor of wistful remembrance. "You cherry-pick things," Rein said.

Some of Trump's retro impulses are reflected by now in law or in the lifting of regulations, a trend most pronounced when it fits his pro-industry conservatism as well.

This past week his administration barred California's longtime authority to set stricter car and truck emission standards than federal rules require. Nearly half the states sued to block the Trump administration's action, which by its own reckoning is likely to result in additional fuel consumption of 500,000 barrels a day.

The auto industry, instead of being relieved, warned that their vehicles will become less competitive globally if the incentive to increase fuel efficiency is lost. Trump called them "politically correct Automobile Companies."

Trump has eased up a variety of environmental regulations, in part to serve his interest in reviving coal. But that effort is up against forces of the modern free market, awash in natural gas, as utilities continue closing coal-fired plants in favor of energy sources that are cleaner, cheaper or both.

This month the administration slowed a long push by Congress to wean the country from old-time incandescent bulbs in favor of LEDs and other lights that use less energy. Trump argues the savings aren't worth it, consumers should have a choice and under those new bulbs "I always look orange."

"And so do you," he told a Republican gathering, as if realizing he has been associated with that color anyway.

The Tennessee Titans have signed t ...