President Donald Trump says he spoke to Ukraine's new president about his summer election and the fact that "we don't want our people, like Vice President Biden and his son" contributing to corruption already happening in Ukraine.

Trump appeared Sunday to stop short of acknowledging that he discussed Democratic presidential candidate Joe Biden and Biden's son, Hunter, with Ukrainian President Volodymyr Zelenskiy, during a July 25 telephone conversation that's the basis of a whistleblower complaint against Trump.

A person familiar with the matter has told The Associated Press that Trump urged Zelenskiy to investigate Hunter Biden, who worked for a Ukrainian gas company. The person wasn't authorized to discuss the issue publicly and spoke on condition of anonymity. 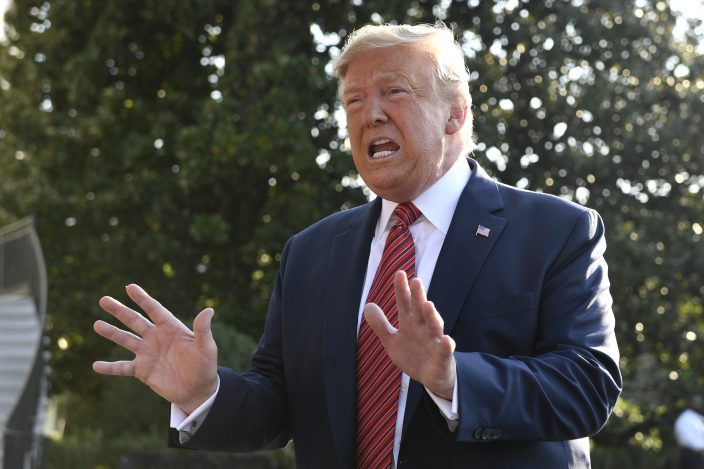 President Donald Trump talks with reporters on the South Lawn of the White House in Washington, Sunday, Sept. 22, 2019, as he prepares to board Marine One for the short trip to Andrews Air Force Base. Trump is traveling to Texas and Ohio before heading to New York for the upcoming United Nations General assembly. (AP PhotoSusan Walsh)

The White House didn't immediately respond to a request to clarify Trump's remarks.

Trump answered several questions about the conversation with Zelenskiy as the president left the White House for Texas.

Virus cases jump in worst-hit trio of US, Brazil and In ...