New Zealand-based, Nigerian-born Adesanya landed a booming right hook which floored Whittaker in the final seconds of the first round and then ended the fight in the second of the five-round contest with a left hook.

Adesanya was interim champion before claiming the title against Whittaker on Sunday and improved his UFC record to 7-0. 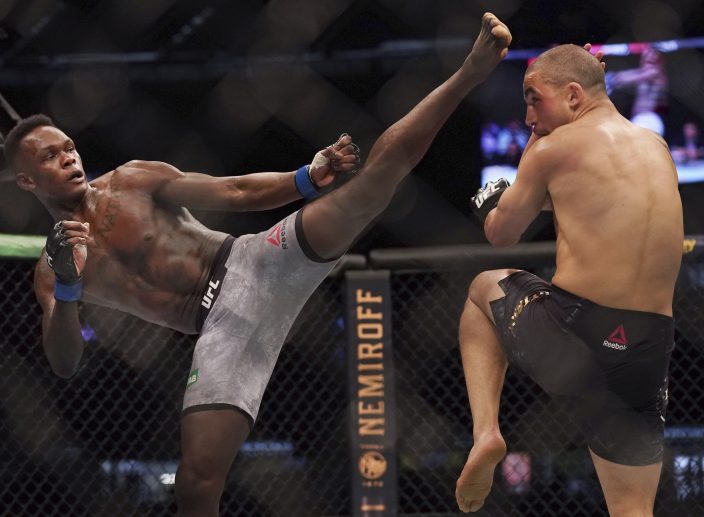 Robert Whittaker of Australia, right, is kicked by Israel Adesanya of New Zealand as they compete during UFC 243 in Melbourne, Sunday, Oct. 6, 2019. Interim champion Adesanya dethroned UFC middleweight champion Whittaker with a knockout in the second round of their 185-pound unification bout. (Michael DodgeAAP Image via AP)

After doing a cartwheel during his entry to the stadium, Adesanya said he was determined to put on a show.

"I'm a dancer. I'm an entertainer, I have to give them a show and set the tone," Adesanya said. "There's no one like me. No one.

"I can do things that no one else has done, from the walk out to the fight itself. It's about legacy. It's about being an icon."

The 30-year-old said he had soaked up everything Whittaker could throw at him in the short bout.

"He caught me with a nice one, but I returned," Adesanya said.

"I eat it, but give it back two times. I'm tough and smart."

"I was in the nose bleeds, and now I've made his nose bleed," Adesanya said immediately after the fight in reference to that 2015 event where he was a spectator in the upper reaches in the stadium while Whittaker was a rising UFC star on the card at that event. The New Zealand-born Australian Whittaker won his fight that night.

It was 28-year-old Whittaker's first fight since June 2018 in Chicago. He was scheduled to fight in February but withdrew due to emergency bowel surgery.

Whittaker's UFC world-title defense was the first by an Australian.

"He's a great striker and congratulations," Whittaker said. "I took the fight to him. It was tit for tat and I got caught. It happens.

"I'm 28. This is my first loss in the division. Trust me when I say I'm not going anywhere."

Adesanya has quickly moved on from Whittaker and is already taunting potential next opponent, Brazil's Paulo Costa.

"Borrachinha, this is my Octagon, Adesanya said. "I'm going to smash him. I want to rearrange his face.

"He looks beefy. He looks like a swimsuit model."

Japan recorded a trade deficit for ...

Blake Wheeler had two goals and an ...