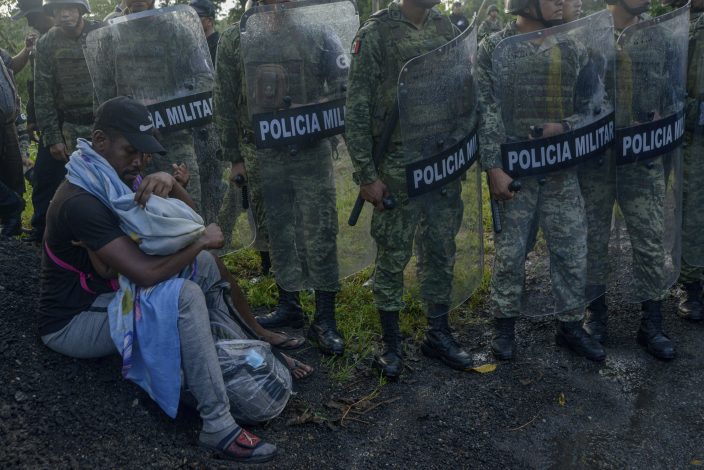 A migrant tends to a child while surrounded by members of the National Guard near Tuzantan, Chiapas state, Mexico, Saturday, Oct. 12, 2019. Hundreds of migrants were arrested by Mexican authorities as they made their way to Mexico City. (AP PhotoIsabel Mateos)

TRUMP-IMPEACHMENT-GIULIANI _ President Donald Trump stands behind personal attorney Rudy Giuliani, one of his highest-profile and most vocal defenders, amid reports that federal prosecutors in the city Giuliani led as mayor are eyeing him for possible lobbying violations. By Darlene Superville, Jonathan Lemire and Zeke Miller. SENT: 1,170 words, photo. WITH: TRUMP-IMPEACHMENT-WHAT'S NEXT _ As Congress ends break, House steps up impeachment inquiry (sent).

ASIA-TYPHOON _ Helicopters, boats and thousands of troops are deployed across Japan to rescue people stranded in flooded homes as the death toll from a ferocious typhoon climbed to at least 19 with more than a dozen missing. One woman fell to her death from a rescue helicopter. By Yuri Kageyama. SENT: 780 words, photos. With ASIA-TYPHOON-THE LATEST. 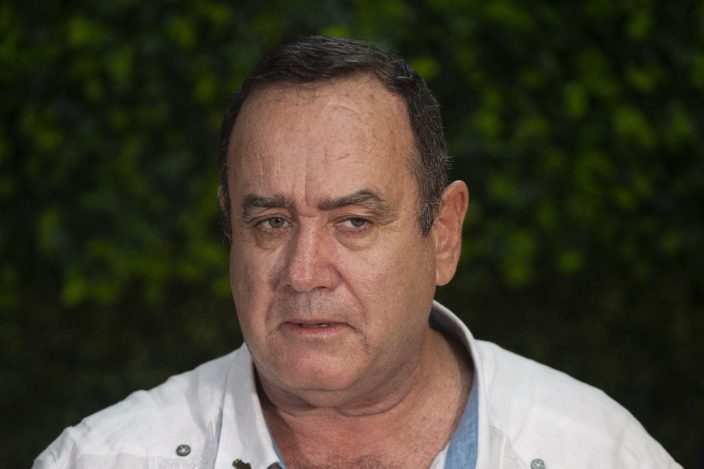 ELECTION 2019-LOUISIANA-GOVERNOR _ Louisiana Gov. John Bel Edwards' quest for a second term as the Deep South's only Democratic governor will stretch over another month, as voters denied him an outright primary win Saturday and sent him to a runoff election. By Melinda Deslatte. SENT: 890 words, photos. With ELECTION-2019-LOUISIANA-GOVERNOR-THE LATEST. 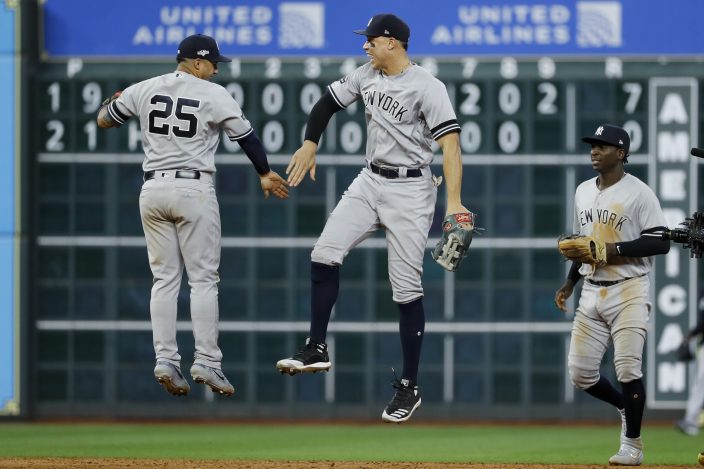 BRITAIN-US DIPLOMAT’S WIFE _ British media reports that the wife of an American official who left the U.K. after being involved in a fatal road accident no longer has diplomatic immunity. SENT: 140 words, photos.

NEW HAMPSHIRE CHURCH SHOOTING _ A gunman open fire at a wedding ceremony inside a New Hampshire church, shooting two people including the presiding bishop before guests tackled the shooter and pinned him to the ground until police arrived, authorities say. SENT: 380 words, photo.

UNITED STATES-SYRIA _ President Donald Trump says he is an "island of one" for removing U.S. forces from northeastern Syria. But he remained steadfast and defended a move that drew widespread bipartisan criticism that he has endangered stability in the Middle East and risked the lives of Syrian Kurdish allies who helped the U.S. bring down the Islamic State group in Syria. SENT: 250 words, photo.

ECUADOR _ Ecuador's army took to the streets after President Lenín Moreno ordered the first 24-hour curfew in decades in response to a day of attacks on government buildings and media offices. SENT: 950 words, photos. With ECUADOR-THE LATEST.

HONG KONG-PROTESTS _ Tearing a page out of ancient Chinese military philosophy, protesters in Hong Kong changed tactics and popped up in small groups in multiple locations across the city rather than gather in one large demonstration, pursued by police who swooped in to make muscular arrests. SENT: 520 words, photos.

TUNISIA-PRESIDENTIAL ELECTION _ Tunisians are voting for president in an unusual contest pitting a populist tycoon who just got out of jail against a law professor backed by resurgent Islamists. SENT: 590 words, photos.

POLAND-ELECTION _ Poles were voting Sunday in a parliamentary election that the ruling nationalist Law and Justice party was favored to win, buoyed by the popularity of its conservative agenda and its generous social spending. SENT: 510 words, photos.

MOZAMBIQUE-ELECTIONS _ Mozambique's elections on Tuesday are almost certain to be won by the ruling party, Frelimo, and President Filipe Nyusi — but it is unclear if the results will establish badly-needed stability and economic growth. SENT: 1,100 words.

CALIFORNIA WILDFIRES _ Three people have died at the scene of Southern California wildfires this week, authorities say, as firefighters aided by diminishing winds beat back a blaze on the edge of Los Angeles that damaged or destroyed more than 30 structures and sent a blanket of smoke across a swath of neighborhoods. SENT: 910 words, photos, video. With: CALIFORNIA POWER SHUTOFF-AIR QUALITY _ California power shutdowns raise air pollution worries; CALIFORNIA POWER SHUTOFF ENDS _ Utility: All power has been restored to Northern California (both sent).

CALIFORNIA-NEW LAWS _ California will be the first state to ban the sale and manufacture of new fur products and the third to bar most animals from circus performances under a pair of bills signed by Gov. Gavin Newsom. The fur law bars residents from selling or making clothing, shoes or handbags with fur starting in 2023. SENT: 850 words, photos.l

JESSYE NORMAN-FUNERAL _ World-famous performers, civil rights leaders and people who know her good works are gathering for the funeral of international opera star Jessye Norman in her Georgia hometown. Norman will be laid to rest at the William B. Bell Auditorium in Augusta, Georgia, with a private burial to follow. By Music Writer Mesfin Fekadu. SENT: 920 words, photos.

BBN--NLCS _ Max Scherzer followed Aníbal Sánchez's near no-hitter with a try of his own and the stingy Washington Nationals beat the St. Louis Cardinals 3-1 to take a 2-0 lead in the NL Championship Series. By Sports Writer Jay Cohen. SENT: 960 words, photos.

FBC--T25-FLORIDA-LSU _ Joe Burrow passed for 293 yards and three touchdowns, and fifth-ranked LSU scored three straight touchdowns after falling behind early in the second half to emerge with a 42-28 victory over No. 7 Florida. By Sports Writer Brett Martel. SENT: 700 words, photos.

Bloom: Red Sox won't rush to have manager by sprin ...

The Latest: Barty 1st player into 4th round at Aussie O ...