From Syria, where the U.S. pulled back in the face of a Turkish offensive, to Ukraine, where the newly elected president saw his image dented by a U.S. impeachment inquiry, new fault lines and tensions offer the Kremlin fresh opportunities to expand its clout and advance its interests.

In Syria, the U.S. military withdrawal leaves Russia as the ultimate power broker, allowing it to help negotiate a potential agreement between Syrian President Bashar Assad and the Kurds who were abandoned by Washington.

And in Ukraine, where Volodymyr Zelenskiy, a comedian turned president, has found himself drawn into the U.S. political battles, Russia may use the volatility to push for a deal that would secure its leverage over its western neighbor. 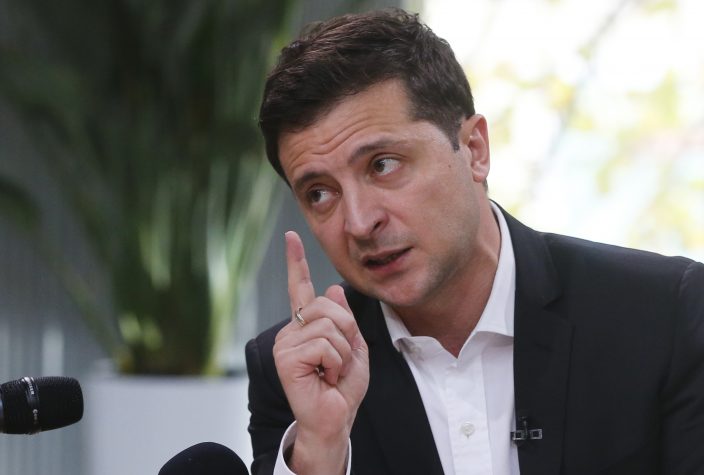 Washington's abrupt decision to ditch the Kurds contrasted sharply with Moscow's unwavering support for its ally Assad, which helped his government reclaim the bulk of the country's territory in a devastating civil war.

Along with military power, Russian President Vladimir Putin has relied on diplomacy to achieve his goals in Syria, reaching out to regional powers — from Iran to Saudi Arabia, Israel and Turkey. 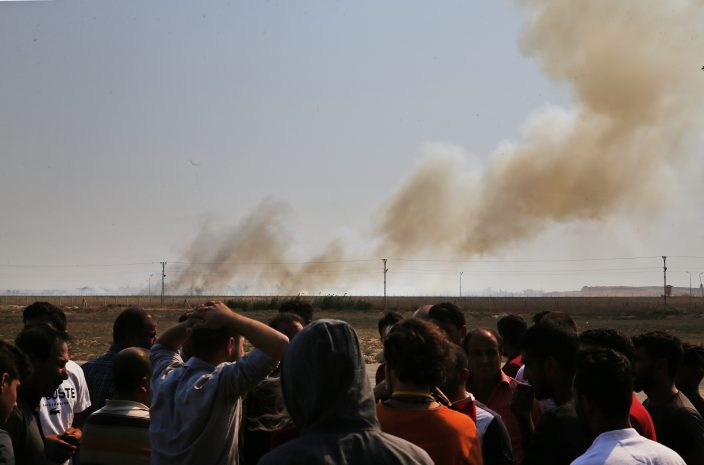 People watch from Akcakale, Sanliurfa province, southeastern Turkey, as smoke billows from fires on targets in Tel Abyad, Syria, caused by bombardment by Turkish forces, Sunday, Oct. 13, 2019. The United Nations says at least 130,000 people have been displaced by the fighting in northeastern Syria with many more likely on the move as a Turkish offensive in the area enters its fifth day.(AP PhotoLefteris Pitarakis)

NATO member Turkey has become a particularly important partner for Russia. Even though the two countries have backed opposite sides in the Syrian conflict, they have pooled efforts to negotiate a de-escalation zone in the Syrian province of Idlib and co-sponsor talks on forming a committee that would draft a new Syrian constitution.

Turkey's offensive in Syria, which has drawn harsh criticism from the U.S. and European Union, may now push Moscow and Ankara even closer.

"Russia wants to benefit from that operation, and one of the gains could be the strengthening of ties with Turkey," said Kirill Semenov of the Russian International Affairs Council. "The harsh response from Washington, the EU reaction, the threat of sanctions against Turkey all play into Moscow's hands by making Moscow and Ankara even closer."

Turkish President Recep Tayyip Erdogan called Putin just before unleashing air strikes and an artillery barrage on Kurdish-controlled areas in Syria. Ankara charges that the Kurdish fighters in Syria are allied with the outlawed Kurdistan Workers' Party, or PKK, which has led an insurgency against Turkey for 35 years.

While Russia has noted the need to respect Syria's territorial integrity, it also has emphasized Turkey's right to ensure its security — a benevolent stance contrasting with the harsh Western criticism of the Turkish offensive.

Russia has long urged the U.S.-allied Kurdish fighters in Syria to come back to Damascus' fold, an offer they may need to take more seriously now.

"We heard that both Syrian officials and representatives of Kurdish organizations expressed interest in Russia using its good relations with all parties to the process in arranging such talks," Russian Foreign Minister Sergey Lavrov told reporters on Thursday. "We will see what we can do."

Lavrov also pointed at another Moscow goal — brokering a dialogue between Turkey and Assad's government, something Ankara has strongly rejected in the past.

"It would be good for Russia to bring Ankara and Damascus to the table and have Ankara acknowledge the legitimacy of the regime in Damascus, if not Assad himself," Semenov said.

In another power game, Russia hopes to see major gains in its long-running effort to retain leverage over its neighbor Ukraine, a former Soviet republic looking to align itself with the West. In 2014, Russia annexed Ukraine's Crimean Peninsula and threw its support behind a separatist insurgency in eastern Ukraine following the ouster of Ukraine's Moscow-friendly leader, moves that triggered bruising Western sanctions.

Zelenskiy, who was elected by a landslide in April, has vowed to end the fighting, which has killed more than 13,000. Early this month, Ukraine, Russia and the rebels signed a tentative agreement to hold local elections in the east, a deal Zelenskiy insists conforms to a 2015 peace accord that was brokered by France and Germany.

The agreement, however, has been criticized by some in Ukraine as "capitulation" to Moscow. On Monday, far-right and nationalist groups are staging a major rally in Kyiv to protest Zelenskiy's peace plan.

The Ukrainian president's standing has been weakened by the political furor in the United States, where Democrats in Congress are conducting an impeachment inquiry triggered by his telephone conversation with Trump. In the July 25 call, Trump pushed him to open a corruption investigation into Democratic rival Joe Biden and his son. In the days before the call, Trump ordered a freeze on hundreds of millions of dollars in badly needed U.S. military aid.

Zelenskiy has denied being pressured by Trump, but this past week he encouraged U.S. and Ukrainian prosecutors to discuss investigating a gas company linked to Biden's son, although no one has produced evidence of criminal wrongdoing by either Biden.

The White House's publication of a rough transcript of the call was embarrassing for the 41-year-old Ukrainian president because it showed him eager to please Trump and dismissive of European partners whose support he needs to end the conflict in the east. While Zelenskiy sought to play it down, it could help Russia by eroding support for Ukraine in Germany and France.

"France and Germany have grown tired of Ukraine and are too busy with their own problems, and their only goal is to close the issue of the war in the east by any means," said Vadim Karasev, head of the Institute of Global Strategies, an independent Kyiv-based think tank. "If Russia offers a compromise, Berlin and Paris will heave a sigh of relief. By publicly kicking (German Chancellor Angela) Merkel and (French President Emmanuel) Macron, Zelenskiy untied their hands and there is no more talk about their 'friendly support.'"

In June, France helped Russia's delegation restore its credentials at the Parliamentary Assembly of the Council of Europe, five years after it was stripped of voting rights following the annexation of Crimea. Macron has also spoken about the prospect of Russia's eventual return to the Group of Seven, from which it was purged after annexing Crimea.

"Russia is the main beneficiary of that situation," Karasev said. "Putin no longer has to prove that Ukraine is dangerous and toxic — Ukrainian and U.S. politicians have done the job for him. The Kremlin now just needs to wait until the Ukrainian apple falls into its lap, as the U.S., Germany and France all have got their share of toxic Ukrainian gifts and got poisoned."

Yuras Karmanau in Kyiv, Ukraine, and Konstantin Manenkov in Moscow contributed to this report.