Deep in the dark North Carolina woods, a small white light flickers in the heavy underbrush. It's after midnight and a soldier is taking a risk by turning on his headlamp to find his way.

The overnight land navigation test is just one hurdle in the grueling, monthslong course to join the Army's elite Special Forces, and using the light violates the rules. Just the night before, at least 20 commando hopefuls had either committed a disqualifying failure or given up in the drenching rain.

"We got a light!" barks an Army instructor from the front seat of his truck as he patrols the woods. Almost instantly the tiny white beacon goes out as the soldier spots the truck headlights and tries to escape detection. 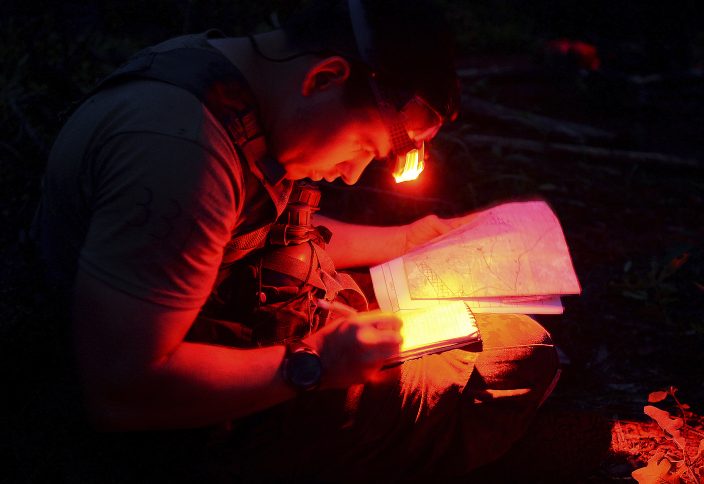 A soldier from the U.S. Army John F. Kennedy Special Warfare Center and School plots his next movement while completing the Special Forces Assessment and Selection night land navigation course near Hoffman, N.C., on May 7, 2019. Commanders are making big changes to the grueling course that soldiers must pass to join the elite Special Forces. The goal is to meet evolving national security threats and to shift from a culture that weeds out struggling soldiers to one that trains them to do better. (Ken KassensU.S. Army via AP)

For the nearly 200 candidates scrambling through Hoffman Forest at Camp Mackall, the struggle to become a Green Beret is real. But Army commanders are making sweeping changes to shorten and revamp the course. The aim is to meet evolving national security threats and to shift from a culture that weeds out struggling soldiers at every point to one that trains them to do better.

The changes that are beginning now have led to resentment among some Special Forces that the brass wants to make it easier to pass the qualification course as a way to boost lagging recruiting numbers and ensure that women will eventually qualify. The fear, such critics say, is that Green Berets will become weaker and "dangerously less capable than ever before."

Army leaders insist the changes reflect the military's need to adapt to evolving security threats from Russia, China, Iran and others foes. They say the nearly two-year course had to be shortened, so some training will be done when soldiers get to their units, where it can be tailored to the specific needs of the region. 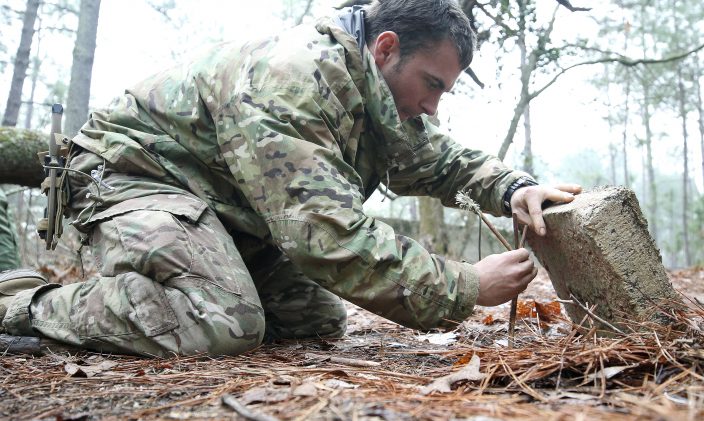 A student from the U.S. Army John F. Kennedy Special Warfare Center and School practices setting a paiute deadfall trap for small game during the survival phase of Survival Evasion Resistance and Escape Level-C training (SERE) at Camp Mackall, N.C., Feb. 28, 2019. Commanders are making big changes to the grueling course that soldiers must pass to join the elite Special Forces. The goal is to meet evolving national security threats and to shift from a culture that weeds out struggling soldiers to one that trains them to do better.(Ken KassensU.S. Army via AP)

"Today's qualification course is for exactly the type of Green Beret we needed for 2008. It is not what we need for 2028," said Maj. Gen. Kurt Sonntag, who until recently was commander of the Army Special Operations Center of Excellence, which includes all the Special Forces training. "We need to reestablish our forte, which is our ability to work with partner forces, developing their capabilities to provide an advantage for them and the United States against our adversaries — North Korea, Iran, and China and Russia."

Sonntag and other commanders, current and former instructors and students at the Special Forces training base at Camp Mackall spoke with The Associated Press during a rare, two-day look at the course, including observation of the overnight land navigation test.

The more than 6,700 Army Green Berets are highly trained commandos who usually work in 12-person teams that are often used for specialized combat and counterterrorism operations and to train other nations' forces in battle skills. About a dozen died in combat this year, mainly working with Afghan forces fighting the Taliban; others are training troops in up to 60 countries. 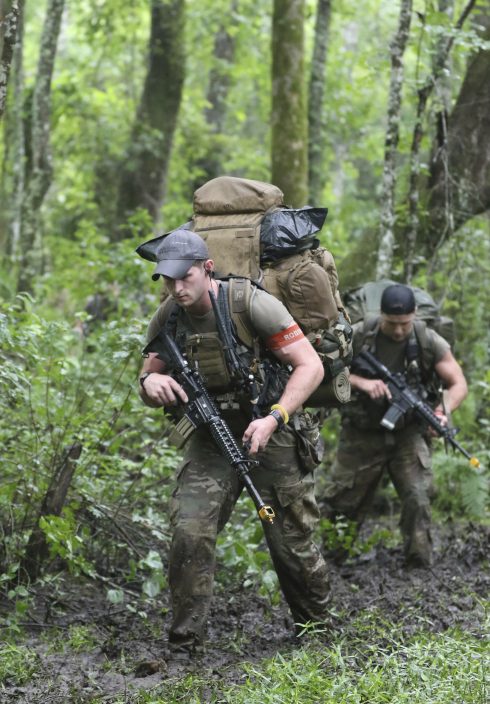 Special Forces candidates assigned to the U.S. Army John F. Kennedy Special Warfare Center and School patrol through a wooded area during the final phase of field training known as Robin Sage in central North Carolina, July 9, 2019. Robin Sage is the culmination exercise and has been the litmus test for Soldiers striving to earn the Green Beret for more than 40 years. Commanders are making big changes to the grueling course that soldiers must pass to join the elite Special Forces. The goal is to meet evolving national security threats and to shift from a culture that weeds out struggling soldiers to one that trains them to do better. (Ken KassensU.S. Army via AP)

The changes were driven by discussions with senior leaders, including Maj. Gen. John Deedrick, commander of 1st Special Forces Command, who told Sonntag he wanted soldiers to come out of the course with solid basic skills that can be sharpened when they get to their units.

"If you try to make them an expert in everything, you're gonna give me a Swiss Army knife that can do a little bit of everything but isn't real good," he said in an interview in his Fort Bragg office. "I'd prefer to have him very good at the basics and then let me tailor what he's gonna do in the long run."

The new course drops some training, shifts some around and eliminates gaps in the schedule. For example, language training will now come after soldiers graduate the course, becoming a skill to learn rather than one needed to pass to stay in the course.

Also, because the new Pentagon strategy is focused on threats from China and Russia rather than wars against insurgents, some counterterrorism skills will be tailored to specific regions and taught after soldiers are in their units.

Army Secretary Ryan McCarthy said Sonntag "really grinded through this to make adjustments to the course to make it more effective and streamline the amount of time they're in the schoolhouse" so they get to their assigned units more quickly. The new training, he said, will be more relevant to current threats.

The changes, however, caused an uproar among some instructors in the Special Forces community.

In a lengthy and anonymous 2017 email, a Green Beret instructor argued that "career-focused leaders" have eroded standards in the qualification course in order to meet graduation quotas. The email charged that allowing women to compete for special operations jobs was also responsible because commanders want to "markedly lower the standards enough to ensure that any woman attempting this path will have absolutely no issue achieving it."

It complained that soldiers who failed a skill or fitness test weren't weeded out, but allowed to continue or given a second chance.

The path to becoming a Green Beret consists of several phases, beginning with a grueling assessment and selection phase where commanders believe they can identify soldiers who cannot make the grade or do not belong. The bulk of those who try out fail. Some who get injured or fail are allowed to return and try again.

In the 2019 budget year, more than 3,000 soldiers showed up for the assessment phase, with 936 passing and going on to the qualification course. Of those, about 70 percent graduated and donned the Green Beret.

Sonntag said unqualified troops should be dropped. But that once soldiers make it through the assessment phase, the focus should be on training them to meet the standards.

Former instructors told The Associated Press that the course has changed often over the decades. Chris Zets, a retired Green Beret who worked as a course instructor, said the attrition rate shot up in recent years as the training expanded and instructors added more intermittent fitness tests and requirements. Commanders, including Sonntag, were asked to figure out why.

"You can ratchet it up and up and up and up to the point where you don't graduate anybody and nobody volunteers to come here," said Zets, who went through the course in 1979. "So, yeah, we've increased the standards, but then you don't have anybody going to the force. So there's a balancing act."

Under the new program, once soldiers pass the assessment phase, they move to small unit tactics and survival training, then four months of more specialized job instruction, and then six weeks of exercises and other training before graduation.

"I want somebody physically fit, culturally astute, morally straight, understands small unit tactics and how to apply that with a partner force. And someone who can problem solve. You give me that raw material coming out of the course and we'll do just fine," said Deedrick, the commander of 1st Special Forces Command.

Others, however, say the uproar over the changes was a troubling sign.

"The danger of one unqualified officer making it through to command a Special Forces team is a balance that requires difficult choices," said retired Brig. Gen. Donald Bolduc, a former Special Forces commander. He said some instructors were concerned with exceptions being made for some soldiers in the course. "If they are concerned, I am concerned," he said.

And, he said, the fact that they resorted to an anonymous email suggested they feared retribution or did not feel comfortable going to leadership.

In fact, several instructors associated with the email posting ended up facing discipline or getting forced out — triggering charges that Sonntag sought revenge for the criticism.

Senior Army officials said a board of inquiry into Sonntag's actions cleared him of any wrongdoing. In all but one case, officials and internal documents say, the soldiers were disciplined for infractions unrelated to the email, ranging from assault and travel fraud to being absent without leave and using government computers to promote a personal online business.

One soldier was charged with writing the email, lying about it and using his job to promote a personal business, the internal document said.

Officials, however, also acknowledge there were lingering concerns about Sonntag fostering a toxic command climate and failing to communicate well enough with the troops about the changes in the course. While he was cleared of wrongdoing, Sonntag was not promoted and instead has decided to retire, said the officials, who spoke on condition of anonymity to discuss personnel issues.