Congress is returning from a two-week recess on Tuesday, but some lawmakers barely left Washington.

Three House committees investigating impeachment worked through the break, issuing multiple subpoenas and holding depositions with State Department officials relevant to the inquiry . Democrats are investigating President Donald Trump's dealings with Ukraine and exploring whether he compromised national security or abused his office by seeking dirt from a foreign country on a political rival, former Vice President Joe Biden, a leading Democratic contender for the 2020 White House nomination.

That work will intensify when Congress gets back. House Speaker Nancy Pelosi , D-Calif., has said she wants the committees to work "expeditiously" as Democrats gather evidence and prepare to make a final decision on whether to vote to impeach the president. 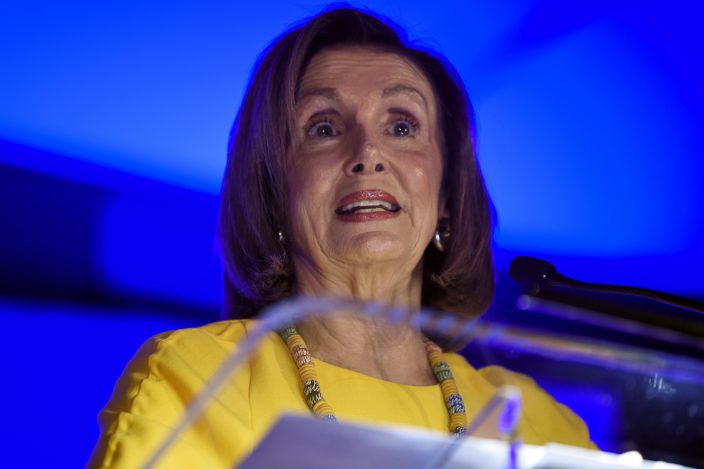 The impeachment probe was sparked by a whistleblower who revealed that Trump asked Ukraine's new president, Volodymyr Zelenskiy, to investigate Biden's family and Ukraine's role of in the 2016 election that put Trump in office. The calls to investigate Joe Biden and son Hunter have come without evidence of wrongdoing by either Biden, in either country.

Trump has defended his conduct as "perfect" and said he will refuse to comply with the inquiry.

FLURRY OF SUBPOENAS AND DEPOSITIONS

Despite Trump's assertions that he won't cooperate, some members of his administration are participating anyway.

Staff and lawmakers from the House Intelligence Committee, the House Oversight and Reform Committee and the House Foreign Affairs Committee have called in several State Department witnesses.

They have already heard from two: Kurt Bolker, a former envoy to Ukraine, and Marie Yovanovitch , a former ambassador to Ukraine. Each provided information that could be used against Trump as Democrats contemplate impeachment. 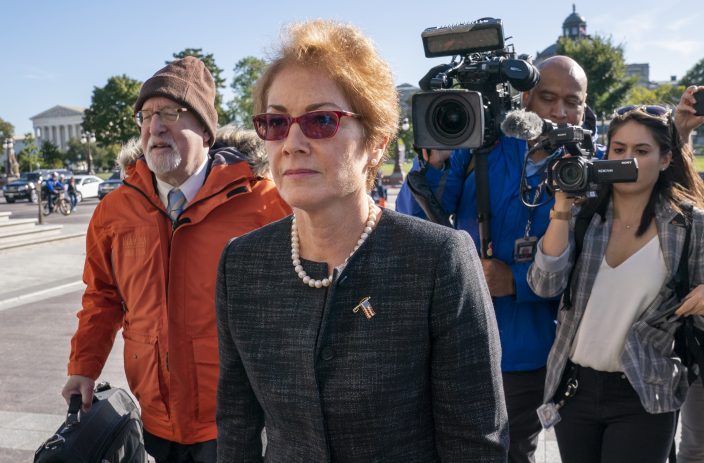 Former U.S. ambassador to Ukraine Marie Yovanovitch, arrives on Capitol Hill, Friday, Oct. 11, 2019, in Washington, as she is scheduled to testify before congressional lawmakers on Friday as part of the House impeachment inquiry into President Donald Trump. (AP PhotoJ. Scott Applewhite)

Fiona Hill, a former White House adviser who focused on Russia, is expected to appear in private on Monday, with plans for Gordon Sondland , the U.S. ambassador to the European Union, to follow on Thursday. Sondland didn't show up for a scheduled deposition last week after the State Department directed him not to come, but his lawyer said he would comply with a subpoena issued by the committees afterward.

Democrats want to ask Sondland about text messages provided by Volker that show the two of them acting as intermediaries as Trump urged Ukraine to start the investigations.

The committees are also seeking closed-door depositions with George Kent, the deputy assistant secretary of state in the European and Eurasian Bureau, and Ulrich Brechbuhl, a State Department counselor.

The committees have subpoenaed or requested documents from the White House, the Defense Department, the White House Office of Management and Budget, Vice President Mike Pence, Energy Secretary Rick Perry, Trump personal lawyer Rudy Giuliani and two Giuliani associates. The deadlines for most of those requests are this coming week.

The congressional intelligence committees have said they want to hear from the whistleblower and they have been in negotiations for a secret interview for several weeks. The talks have centered on how to protect the person, who is publicly unknown, and prevent retaliation, given that Trump has said he wants to know the person's identity. Congressional aides have even suggested somehow disguising the person so that person's identity wouldn't be revealed.

It's unclear whether that risky testimony will remain necessary as the Democrats obtain more information that they say backs up the person's account.

"We know a lot about the core conduct of the president," Democratic Rep. Sean Patrick Maloney of New York, a member of the House Intelligence Committee, said after Yovanovitch's appearance.

Yovanovitch told lawmakers that Trump himself pressured the State Department to oust her from her post and get her out of Ukraine. Maloney said she was fired "because she was a thorn in the side of those who sought to use the Ukrainian government for their own political and financial gain — and that includes President Trump."

DEMOCRATS STICK TO THEIR STRATEGY

Pelosi has been unflappable while Republicans have criticized her for declining to hold a vote to authorize the impeachment inquiry. The Constitution doesn't require one, but the House held such votes during the impeachment investigations of Presidents Richard Nixon and Bill Clinton.

In a conference call with the Democratic caucus on Friday, the issue didn't even come up, according to a person familiar with that private call who spoke on condition of anonymity to discuss it.

Democrats had a victory on Friday when a federal appeals court ruled that Trump's financial records must be turned over to the House.

The U.S. Court of Appeals for the District of Columbia Circuit said lawmakers should get the documents they have subpoenaed from the accounting firm Mazars USA, which has provided services to the president. Trump went to court to prevent Mazars from turning over the material.

The House Oversight and Reform Committee subpoenaed records from Mazars in April. They include documents from 2011 to 2018 that the House wants for investigation into the president's reporting of his finances and potential conflicts of interest.

The committee chairman, Rep. Elijah Cummings, D-Md., said on the Friday call with Pelosi that Democrats expect the Trump administration will do everything in its power to slow down the legal process. He predicted the case will go to the Supreme Court.

It's unclear whether Democrats will fight any of their impeachment battles in court. That might not be necessary because witnesses have begun to comply with subpoenas despite Trump's orders.

Republicans have little recourse in the impeachment inquiry, but they have focused their ire on Democrats and defended the president. They are expected to step up those efforts in the coming weeks.

Trump and Republicans on the investigating committees have said the White House should have more rights in the inquiry; for example, the ability for his lawyers to be present for interviews and to cross-examine witnesses.

"This process is a joke, and the consequences are huge," Rep. Lee Zeldin, R-N.Y., said Friday.