The Latest on the Tunisia presidential election (all times local): 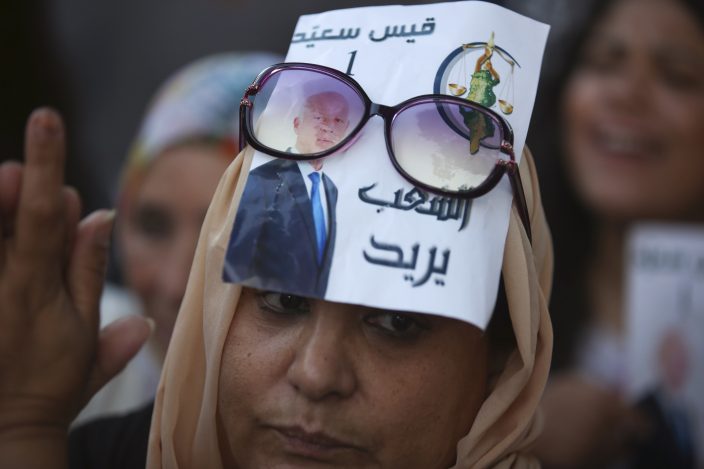 A supporter of independent Tunisian Presidential candidate Kais Saied attends a rally on the last day of campaigning before the second round of the presidential elections, in Tunis, Tunisia, Friday, Oct. 11, 2019. Poster in Arabic shows the number and slogan of Kais "People's wish." (AP PhotoMosa'ab Elshamy)

Saied's supporters exploded with joy, celebrating on the main boulevard of Tunis even though official results from Sunday's runoff vote aren't expected until Tuesday. It's only Tunisia's second democratic presidential election since it overthrew a dictator in the 2011 Arab Spring pro-democracy uprising.

Polls carried in Tunisian media by Sigma Conseil and Emhrod Consulting forecast that Saied would come out on top with between 72% and 77% of the vote. Rival Nabil Karoui, who was in jail for most of the campaign, was projected to win between 23% and 27%.

Saied, 61, is an independent outsider but is supported by moderate Islamist party Ennahdha, which won last week's parliamentary elections. He promised to hand more power to young people and local governments.

The winner will inherit a country struggling to revive tourism, create jobs and stem Islamic extremism.

Tunisians are voting for president in an unusual contest pitting a populist tycoon who just got out of jail against a law professor backed by resurgent Islamists.

The winner of Sunday's runoff vote will inherit a North African country struggling to overcome corruption, unemployment and sporadic extremist violence. Tunisians are also trying to stabilize the democracy they built from their 2011 Arab Spring uprising.

In Portugal, probes and attacks a routine for soccer cl ...