Lamar Jackson rambled, shimmied and passed his way through the winless Bengals, who were rendered powerless against the versatile and seemingly indestructible Baltimore quarterback.

Jackson ran for a career-high 152 yards and a touchdown, threw for 236 yards and guided the Ravens past hapless Cincinnati 23-17 on Sunday.

Alternatingly jutting left and right, up the middle and occasionally toward the sideline, Jackson carried 19 times (including three kneel-downs at the end). Tapering off his forays downfield at the end, Jackson finished tantalizingly short of Michael Vick's single-game record of 173 yards rushing by a quarterback. 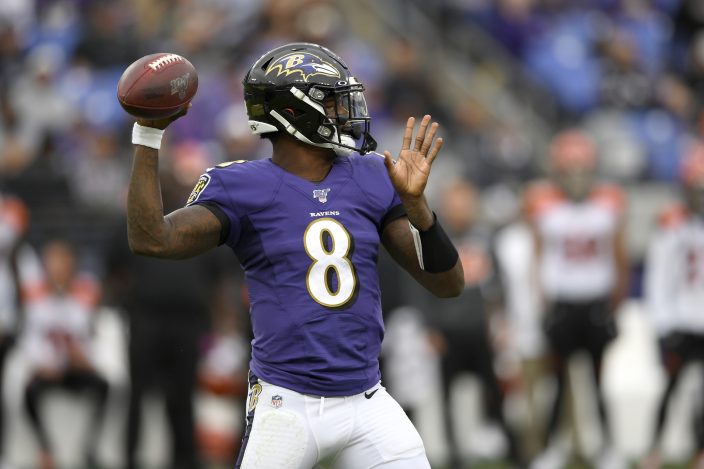 Baltimore Ravens quarterback Lamar Jackson looks to pass against the Cincinnati Bengals during the second half of a NFL football game Sunday, Oct. 13, 2019, in Baltimore. (AP PhotoNick Wass)

Jackson now has three career 100-yard rushing games, tied with Billy Kilmer for most by a quarterback in his first two seasons since 1950. Jackson's first 100-yard game came last November, in his first NFL start against the Bengals.

In this one, Jackson avoided trouble when possible but also took a few hard hits when forced to stay between the hash marks. Each time, he popped up with enthusiasm, ready to do it again.

Regardless of where Jackson went, the Bengals (0-6) were usually a step behind. 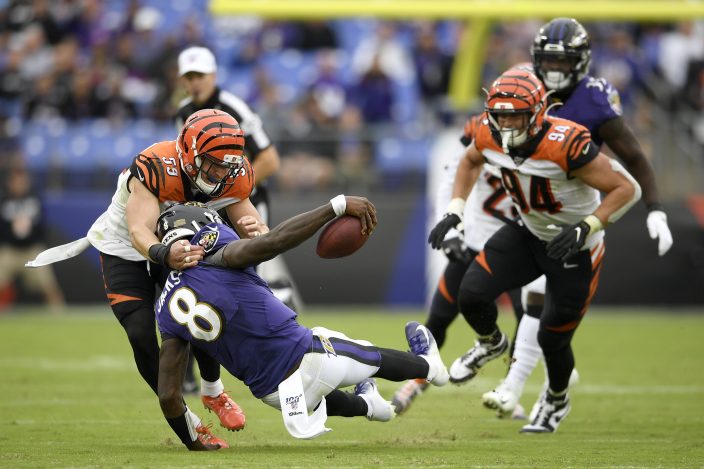 Jackson was also adept when throwing, going 21 for 33 without an interception.

Cincinnati jumped on top when Brandon Wilson took the opening kickoff 92 yards for a score, but Jackson responded quickly. Baltimore (4-2) finished with 497 yards of offense, and the Ravens retained sole possession of first place in the AFC North.

The Bengals, meanwhile, remain in search of their first win under first-year coach Zac Taylor. 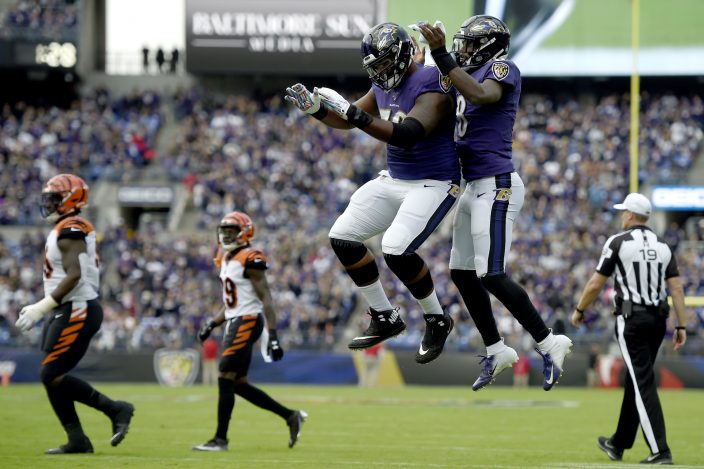 Andy Dalton went 21 for 39 for 235 yards and scored on a 2-yard run with 1:28 left. But Cincinnati failed to a produce an offensive touchdown over the first three quarters in a third straight game.

Baltimore compiled a 212-6 advantage in yardage and an 11-0 margin in first downs during the first quarter. Jackson led the way with 106 yards through the air and 85 on the ground.

The Ravens scored touchdowns on each of their first two possessions, a 21-yard run by Jackson and a 1-yard plunge by Mark Ingram. The quarter ended just before Justin Tucker kicked a 40-yard field goal for a 17-7 lead.

Baltimore Ravens running back Mark Ingram (21) dives in for a touchdown on a run as Cincinnati Bengals linebacker LaRoy Reynolds (55) and outside linebacker Nick Vigil (59) try to stop him during the first half of a NFL football game Sunday, Oct. 13, 2019, in Baltimore. (AP PhotoGail Burton)

Late in the half, the Bengals moved to the Baltimore 21 before Marlon Humphrey intercepted a deflected pass. The Ravens gave it back when tight end Mark Andrews fumbled while trying to hurdle a defender, and Cincinnati cashed in with a field goal.

Wilson's kickoff return for a touchdown was only the 11th allowed by the Ravens in their existence, and the first since Joe McKnight of the Jets went 107 yards on Oct. 3, 2011. It was also the first opening kick TD in the NFL since Pharoh Cooper's 103-yarder for the Rams against the Jaguars on Oct. 15, 2017. Finally, it was the first by Cincinnati since Bernard Scott against Pittsburgh in 2009. 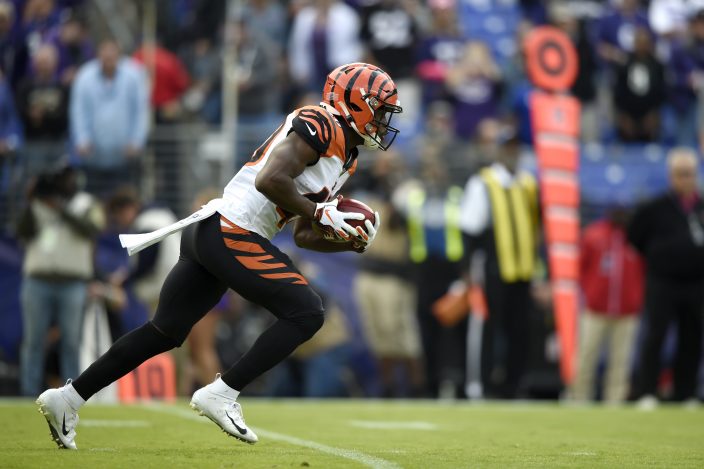 Cincinnati Bengals' Brandon Wilson runs uncontested while returning the opening kickoff from the Baltimore Ravens for a touchdown during the first half of an NFL football game Sunday, Oct. 13, 2019, in Baltimore. (AP PhotoGail Burton)

Bengals: CB Dre Kirkpatrick (knee) was carted off in the first quarter and did not return. ... G John Miller left in the second quarter with a groin injury. He did not return. ... OT Cordy Glenn (concussion) was inactive for the sixth consecutive week. 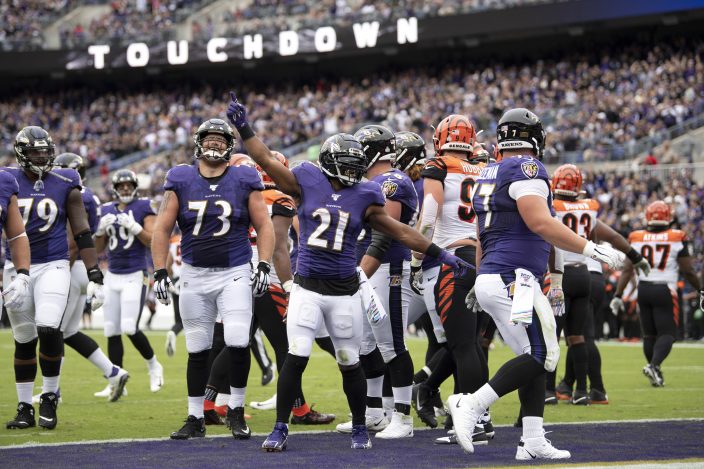 Baltimore Ravens running back Mark Ingram (21) reacts after scoring a touchdown on a run against the Cincinnati Bengals during the first half of a NFL football game Sunday, Oct. 13, 2019, in Baltimore. (AP PhotoNick Wass)

Bengals: Cincinnati takes another shot at getting its first victory next Sunday in a home matchup with Jacksonville.

Ravens: Baltimore faces the Seattle Seahawks on Sunday, the first meeting between the teams on the West Coast since 2011.

Ahead of an upcoming release of Ta ...

Another Portland protest broken up after activist' ...

The arrest during a Portland, Oreg ...

NFL ICYMI: Not only is Lamar Jackson a QB, he might be MVP