Racism and politics overshadowed results in European Championship qualifying on Monday as England's players were subjected to a barrage of racist abuse in Bulgaria and Turkey celebrated an equalizer against France by lining up to give a military salute.

The game in Bulgaria was halted twice because of fans directing monkey chants at England players, but the visitors played on despite the abuse and won 6-0 to move within one point on qualifying for next year's tournament.

In Paris, Kaan Ayhan's late equalizer for Turkey canceled out substitute Olivier Giroud's 76th-minute header to earn the visitors a 1-1 draw. After the goal, Turkey goalkeeper Mert Günok joined captain Burak Yilmaz and several other outfield players in giving a military salute toward the crowd — in apparent support of the Turkish-backed forces involved in the country's invasion of Kurdish-held regions in northern Syria. UEFA, which does not allow political gestures during games, had previously said it would investigate a similar salute performed by Turkey players in their 1-0 win over Albania on Friday. 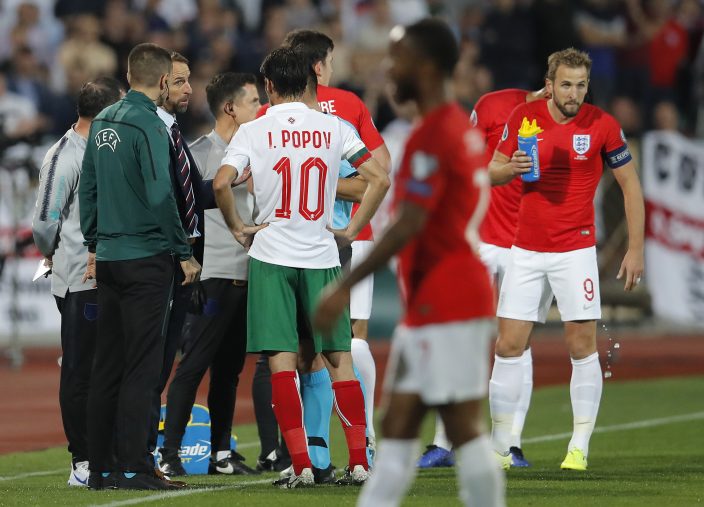 Away from those controversies, Ukraine booked its place in next year's tournament with a 2-1 win over Portugal in Kiev, despite Cristiano Ronaldo scoring his 700th career goal.

In Sofia, England was already 2-0 up when the game was halted for the first time in the 28th minute because of monkey chants aimed at England's black players, including defender Tyrone Mings and forward Raheem Sterling. The public announcer warned that the match could be called off completely unless the racist abuse stopped — the first step in UEFA's anti-racism protocol for games — but the game had to be halted again in the 43rd. 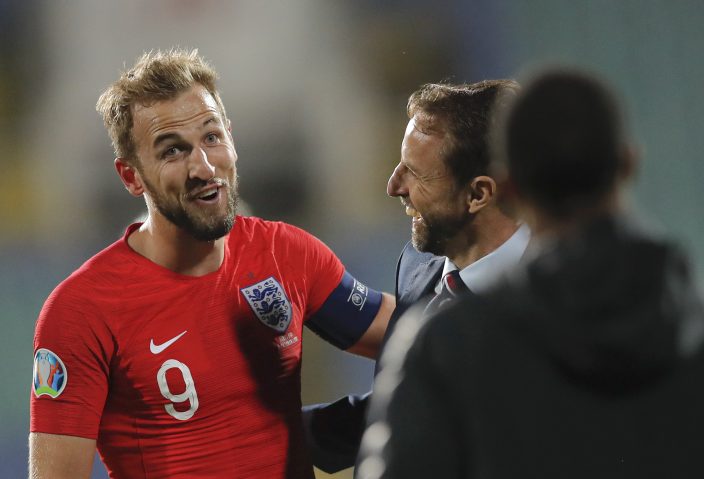 Bulgaria supporters in the crowd were also seen doing Nazi salutes and holding up shirts with the UEFA logo and the text "No Respect" — a reference to the European governing body's "Respect" campaign aimed at curbing racism in the sport. During the second break, several dozen of the Bulgaria fans involved in the chanting, many of them wearing dark hoodies, left the stadium.

The FA issued a statement saying the England players "were subjected to abhorrent racist chanting," which seemed to be aimed mainly at black players like Raheem Sterling and Tyrone Mings.

"This is not the first time our players have been subjected to this level of abuse and there is no place for this kind of behavior in society, let alone in football," the FA said. 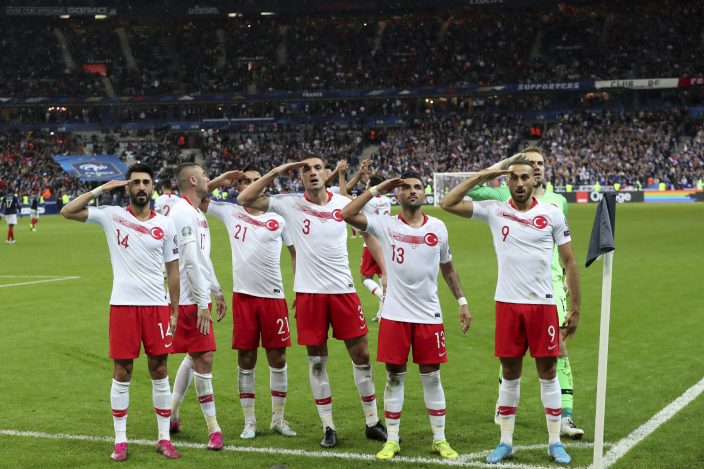 Sterling and Ross Barkley both scored twice for England, after Marcus Rashford had given the visitors and early lead. Harry Kane added the sixth goal in the 85th minute.

"We have made two statements by winning the game but also we have raised the awareness of everyone of the situation," England coach Gareth Southgate said. 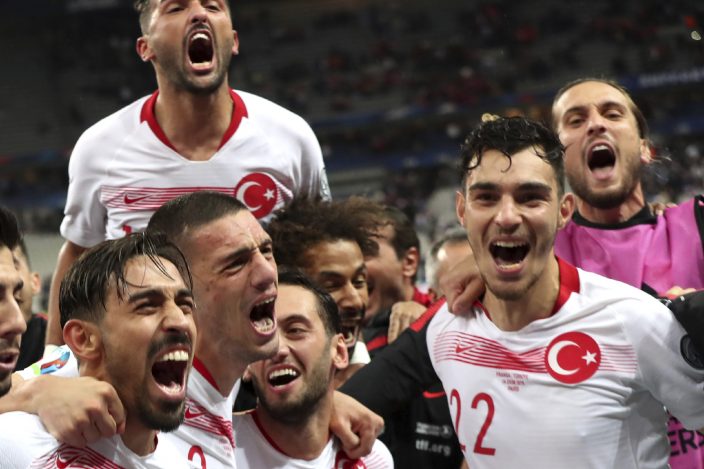 France looked set to take top spot in Group H when Giroud met a corner with a firm header just minutes after coming on as a substitute. But Ayhan equalized with a header from a free kick in the 82nd, sparking wild celebrations among the visitors. The Turkish player ran toward the corner flag, where several of them lined up to perform a salute.

The draw leaves France and Turkey tied on 19 points each, while Iceland kept alive its qualification hopes with a 2-0 win over visiting Andorra.

Iceland has 15 points and needs to beat Turkey in the next round.

The top two teams of each group advance. The other four qualifiers will come through four tiers of playoffs in March.

Ukraine qualified thanks to first-half goals from Roman Yaremchuk and Andriy Yarmolenko.

Portugal was frustrated by Ukraine's numbers in defense until Taras Stepanenko was sent off with his second yellow card for conceding a penalty for handball in the 72nd.

Ronaldo scored from the spot for his 700th career goal.

Ukraine sealed first place in Group B with 19 points, ahead of Portugal (11) and Serbia (10), who both have an extra game to play.

Serbia earned a 2-1 win in Lithuania.