Chicago Mayor Lori Lightfoot swept into office this spring declaring it "a new day" for the nation's third-largest city. She pledged to change the way City Hall operated under Rahm Emanuel and for decades before him, invest in poor neighborhoods, improve schools and address the city's deeply troubled finances.

But with teachers in Chicago Public Schools hitting the picket lines this week, Lightfoot finds herself facing many of the same challenges as her predecessor, the former White House chief of staff whose years of conflict with the Chicago Teachers Union included a seven-day strike in 2012.

About 25,000 teachers and staff were on strike for the second day Friday, after months of negotiations ended without a new contract between the union and CPS. The walkout has canceled classes for more than 300,000 students as the two sides wrangle over class sizes, pay and staffing for nurses and school social workers. Union officials said progress was being made at the bargaining table, but the strike could continue into next week. Mayor Lori Lightfoot speaks to reporters after passing out breakfast to Chicago Public Schools students at Gads Hill Center Friday, Oct. 18, 2019 in Chicago. Striking Chicago teachers have returned to the picket lines for a second day as union and city bargainers try to hammer out a contract in the nation's third-largest school district. (Ashlee Rezin Garcia Chicago Sun-Times via AP)

It is the biggest test yet for Lightfoot, who had never been elected to public office before she defeated more than a dozen candidates and won an April runoff in a landslide over a longtime political insider. It's also her opportunity to show how she is different from or better than Emanuel, whose City Hall she criticized heavily during the campaign.

But to get there, she may have to choose her own path: Does she ultimately acquiesce to teachers, whose demands she estimates may cost up to $2.5 billion per year? Or will she hold the line financially and risk alienating an influential force in Chicago politics?

Along with the strike, Lightfoot is dealing with other longstanding city problems, including how to close a budget shortfall of nearly $1 billion and address $30 billion in public-pension debt. 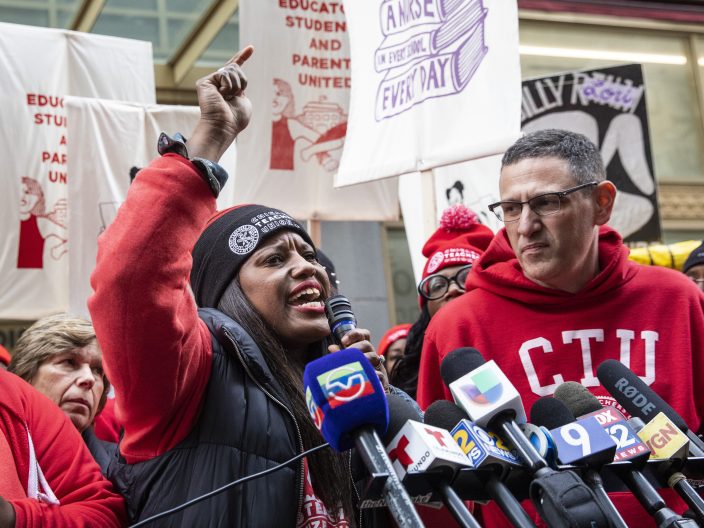 Chicago Teachers Union Vice President Stacy Davis Gates speaks during a rally outside Chicago Public Schools headquarters in the Loop, before marching through downtown with thousands of striking union members and their supporters, Thursday, Oct. 17, 2019, in Chicago. Striking teachers went on strike after their union and city officials failed to reach a contract deal in the nation's third-largest school district. (Ashlee Rezin GarciaChicago Sun-Times via AP)

"If she cannot land a deal with teachers for public schools in Chicago, then you have to question her ability to get work done in this city," said CTU Vice President Stacy Davis Gates.

Lightfoot rejects the suggestion that a prolonged strike might hurt her politically, saying "I don't look at it that way."

"This isn't about politics for me," the former federal prosecutor said.

The CTU backed Lightfoot's rival, a former teacher who now leads the Cook County Democratic Party and the county board, during the mayoral election.

They note Lightfoot, also a Democrat, promised during the campaign to transform a district that has seen declining enrollment and where more than three-quarters of students are low-income.

The union has argued for years that class sizes are too large — many classrooms have more than 30 students — and that they and their students don't have the support they need. Animosity also remains over Emanuel's decision to close dozens of schools , most in minority neighborhoods.

Yakirah Robinson, who teaches 4th and 5th grades, said she was optimistic when Lightfoot got elected because she thought she understood what teachers are up against. Robinson said she has 33 kids in her classroom, and many need extra help. She's disappointed but hopeful Lightfoot will come around.

Charlie Koltak, a music teacher at Orozco Community Academy, and who also has a 10-year-old child attending public school, does not put all the blame for the impasse on Lightfoot.

"This is still Rahm's team," he said of the CPS negotiating team and hierarchy, many of which are holdovers from when Emanuel was mayor. "It's just like (former President Barack) Obama said he would do all this progressive stuff and when he gets in there his hands are tied."

Jaime Dominguez, a Northwestern University political science professor, said Lightfoot is well-positioned to hold her ground against a union that's trying to take control of "every possible decision-making power they can have."

"She has the political currency right now to take a stand," he said. "She was elected by the whole city to usher in reform, and part of that reform is being financially cognizant of what's at stake in terms of resources."

Lightfoot insists she has made good on her campaign promises. She said the union had been signaling their intent to strike "for a long time" and that they had not shown an urgency to get a deal.

She also said she has to balance the needs of schools and students with her responsibility to taxpayers, and that she has been hearing from parents, teachers and other Chicago residents who say she has their support.

Jum’s words tumble out over the ph ...

Asia Today: China to let in more foreigners as virus re ...