A former beauty salon director who went public about sexual misconduct allegations against casino mogul Steve Wynn nearly two years ago is suing Wynn Resorts and company executives, alleging they invaded his privacy and spied on him at his next job in a bid to undercut his accounts.

Jorgen Nielsen, once a Wynn Las Vegas hairstylist, told the Wall Street Journal for a January 2018 report that no corporate action was taken after female resort employees informed company executives about sexual advances by Steve Wynn. 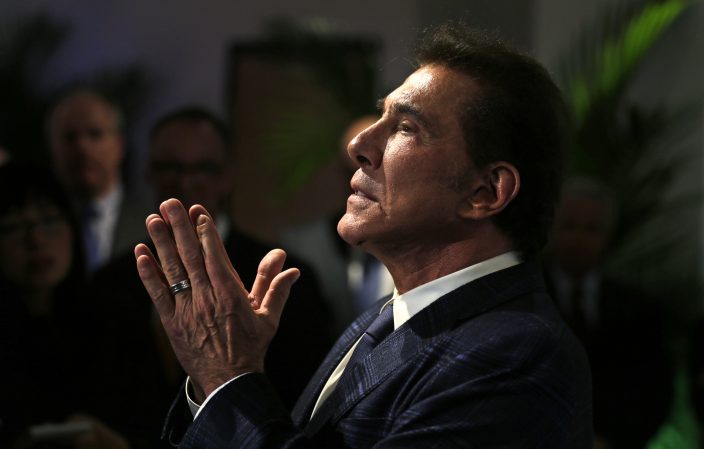 FILE - In this March 15, 2016 file photo, casino mogul Steve Wynn gestures during a news conference in Medford, Mass. A former beauty salon director from Las Vegas who went public about sexual misconduct allegations against casino mogul Steve Wynn is suing Wynn Resorts and executives, alleging they invaded his privacy and spied on him at his next job in a bid to undercut his accounts. (AP PhotoCharles Krupa, File)

Steve Wynn is not a named plaintiff in the lawsuit and has denied all allegations against him. His attorney, L. Lin Wood, did not immediately respond to telephone and email messages.

Nielsen's lawsuit points to testimony made public in April following an investigation by the Massachusetts Gaming Commission that Maddox and Sinatra approved Stern's plan to send what the lawsuit calls an "undercover operative" to pose as a customer and question Stern at his salon job at another resort.

The lawsuit alleges the company also admitted conducting surveillance in March 2018 on then-current Wynn salon employees "and the possibility that their surveillance activities would scare persons, like plaintiff Nielsen and those who would support and corroborate his statements, from speaking out."

Wynn Resorts said in a statement that Maddox testified before the Massachusetts regulators that "the company did not authorize any inappropriate surveillance activity."

"This lawsuit is without merit and we will vigorously defend ourselves against it," said the statement from spokesman Michael Weaver.

It added that Sinatra and Stern no longer work for Wynn Resorts. Contact information for them was not immediately found.

Nielsen worked at several Las Vegas hotels built by Wynn, who stepped down from his casino company in February 2018 — shortly after Nielsen was quoted commenting about employees' fears of Wynn.

Wynn followed with several defamation lawsuits, including one against Nielsen. It remains open in Clark County District Court in Las Vegas.

Nielsen's attorney, Kathleen England, cited other legal and regulatory actions in recent months involving Steve Wynn and Wynn Resorts. She said the company should "figure out how to proclaim that what Steve Wynn did was wrong," apologize to employees and commit to compensating victims.

The lawsuit points to a record $20 million fine the company paid in February to settle a Nevada gambling regulatory probe of claims that executives failed to investigate sexual misconduct claims against Wynn before he resigned.

Steve Wynn was not part of that settlement. The Nevada Gaming Commission had frozen his Nevada casino license, and the state Gaming Control Board this month filed a complaint that could ban him from getting it back.

In Massachusetts, regulators fined Wynn Resorts $35 million for failing while applying for a casino license to disclose years of allegations of sexual misconduct against Steve Wynn. Maddox was fined $500,000 more for failing to investigate at least one misconduct complaint.

The company was still allowed to open a Boston-area resort, renamed "Encore," after stripping Wynn's name from the marquee.

German leaders consider how to slow rise in virus cases

Chancellor Angela Merkel and the g ...

The Latest from the French Open (a ...