Gerrit Cole may get a chance to punch the Houston Astros' ticket to the World Series.

Only if Aroldis Chapman, Zack Britton and the rest of the New York Yankees' acclaimed relief corps force him to try.

After staving off elimination with a 4-1 victory Friday night in the Bronx, the Yankees plan to unleash their fearsome relievers in Houston on Saturday during Game 6 of this AL Championship Series. The Astros lead the best-of-seven set 3-2 and will also lean on their bullpen, saving Cole to pitch a potential Game 7 on full rest. 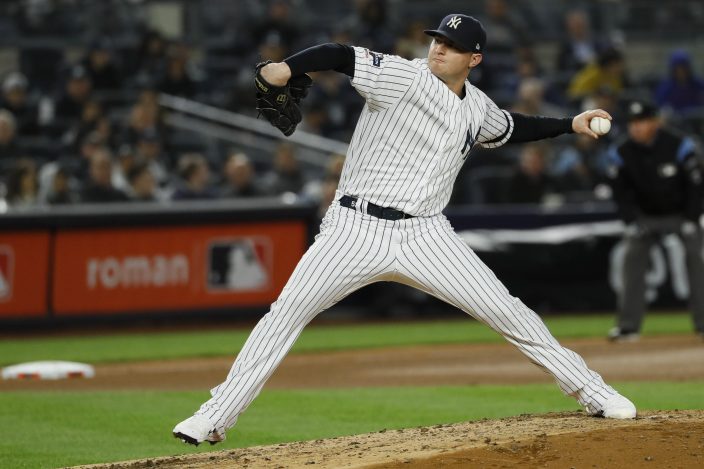 Hanging in the balance: a World Series date with the NL champion Washington Nationals.

"We obviously feel good about the bullpen days," Britton said. "We've had a lot of success doing it." 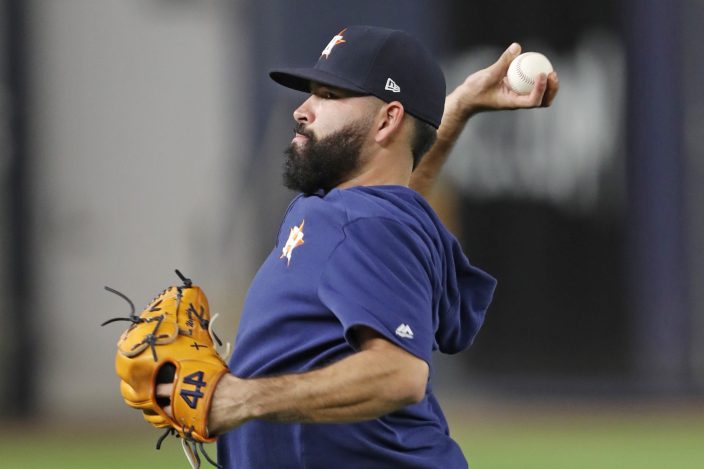 Houston Astros starting pitcher Jose Urquidy throws on the field during a brief workout, Monday, Oct. 14, 2019, at Yankee Stadium in New York, after arriving from Houston on an off day during the American League Championship Series against the New York Yankees. (AP PhotoKathy Willens)

Boone has been occasionally symphonic orchestrating matchups for those pitchers, as in Game 2 of this series. After starter James Paxton stumbled through 2 1/3 innings, the bullpen held Houston to two hits and one run over the next seven innings. Starter-turned-reliever J.A. Happ finally cracked in the 11th inning, allowing a game-ending homer to Carlos Correa.

New York's relievers own a 2.27 ERA this postseason, helped by three scoreless innings to close out Game 5. Britton retired five straight on 18 pitches, and Chapman threw nine pitches in a perfect ninth.

"We'll just do our best to piece it together," Boone said. 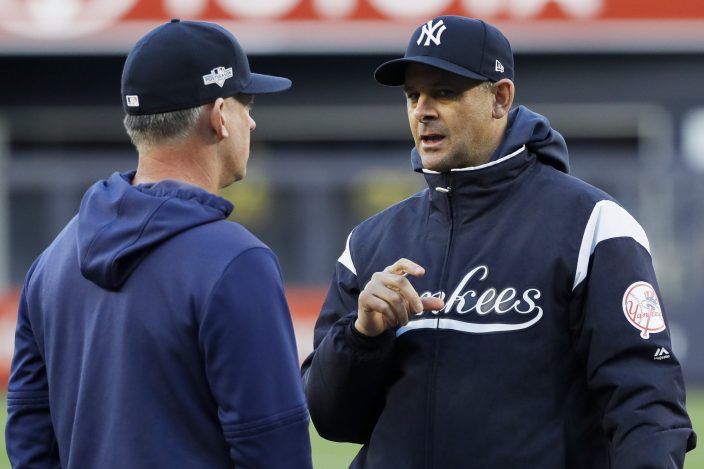 Boone has managed workloads for all those relievers carefully this season. None has pitched three consecutive days in 2019. That figures to change this weekend if New York manages to advance. When Paxton covered six innings Friday, it meant Boone never had to warm up Green or Ottavino.

"At this stage, I'm going to do whatever it takes to win," Britton echoed.

The Astros will take a different tact in their first game this series without Cole, Justin Verlander or Zack Greinke on the mound.

Steady-handed rookie José Urquidy will likely backbone Houston's pitching plans. Hardly a prized jewel in Houston's farm system entering the year, the 24-year-old from Mexico hadn't pitched above Class A before this season, yet he shot through Double-A and Triple-A to crack the postseason roster. He could cover multiple innings in relief, or be utilized as a short-term starter.

Behind him, Roberto Osuna, Will Harris and Ryan Pressly form an imposing trio of their own.

Perhaps the biggest challenge for both teams: neither Boone nor Astros manager AJ Hinch has said which pitcher will go first.

"You'd like to know the night before," Yankees slugger Aaron Judge said. "But if we find out in the morning, we'll do our homework and get ready."

The Yankees relief unit has been far from perfect this October. For the first time this postseason, Green and Kahnle each proved hittable this week — Green allowed a three-run shot to Correa in Game 4, and Kahnle ended a run of 15 consecutive batters retired by allowing a hit and a walk while getting one out in Game 5.

Ottavino is the biggest wild card. After posting a 1.90 ERA in the regular season, the right-hander has failed to retire a batter in four of his seven appearances in these playoffs. He opened the month as Boone's primary weapon against other team's best right-handed hitters. In a must-win Game 5, he never even got loose.

Urquidy showed off sharp command and a fading changeup while going 2-1 with a 3.95 ERA in nine games — seven starts — during the regular season. In his only postseason appearance, the right-hander pitched 1 2/3 scoreless innings in Game 4 of the AL Division Series against Tampa Bay, working around three hits, a walk and a hit batter.

Houston doesn't have the same depth as New York, but Osuna, Pressly and Harris are formidable options. Osuna and Harris have been nearly perfect this postseason, and Pressly seems to have shaken off rust following a late-season knee injury. He struck out two to strand the bases loaded during Game 4.

"We'll talk about it on the plane ride home," he said.

He's more certain about his lineup. In particular, slumping slugger Yordan Álvarez won't be benched, even thoug the rookie is 1 for 19 in the series with 10 strikeouts.

Stuck in Spain, Wuhan soccer team gets to watch Madrid- ...

It’s been a tough journey for the ...

The most senior civil servant at t ...