It's one thing to beat the All Blacks in Chicago or Dublin. It's an entirely different challenge taking them on in the Rugby World Cup, where they feel right at home.

Two-time defending champion New Zealand scored seven tries in a 46-14 demolition of Ireland on Saturday to move into a semifinal against England.

The result was virtually beyond doubt by halftime, when the All Blacks led 22-0, and the continuance of two opposing streaks seemed certain. 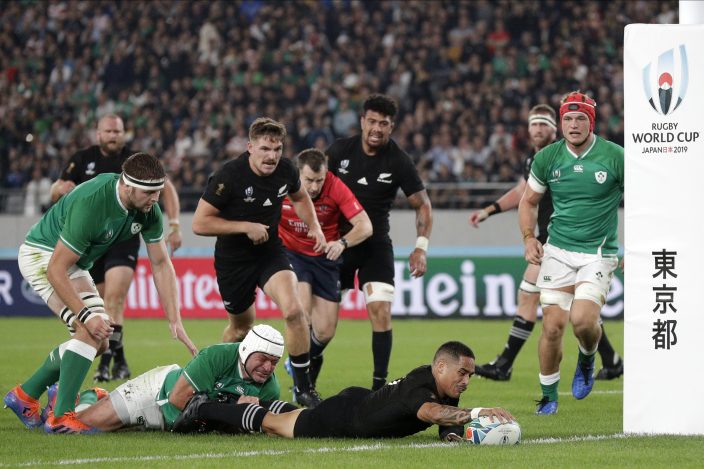 New Zealand hasn't lost a World Cup game since a quarterfinal upset loss to France in 2007. Ireland is still yet to win a World Cup knockout game after eight attempts.

The Irish may never have felt more confident, after breaking their century-long drought with a win over the All Blacks in Chicago in 2016 and winning again in Dublin last November.

They were ranked No. 1 coming into the tournament, but were never in the contest in the quarterfinal at Tokyo Stadium. 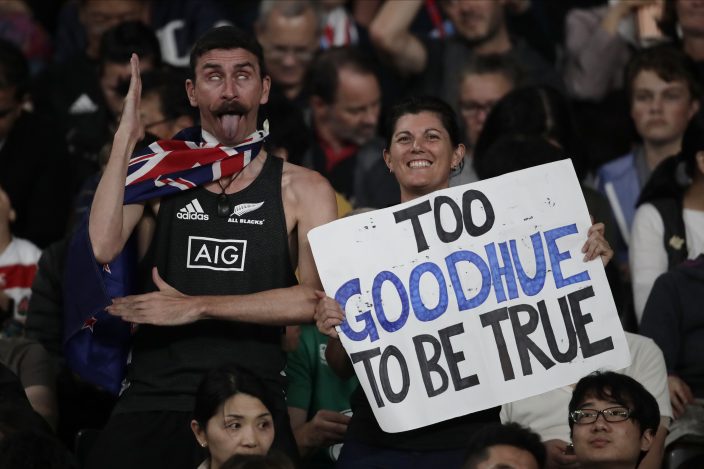 Aaron Smith crossed for a pair of tries from close range and Beauden Barrett finished off a long-range try against the run of play in the first half, and the All Blacks added four more tries in the second half by Codie Taylor, Matt Todd, George Bridge and Jordie Barrett.

Robbie Henshaw bombed a try in the 67th minute when he chased a perfectly placed grubber kick into the in-goal but knocked out, in an error that epitomized Ireland's night to that point.

He made amends quickly after an attacking, midfield scrum, the ball coming to Henshaw on the right, before he stepped inside and dived over under the posts. The Ireland center raised his fist in celebration but it was really a consolation that reduced the margin at that point to 41-7. 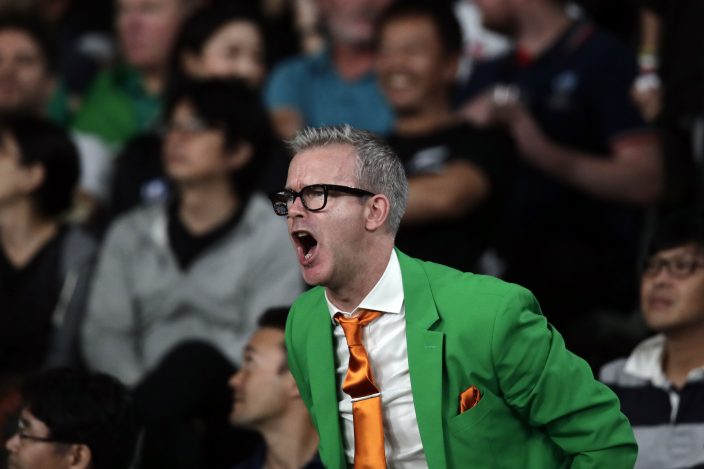 Halves Smith and Richie Mo'unga were crucial in getting New Zealand off to a flyer.

Flyhalf Mo'unga opened the scoring with a penalty goal in the 6th and scrumhalf Smith darted over twice from close range in the 14th and 20th minutes. Smith's second try followed an attacking raid involving a perfect pop pass from center Jack Goodhue to right winger Sevu Reece chiming in perfectly and sending it wide to Bridge, who was tackled within meters of the left corner post. 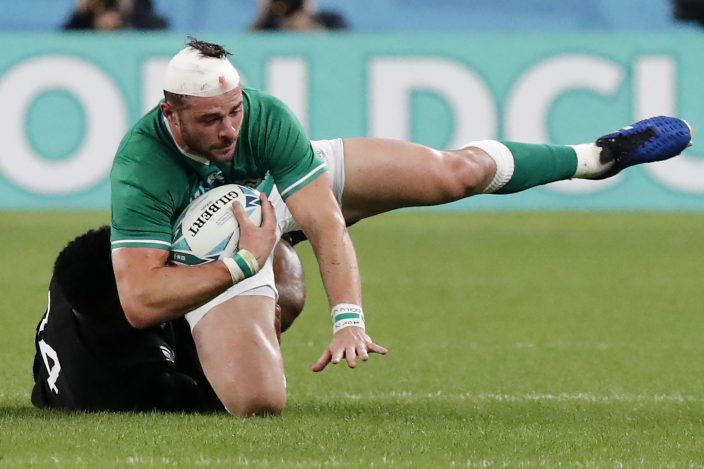 A piece of Mo'unga athleticism, when he leaped high to tap an attempted touch-finder from Ireland back into his in-goal to prevent a close-range lineout, kept New Zealand out of trouble before he contributed to his team's third try.

Ireland was in prime attacking position but fumbled the ball after a mixup between Johnny Sexton and Rob Kearney in the 32nd. Mo'unga hacked it forward off the ground for Barrett to chase, and the fullback toed it forward again before regathering as he dived over to score in the right corner. Mo'unga missed with the conversation attempt, his only blemish off the tee in the first half.

Hooker Codie Taylor was in the right place to score beside the posts in the 48th, strolling over after Ardie Savea and Kieran Read went close to scoring.

A Mo'unga cross-field kick in the 61st was well caught by an unmarked Reece in the right corner, but he was dragged down before Todd scored off the next phase to make it 34-0.

Ireland captain Rory Best's international career finished soon after, when he was replaced in the 63rd minute and left the field with tears in his eyes, knowing there was no chance for his team to advance another week.

Instead it will be New Zealand playing England, which beat Australia 40-16 earlier Saturday in Oita.

China blasts US for Taiwan visit while virus spreads at ...

A Chinese official lashed out at U ...