The Mexican city of Culiacan lived under drug cartel terror for 12 hours as gang members forced the government to free a drug lord's son, but in many parts of Mexico, the government ceded the battle to the gangs long ago.

The massive, rolling gunbattle in Culiacan, capital of Sinaloa state, was shocking for the openness of the government's capitulation and the brazenness of gunmen who drove machine-gun mounted armored trucks through the streets.

But in state after state, the Mexican government long ago relinquished effective control of whole towns, cities and regions to the drug cartels. 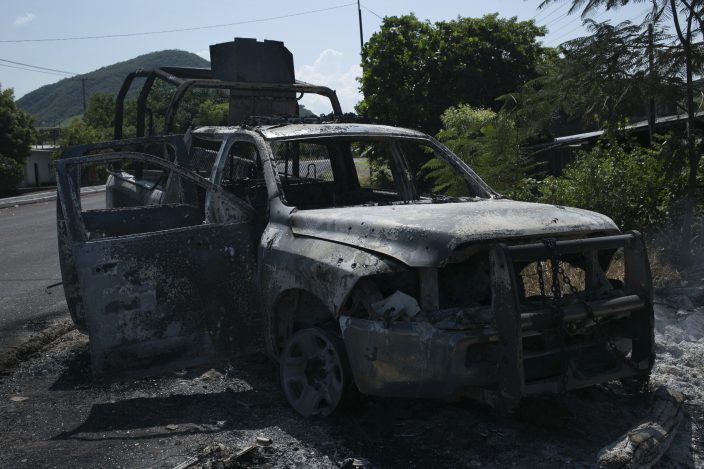 A charred truck that belong to Michoacan state police stands on the roadside after it was burned during an attack in El Aguaje, Mexico, Monday, Oct. 14, 2019. At least 13 police officers were killed and three others injured Monday in the ambush. (AP PhotoArmando Solis)

"They are the law here. If you have a problem, you go to them. They solve it quickly," said a young mother in the town of El Aguaje, in western Michoacan state. El Aguaje is so completely controlled by the Jalisco New Generation Cartel that the young wife of lime-grove worker — who would not give her name for fear of reprisals — can't turn to police: They are too afraid to enter the town.

When a convoy of Michoacan state police did make a rare appearance in El Aguaje last Monday, they were ambushed and slaughtered by Jalisco cartel gunmen. Thirteen state police officers were shot or burned to death in their vehicles.

When police returned to recover the burned-out patrol vehicles the next day, they were in such a hurry to accomplish their task that they left behind the crushed, burned, bullet-pierced skulls of one of their colleagues lying on the ground.

In the neighboring town of El Terrero, meanwhile, the rival New Michoacan Family cartel and its armed wing, the Viagras— who control that side of the river — have daubed their initials on houses and lamp posts, and last week burned several trucks and buses to block the bridge and prevent a Jalisco cartel incursion.

In some cases, the government has even defended cartel boundaries, apparently as part of its strategy of avoiding bloodshed at all costs.

For example, in the Michoacan town of Tepalcatepec, police line up every day to man a checkpoint at a highway leading into Jalisco state to prevent an armed incursion by Jalisco cartel gunmen. The problem is that the government force is working in coordination with a vigilante group allied with a drug cartel. The vigilantes are posted on a nearby hilltop where they can watch over the highway, armed with .50 caliber sniper rifles.

In Guerrero state, to the east of Michoacan, soldiers and state police man checkpoints between rival gangs of vigilantes, many of which are allied with drug gangs. Soldiers allow vigilantes armed with assault rifles to roam freely, but not to invade each other's territories.

And in the northern state of Tamaulipas, when the United States began returning asylum seekers to wait for hearings in Mexico, the government knew it couldn't protect the migrants from the Zetas drug cartel in the border city of Nuevo Laredo and so it simply bused them out of the city. Now known as the Cartel of the Northeast, the former Zetas control Nuevo Laredo so completely that they recently ordered local gas stations to refuse to sell gasoline to army vehicles.

In many regions, cartels enriched by drug profits have held extensive control for at least a decade, buying off or cowing law enforcement and building huge arsenals, along with networks of informants to protect narcotics routes from the government or rivals.

The cartel grip in Tamaulipas was so firm by 2011 that Zetas gunmen were able to kidnap almost 200 people from passing buses and kill them even as the passengers' unclaimed luggage kept piling up at local bus stations. Nobody reported the crimes for months.

In this context, the government's decision to release drug lord Ovidio Guzmán — son of imprisoned capo Joaquin Guzmán Loera — after the Culiacan shootouts was striking only because the government so publicly dropped even the pretense of enforcing the law.

"It's not unprecedented for Mexican authorities to pick up a major capo and then release him; that's actually unfortunately too common," said David Shirk, a political science professor at the University of San Diego. "But what's really unprecedented is to openly acknowledge that state does not have the capacity or the stomach for to keeping a major capo behind bars because of the potential consequences."

"But what message does it send to people who are under the yoke of criminal organizations all over Mexico?" Shirk asked. "I think the message is, 'You're on your own. We're not going to come in and rescue you because you could get killed in the process.'"

The message to soldiers in the Mexican army is also pretty clear: The Defense Department blamed a military squad for the "rushed" operation to arrest Ovidio Guzmán that set off the Culiacan gun battles and pledged to investigate and punish the leaders of the squad.

President Andrés Manuel López Obrador, who took office less than a year ago, has repeatedly urged military restraint, saying his predecessors' hardline confrontation strategy in gang-controlled areas "turned this country into a cemetery, and we don't want that anymore."

Earlier this year praised a squad of soldiers for restraint after they were kidnapped and forced to return a .50 caliber rifle seized by a previous patrol. He defended the response to the Culiacan uprising by saying, "The capture of one criminal cannot be worth more than the lives of people. ... "We do not want deaths. We do not want war."

Hence, soldiers are likely to avoid taking any initiative, slide into a passive role and do anything to avoid bloodshed.

Average citizens in many zones, meanwhile, can only hope the most benign cartel comes to rule in their town. The problem is that almost all of the cartels promise to respect the local population and not kidnap them or shake them down for protection money. But all of the gangs eventually break that promise.

It thus becomes a question not of fighting the cartels, but accepting whichever seems the least malign at any given moment. And the gangs appear to be picking up on that message.

When the Jalisco cartel left the bodies of 19 members of a rival gang scattered on an overpass in the Michoacan in August, they left behind a banner saying "We are not a threat ... Beautiful people, go on about your routine."

On Friday, after the Culiacan gunbattles, José Luis González Meza, a lawyer for the family of Ovidio's father, the imprisoned drug lord known as "El Chapo," said the family "apologizes" for the shootouts and pledged, "They will take care (of the expenses) of the wounded and the dead. ... However many there were, man, no problem, they will help them economically."

"In his (Guzman's) territory ... there are no protection payments charged to taxi drivers, or bus drivers," said González Meza, referring to extortion commonly practiced by other gangs. "Every two weeks, he draws up a list of poor people and sends it to stores, telling them to cancel their debts."

And the message for the rest of the world? Don't expect Mexico to help capture or extradite drug lords anymore, as the country did with the elder Guzmán.

"It does send a very sobering signal, I think, to Mexico and arguably to Mexico's U.S. partners," said Shirk. "If I were going to write the next State Department advisory for Mexico, I would dramatically increase this number and the number of advisories that I had for different parts of Mexico, because it's very clear that the federal government is ceding territory ... and not just rural territory, but major cities and perhaps even entire states to drug traffickers."

Pakistan won the toss and opted to ...