Long after more flamboyant colleagues flamed out of President Donald Trump's favor amid ethics scandals, low-profile and folksy Rick Perry survived in the Cabinet in part by steering clear of controversy.

The former Texas governor said Thursday he was quitting as energy secretary by year's end. The announcement came as the House impeachment investigation highlighted his work in Ukraine, where he promoted U.S. natural gas and where Trump hoped to find dirt on Democratic rival Joe Biden. 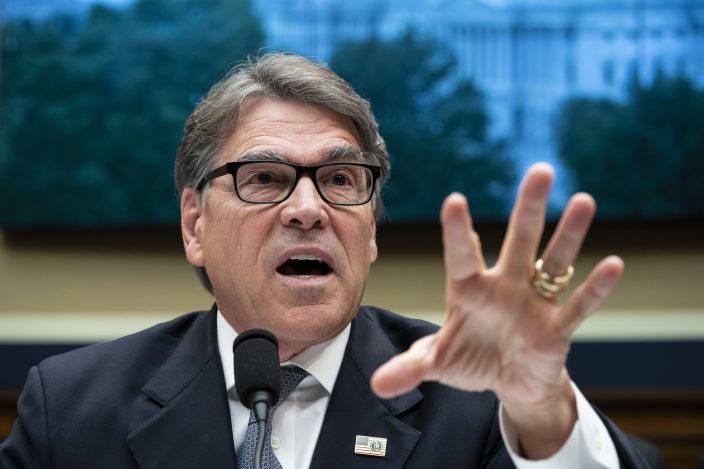 Trump said that Perry, one of his longest serving Cabinet members, had planned for months to leave. But the timing of the announcement of Perry's departure fits a Trump pattern, said governance expert Kathryn Dunn Tenpas of the Brookings Institution. Her work shows there has been more turnover in Trump's Cabinet than under any president since at least Ronald Reagan.

"The more important the issue is to the president, the more likely you're on the chopping block," Tenpas said.

No evidence has emerged that Perry explicitly pressured Ukrainian officials to comply with Trump's push to investigate a Ukraine natural gas company where Biden's son Hunter was a board member. It's a central part of the impeachment investigation. 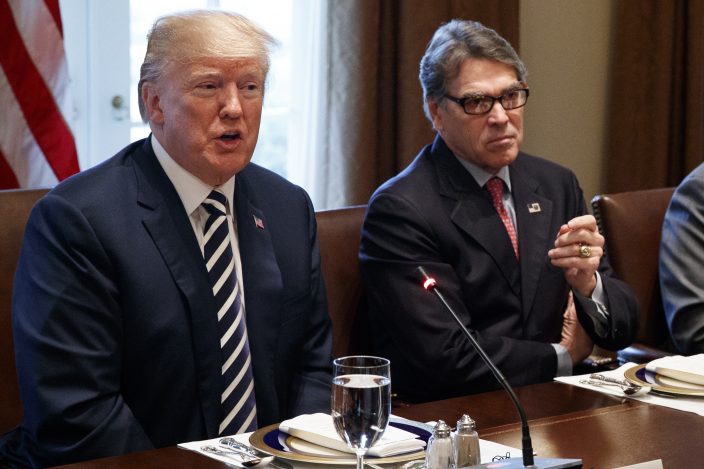 Perry, an evangelical who takes part in weekly Cabinet Bible studies, told a Christian broadcast news outlet his month that, "God as my witness," he never heard any administration figure specifically mention either Biden in discussions about corruption investigations in Ukraine.

Perry did publicly pressure Ukraine's president, Volodymyr Zelenskiy, for unspecified reforms "in the energy sector," however, including in comments at Zelenskiy's May inauguration.

That was one of several Perry trips and meetings putting him in contact with Ukraine and U.S. figures playing pivotal roles in the actions now being studied by the House committees investigating impeachment.

Perry also was present for at least part of a White House meeting in July with then-natural security adviser John Bolton and other U.S. and Ukrainian officials. Perry, at the time, tweeted out a photo of the group lined up in front of the White House and called it a "productive discussion."

Trump is trying to block members of his administration from testifying before lawmakers who are investigating whether Trump used the powers of his office for personal political aims in Ukraine. The Energy Department on Friday refused to comply with a House subpoena for Perry.

Perry's public mission in Ukraine was in line with U.S. and European policy in place before the Trump administration: "flood" Europe with imported natural gas, as Perry said in a video in 2015, even before Trump won office. The policy is designed to help Ukraine and other Eastern European countries escape the political dominance that Russia's control of the region's energy supply has helped give Moscow.

Perry's Texas roots gave him ties with the oil and gas companies exporting to Europe. But there are no allegations that Perry improperly arranged natural gas deals to benefit oil friends.

Corruption in Ukraine can make doing business there dodgy, and Ukraine lacks the giant natural gas terminals and other facilities to import much natural gas shipments directly, energy experts say. That's made it less of a targeted customer for Western natural gas sales than, for example, Poland.

Poland has done much better economically than Ukraine since the breakup of the Soviet Union, enabling Polish leaders to win favor with Trump by buying U.S. warplanes and natural gas.

Perry has acknowledged that he consulted on Ukraine matters with Trump's personal lawyer, Rudy Giuliani. Giuliani served as one of Trump's main, back channel movers in the administration's 2020-related political efforts in Ukraine, in talks bypassing official U.S. government channels.

The U.S. has indicted associates of Giuliani on allegations they illegally tried to funnel cash to Republican politicians, using a natural gas company as a front. It's part of the tangle of business and political administration efforts in Ukraine that impeachment investigators are trying to unravel.

The world Perry moves in as he promotes U.S. natural gas is rife with fringe characters, says Edward Chow, an expert in Eastern European and international energy at the Center for Strategic and International Studies, a think tank.

"There's always these middlemen. Usually they present themselves as having some kind of political connections. Ninety-nine percent of these middlemen never score a deal," Chow said. "They talk about billion-dollar deals, and it's like, "Yeah? What's your bank number?'"

Publicly, Perry moved through that world as a champion of U.S. energy and energy policy, advocating for American oil and gas and coal, a Trump priority, but also encouraging countries to build up solar, wind and nuclear power.

James Melville Jr., U.S. ambassador to Estonia until he resigned last year in protest of Trump's treatment of European allies, said he was "positively impressed" by Perry, in some ways, in their one encounter at an event on Baltic states.

Perry "was friendly, he was cordial, he was talkative," and willing to meet Estonian officials that Melville brought over to introduce.

"He struck me very much as a politician," Melville said. "Broad knowledge but not very deep" when it came to science-heavy matters under Perry's stewardship as energy secretary.

Before now, Perry's defining national moment came as a presidential candidate, when he forgot the name of the Energy Department in a 2011 debate as he was listing Cabinet agencies he wanted to eliminate.

As energy secretary, by most accounts he has been an active and eager leader, visiting the country's research labs and touring power plants. He worked well with lawmakers, in a job that required him to appeal annually to Congress for money for projects despite Trump's own call for cuts.

"The coolest job I've ever had," he said in his departure video Thursday.

Perry stayed low-key with policy aims that ran counter to the president's likes, tamping down public shows of support for the wind turbines he had promoted as Texas governor, for example.