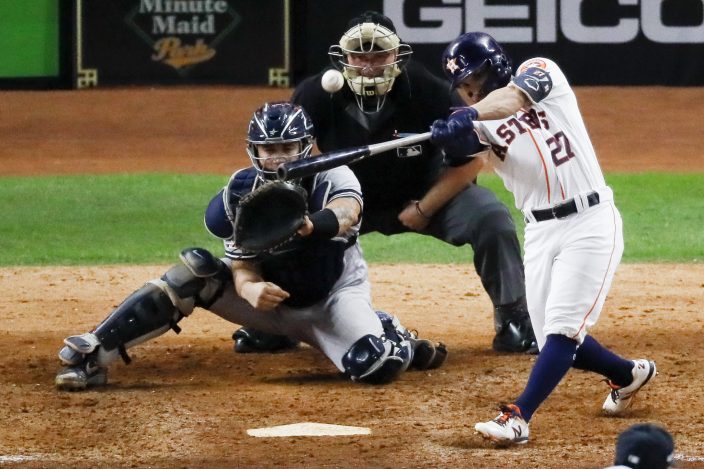 UNITED-STATES-SYRIA _ Defense Secretary Mark Esper says under current plans all U.S. troops leaving Syria will go to western Iraq and the military will continue to conduct operations against the Islamic State group to prevent its resurgence. Speaking to reporters traveling with him to the Middle East, Esper did not rule out the idea that U.S. forces would conduct counterterrorism missions from Iraq into Syria. But he said those details will be worked out over time. By Lolita C. Baldor. SENT: 790 words, photo. With SYRIA _ One Turkish soldier killed, amid shaky cease-fire in Syria (sent).

TRUMP-DORAL _ Responding to stinging criticism, President Donald Trump abruptly reversed his plan to hold the next Group of Seven world leaders' meeting at his Doral, Florida, golf resort next year. Trump announced a rare backtrack after facing accusations that he was using the presidency to enrich himself by hosting the international summit at a private resort owned by his family. By Zeke Miller and Jill Colvin. SENT: 530 words, photo. 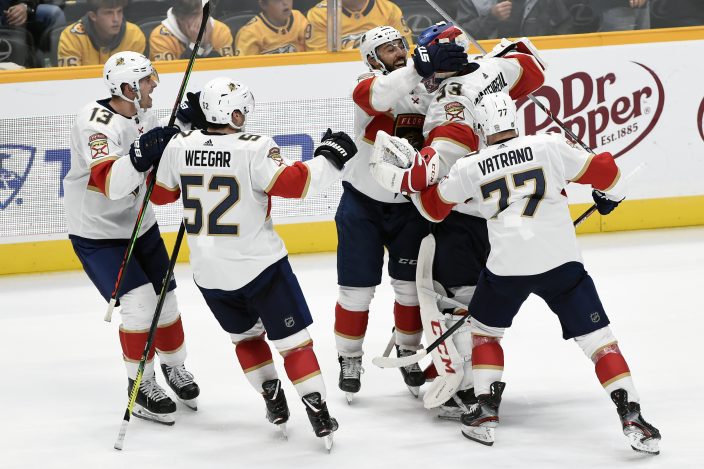 Florida Panthers goaltender Sam Montembeault (33) celebrates with teammates after the team's win against the Nashville Predators in a shootout in an NHL hockey game, Saturday, Oct. 19, 2019, in Nashville, Tenn. The Panthers won 3-2. (AP PhotoMark Zaleski)

BREXIT _ British Prime Minister Boris Johnson is pressing ahead to try to win parliamentary backing for his new Brexit deal even as the European Union considers his grudging request to extend the looming Oct. 31 Brexit deadline. By Gregory Katz and Mike Corder. SENT: 710 words, photos. With BREXIT-THE LATEST.

TRUMP-ANALYSIS _ The impeachment investigation into President Donald Trump has thrust Washington into a political crisis. And Trump keeps adding to the chaos. In the four weeks since House Speaker Nancy Pelosi, D-Calif., launched the investigation, Trump has taken steps that have drawn more criticism, not less, repeatedly testing the loyalty of his stalwart Republican allies. A News Analysis by Washington Bureau Chief Julie Pace. SENT: 1,030 words, photos.

TROPICAL WEATHER _ Nestor races across Georgia as a post-tropical cyclone, hours after the former tropical storm spawned a tornado that damaged homes and a school in central Florida while sparing areas of the Florida Panhandle devastated one year earlier by Hurricane Michael. SENT: 490 words, photos.

EMMETT TILL MEMORIAL _ A new bulletproof memorial to Emmett Till is dedicated in Mississippi after previous historical markers were repeatedly vandalized. The brutal slaying of the 14-year-old black teenager helped spur the civil rights movement more than 60 years ago. SENT: 390 words, photo.

SOONER-SCHOONER-CRASH _ University of Oklahoma officials say there were no injuries to riders of the school's “Sooner Schooner” or the horses that pull it when the miniature covered wagon tipped over during the Oklahoma-West Virginia football game. SENT: 160 words, photos.

GUNMAN TACKLED _ Authorities release a video that shows part of a former Oregon football star's successful effort to disarm a student who brought a shotgun to a Portland high school. SENT: 140 words, photo.

CUMMINGS-FUNERAL SERVICES _ A wake and funeral for U.S. Rep. Elijah Cummings will be held next week at the church where he worshipped for nearly four decades. SENT: 135 words, photo.

HONG KONG-PROTESTS _ Hong Kong protesters again flooded streets, ignoring a police ban on the rally and setting up barricades amid tear gas and firebombs. Protest leaders carried a black banner at the front of the procession with a slogan, "Five main demands, not one less," as they pressed their calls for accountability and political rights. By Kelvin Chan. SENT: 480 words, photos.

INDONESIA-WIDODO INAUGURATION _ Indonesia's popular president, who rose from poverty and pledged to champion democracy, fight entrenched corruption and modernize the world's most populous Muslim-majority nation, is to be sworn in for his second and final five-year term with a pledge to take bolder actions. SENT: 700 words, photos.

CHILE-PROTESTS _ Chilean President Sebastián Piñera announces the suspension of a subway fare hike that had prompted violent student protests, less than a day after he declared a state of emergency amid rioting and commuter chaos in the capital. SENT: 710 words, photos.

BOLIVIA-ELECTIONS _ South America's longest-serving leader is seeking an unprecedented fourth term in Bolivian elections, but polls suggest Evo Morales is in the tightest race of his career. The 59-year-old leftist is favored to win the first round vote, but he's likely to be forced into a December runoff where he could be vulnerable to a united opposition. SENT: 580 words, photos.

BOTSWANA-ELECTION _ Botswana's ruling party faces the tightest election of its history on Wednesday after former President Ian Khama, annoyed with his hand-picked successor, announced his support for the opposition, shaking up one of Africa's most stable countries. SENT: 500 words, photos.

TRUMP-PERRY _ Energy Secretary Rick Perry has followed a policy that gave him the best chance to survive in the Trump administration. Do your job and keep a low profile. Until now. Perry's announcement that he's quitting by year's end comes as the House impeachment inquiry highlights his work in Ukraine. By Ellen Knickmeyer and Matthew Daly. SENT: 1,120 words, photos.

ELECTION 2020-SANDERS _ Storming past questions about his health, Bernie Sanders vows that he's "more ready than ever" to fight for a political revolution — with a little help from new friends — at a rally that drew thousands to a New York City park. The rally offered a pointed reminder to skeptics in both political parties that the 78-year-old democratic socialist is still very much a force in the 2020 presidential race. By National Political Writer Steve Peoples. SENT: 680 words, photos.

FACT CHECK-WEEK _ As President Trump describes it, the U.S. swooped into an intractable situation in the Middle East, achieved an agreement within hours that had eluded the world for years and delivered a “great day for civilization.” It was a mission-accomplished moment that other Republican leaders, Democrats and much of the world found unconvincing. A look at his rhetoric on that and other topics over the past week as well as a sampling of statements from the latest Democratic presidential debate. By Calvin Woodward, Hope Yen and Lolita C. Baldor. SENT: 2,520 words, photos. Find AP Fact Checks at https://apne.ws/2kbx8bd

CHICAGO-SCHOOLS-STRIKE _ Chicago parents leaned on family, friends and community groups as 25,000 teachers in the nation's third-largest school district went on strike this past week, canceling classes for more than 300,000 kids. SENT: 870 words, photos.

HOTEL COLLAPSE _ After two days of delays, New Orleans officials are hoping to use a series of controlled explosions to take down two cranes that have been leaning precariously over the remains of a partially collapsed hotel. SENT: 590 words, photos.

WORLD SERIES LOOKAHEAD _ The Houston Astros and Washington Nationals will meet in a World Series that will put the focus on dominant rotations. Gerrit Cole is lined up to start the opener Tuesday night at Minute Maid Park, with Justin Verlander and Zack Greinke set to follow as Houston tries to win its second championship in three years. By Baseball Writer Ben Walker. SENT: 750 words, photos.

As Hong Kongers seek to emigrate, some simply can’t lea ...