Tom Wilson broke a tie with 8:13 left and the Washington Capitals rebounded after blowing a two-goal lead to beat the Chicago Blackhawks 5-3 on Sunday for their third straight win.

Wilson beat Corey Crawford from the right edge of the crease with his third goal after he was left open and took a cross-ice pass from Carl Hagelin to put Washington ahead 4-3. Lars Eller added an empty-netter from his own zone with 49.3 seconds remaining.

T.J. Oshie, Nic Dowd and Alex Ovechkin also scored for the Capitals, who got 41 saves from Braden Holtby. Hagelin had two assists. 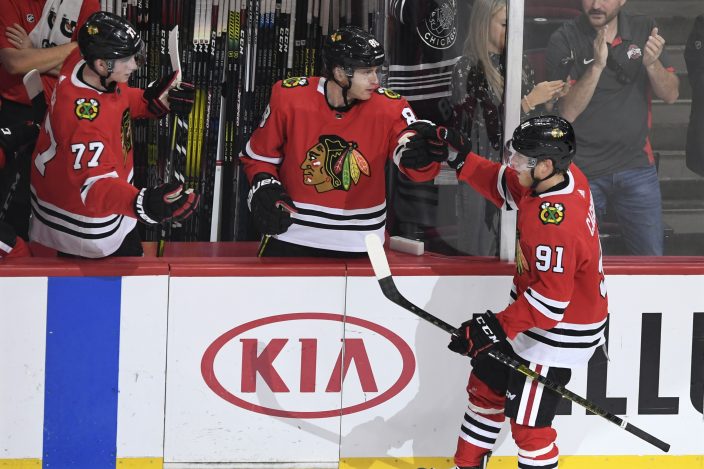 Chicago Blackhawks' Drake Caggiula (91) celebrates with teammates Patrick Kane (88) and Kirby Dach (77) on the bench after scoring a goal during the second period of an NHL hockey game against the Washington Capitals, Sunday, Oct. 20, 2019, in Chicago. (AP PhotoPaul Beaty)

Drake Caggiula, Dominik Kubalik and Patrick Kane connected for the Blackhawks, who rallied to tie it at 3 midway through the third. Alexander Nylander had two assists and Corey Crawford blocked 25 shots as Chicago's two-game winning streak ended.

Kirby Dach, the third-overall draft pick in the 2019 draft, made his NHL debut for Chicago. The 18-year-old started centering a line with Kane and Dylan Strome. 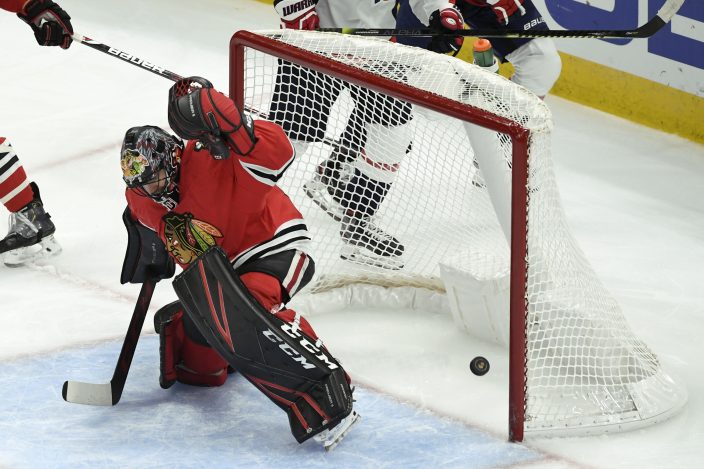 Oshie opened the scoring with his team-leading seventh goal, on a power play at 9:25 of the first and just eight seconds after Andrew Shaw was penalized for holding.

Following a faceoff in the Chicago zone, Evgeny Kuznetsov stole the puck from Duncan Keith along the back boards and fed it to Oshie, who was storming to the net. Oshie ripped in a 15-foot shot past Crawford before the goalie could react.

Chicago dominated later in the first, but Holtby was able to turn aside several prime chances. The Blackhawks kept up the pressure until Caggiula tied it 1-all at 8:15 of the second on their 26th shot. 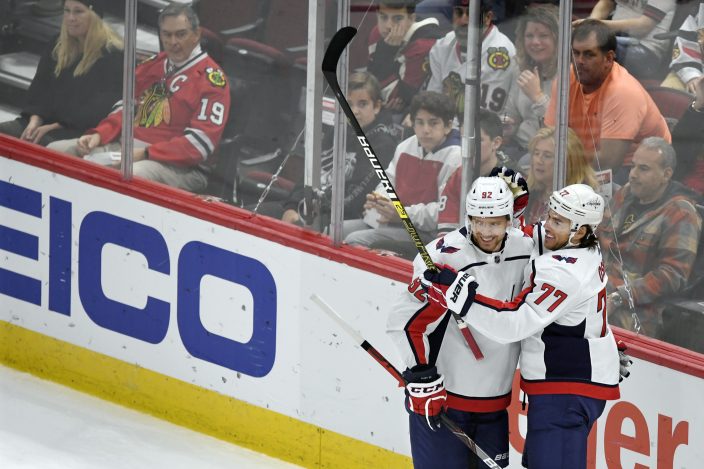 Washington Capitals' T.J. Oshie (77) celebrates with teammate Evgeny Kuznetsov (92), of Russia, after scoring a goal during the first period of an NHL hockey game against the Chicago Blackhawks, Sunday, Oct. 20, 2019, in Chicago. (AP PhotoPaul Beaty)

Holtby stopped Ryan Carpenter from the slot, but the rebound popped to the left of the net. Alexander Nylander corralled the loose puck and made a nifty behind-the-back pass to Caggiula, who was open the right edge of the crease.

Washington's Chandler Stephenson was slapped with a double-minor for high-sticking and cutting Dach near the mouth at 9:25 of the second. Dowd scored a short-handed goal 28 seconds into the first penalty to give the Capitals a 2-1 lead and short circuit Chicago's momentum.

After Kane lost the puck, Carl Hagelin carried it down the left wing on a 2-on-1 break with Dowd. He dished it to Dowd who fired a high one-timer past Crawford.

Chicago managed only two shots during the four-minute power play.

Ovechkin made it 3-1 at 3:52 of the third when he beat Crawford from the left circle with a one-timer after taking Carlson's cross-ice pass.

Kubalik cut it to 3-2 just 2:13 later. After Holtby stopped Brandon Saad's point-blank backhander, Kubalik buried the rebound from the edge of the crease.

Kane tied it 3 at 9:58, fooling Holtby from the right circle. After carrying the puck down the wing, Kane hesitated for a second, then fired a shot between Holtby's pads.

NOTES: Dach was the youngest player (18 years, 272 days) to make his debut with the Blackhawks since Kane (18 years, 319 days) in 2007. Dach suffered a concussion in the Traverse City (Michigan) prospects tournament in September and eventually was sent to Rockford of the AHL for a three-game conditioning stint before being recalled on Friday. ... Washington F Richard Panik (left shoulder) missed his second game after being injured in a collision with teammate and D Jonas Siegenthaler. Panik is on long-term injured reserve.

Capitals: At Calgary on Tuesday for the second game of a five-game road trip.

The coronavirus crisis has hit Wes ...

Jimmy Butler was an easy get for NBA Finals-bound Heat