The Latest on the tornado that touched down in Dallas (all times local):

Dallas Fire-Rescue says there have been no reports of fatalities or serious injuries in the aftermath of a Sunday night tornado, but three people were hospitalized for evaluation of non-life-threatening injuries. 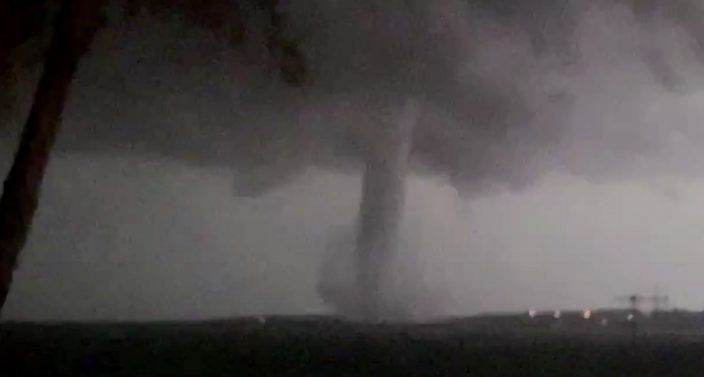 This Oct. 20, 2019 image made from video by Twitter user @AthenaRising shows the tornado in Rockwall, TX. The National Weather Service confirmed a tornado touched down in Dallas on Sunday night, causing structural damage and knocking out electricity to thousands. (@AthenaRising via AP)

Spokesman Jason Evans says search teams conducted primary assessments on accessible structures for six hours overnight, but their efforts were "hampered by limited access and lack of proper lighting." A second set of teams will resume search efforts in daylight.

Evans says the damage within Dallas is limited to an area bordered by Royal Lane to the north and Northwest Highway to the south, as well as Harry Hines Boulevard to the west and Interstate 75 to the east — essentially, northwest Dallas.

He says personnel initially responded to calls including "everything from power lines down, to fallen trees to people being injured inside of their homes by broken glass." Fire-Rescue's own Station 41 was left "uninhabitable" when high winds stripped the roof and other parts, but no firefighters were injured.

An electric utility says storms across Texas have caused significant damage to power lines, leaving more than 150,000 customers without power in East Texas.

Oncor said early Monday that there's no estimated time of restoration. The utility says the damage to power lines took place east of Interstate 35, an area that includes Dallas.

The National Weather Service confirmed a tornado touched down in Dallas late Sunday night near Love Field Airport. The NWS says a line of strong storms was moving through the Dallas-Fort Worth area early Monday.

The city of Dallas says it hasn't received reports of fatalities or serious injuries after a tornado touched down Sunday, but it's assessing the damage.

According to Oncor, nearly 112,000 customers are affected by power outages. Six Dallas Independent School District campuses have canceled class on Monday, as has The Episcopal School of Dallas.

The city says in a release that there are reports of gas leaks north of Walnut Hill. Approximately 35 traffic signals aren't communicating.

The city of Dallas is preparing to open a shelter by 2 a.m.

Dallas Fire-Rescue spokesman Jason Evans says in a release that the department is responding to a structural collapse, from which seven people made it out safely. He says the department has responded to multiple calls form people injured in their homes by broken glass.

The National Weather Service has confirmed that a tornado touched down in Dallas.

Meteorologist Jason Godwin says radar confirmed that the twister touched down Sunday night near Love Field Airport before moving northeast through the city.

Godwin says the size and severity of the tornado won't be known until crews arrive to survey the damage. More stormy weather is expected in the area overnight.

WFAA reports a convenience store collapsed in the storm, but the clerk tells the station everyone who was inside made it out safely.

The National Weather Service says a possible tornado has moved through the Dallas area, causing some structural damage and downed power lines.

The weather service says the suspected twister moved through the city's north side on Sunday night. Local media outlets report several structures have been damaged, trailers flipped and tree limbs scattered across roadways. Oncor's website indicates more than 75,000 customers are without power.

Dallas police say officers in one part of the city were going door-to-door to check on residents.

There were no immediate reports of injuries.