The prime minister of Montenegro, a small Balkan nation that is the next in line to join the European Union, has expressed hope that once Brexit is finalized, the EU's enlargement policy would regain importance.

Dusko Markovic told The Associated Press that once the issue of Britain's departure from the bloc is wrapped up it would "free the EU from a major problem" and herald "new opportunities for candidate countries" such as Montenegro.

The Adriatic nation of 600,000 is seeking EU membership after joining NATO in 2017 amid strong opposition from Russia. 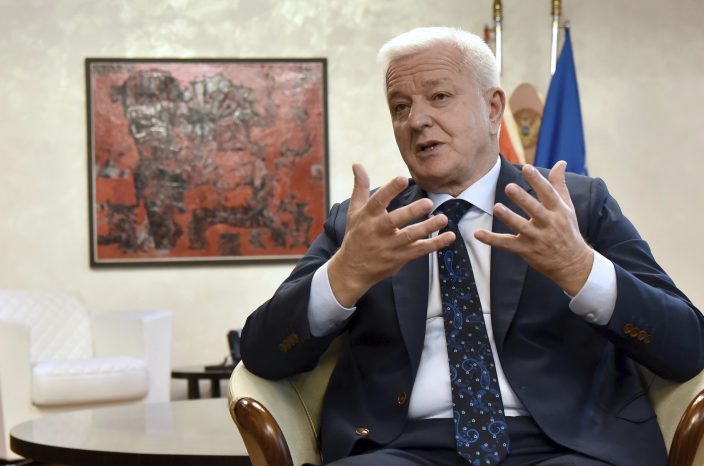 Montenegro's Prime Minister Dusko Markovic speaks during an interview with The Associated Press in Montenegro's capital Podgorica, Friday, Oct. 18, 2019. Markovic said that once Britain's Brexit split with Europe is all wrapped up, it would herald ''new opportunities for candidate countries'' to join the bloc, such as Montenegro, the Adriatic nation of some 600,000 people which is seeking EU membership. (AP PhotoRisto Bozovic)

"This (Brexit) is one of the difficult open questions the EU has faced in recent years," Markovic told the AP on Friday. "The agreement on Great Britain's exit from the EU should not have a negative impact on the dynamics of Montenegro's negotiations with the EU, but hopefully be a positive stimulus for it."

If approved in the British and EU parliaments, the deal would be "a great relief for both the EU and Great Britain," added Markovic. "Enlargement policy will gain in importance because of what the new European Commission announced as a policy toward the Western Balkans."

But Markovic warned that the EU decision last week not to open membership negotiations with North Macedonia and Albania sends a negative message to the volatile Balkan region where Russia has stepped up efforts to regain historic influence and China has moved in with investment.

French President Emmanuel Macron has refused to allow any new countries into the 28-nation bloc until its enlargement procedures have been reformed, while the Netherlands opposes Albania's candidacy and disputes the commission's assessment.

The decision was seen as a setback for the region where EU membership prospect has been a strong source of encouragement for reform and reconciliation after the war that followed the breakup of the former Yugoslavia in the 1990s.

"Indeed, the refusal of the EU to open negotiations with Albania and Macedonia is a bad signal and a bad message for the Western Balkans as a whole, and at the same time it is not a good position for the EU either," Markovic said. "There is no complete, united and secure EU without the Western Balkans."

Two Russian military secret service agents have been convicted in Montenegro of orchestrating a failed coup in 2016 that was designed to overthrow the pro-Western government and halt the country's NATO accession. Russia also has been helping neighboring Serbia beef up its army, fueling concerns in the West of renewed Balkan tensions.