Brazil's vice president says more troops will be dispatched to help contain the oil spill that has been polluting the nation's northeastern coast.

Hamilton Mourão said Monday that the origin of the leak remains unknown and that about 400 tons of crude have been retrieved.

The sludge began appearing at the start of September and has now washed up on at least 200 beaches in nine Brazilian states. 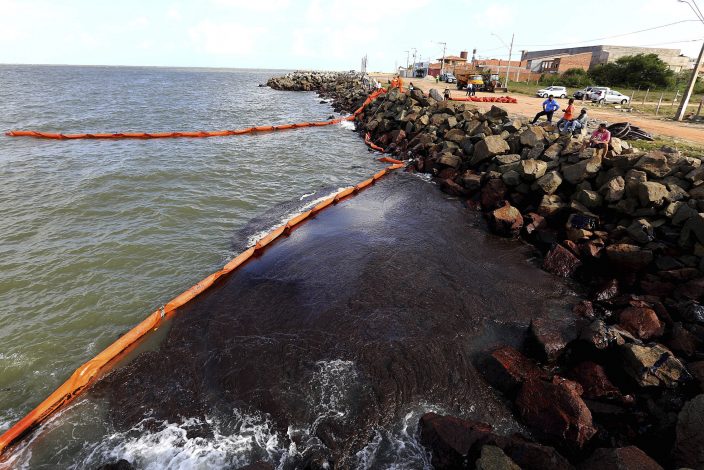 This Oct. 4, 2019 handout photo released by the Aracaju Municipal Press Office, shows rocks stained by an oil spill, on Artistas Beach, in Aracaju, Brazil. The oil that has been polluting Brazil's northeastern beaches since early September is likely coming from Venezuela, according to a report by Brazil's state oil company cited by the country's environment minister. (Andre MoreiraAracaju Municipal Press Office via AP)

Oceanographers and environmental groups have been criticizing what they call the government's slow and ineffective response, as many Brazilians had taken to cleaning up beaches themselves.

Brazil's public prosecutor's office also requested that the government be forced to activate its national plan to minimize environmental damage.

The government says all necessary means were adopted for the crude's collection.

US warns Iraq of Baghdad embassy closure if attacks con ...

The Trump administration has warne ...