The NBA season starts Tuesday night, and here are 10 storylines to follow for the 2019-20 campaign:

Golden State's Stephen Curry is about to become No. 2 on the league's all-time 3-pointers made list. 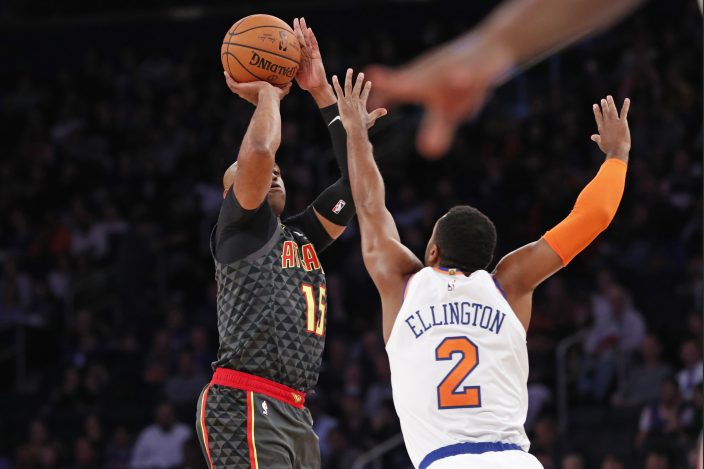 Curry enters this season with 2,483 made 3-pointers, leaving him 78 away from passing Reggie Miller for No. 2 on the list.

Houston's Russell Westbrook is one triple-double away from passing Magic Johnson on the NBA's all-time regular season list.

Westbrook has 138 triple-doubles, matching Johnson's total. Westbrook enters this year 43 away from the record of 181, held by Oscar Robertson.

Westbrook had eight triple-doubles in his first six seasons. He's had 130 in the five seasons since.

He's 1,101 points from passing Kobe Bryant for No. 3 on the all-time regular-season scoring list, is two games away from becoming the 40th player in league history with 1,200 appearances, and two starts from passing Bryant again for No. 10 on the career games-started list with 1,199.

He's also 522 field-goal tries away from 24,000, and will be the sixth player in league history to get there.

Vince Carter is about to become the first player in NBA history to appear in 22 seasons. And if he plays for Atlanta at Denver on Nov. 12 — or any game after that — he will become the fourth-oldest player to appear in an NBA regular-season game.

Among players with 2,000 field goals in NBA history, Brooklyn's DeAndre Jordan has the best shooting percentage of anyone — .670 entering this season, well ahead of second-place Artis Gilmore's .599.

To put that in perspective: If Jordan took 554 shots this season and missed every one of them, he'd still be ahead of Gilmore.

The NBA is going international for three games this season — two in Mexico City, the other in Paris.

The Mexico City matchups have Dallas playing Detroit on Dec. 12 and Phoenix playing San Antonio on Dec. 14. In Paris, it'll be Charlotte against Milwaukee on Jan. 24.

They'll be home games for Detroit, Phoenix and Charlotte.

Dallas will have a bit of a rarity: The Mavericks will play in three different countries in an 11-day span, starting with the game in Mexico, followed by four in the U.S. and then a trip to Toronto on Dec. 22.

J.J. Redick won a state championship in his senior year of high school. He went to the NCAA Tournament in all four of his college seasons at Duke.

Postseason basketball is an annual rite for Redick, a streak he's putting on the line this season with the New Orleans Pelicans. And Redick mentioned the streak to Pelicans rookie Zion Williamson, another former Duke player, in their first real conversation about the coming season.

Not only did teams take more shots last season than at any time in the last 35 years, they were connecting a pretty good clip as well.

Sacramento has gone 13 seasons without a playoff appearance, the longest such drought in franchise history — and tied for the second-longest in NBA history.

The Kings are one of only four franchises that currently have playoff droughts of longer than three seasons — the Knicks have missed nine in a row, and the Lakers and Knicks have both missed the last six postseasons.

For those who want to start planning, here are some key dates for the postseason and draft season next spring: Playoffs will start on April 18, the draft lottery in Chicago is on May 19, the draft combine in Chicago is May 21-24, the NBA Finals will begin on June 4 and Game 7 of the title series — if necessary — is on June 21.