The U.N. refugee agency is investigating why Malta last week allegedly asked the Libyan coast guard to intercept a migrant boat in a zone of the Mediterranean under Maltese responsibility, in possible violation of maritime law, a U.N. official said Tuesday.

Vincent Cochetel, the U.N. High Commissioner for Refugees' special envoy for the central Mediterranean, told reporters in Rome that "there's some evidence that Malta requested assistance (from) the Libyan coast guard to intervene" in its own search and rescue region on Oct. 18.

He said that "we are looking into the reasons of Malta's request," including that Malta may have asked Libya to intervene for technical reasons. 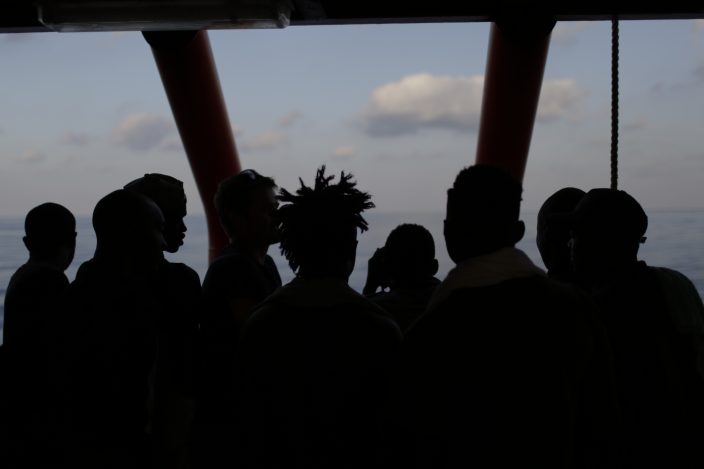 FILE - In this Sept. 13, 2019, file photo, rescued migrants are silhouetted as they look out at the horizon aboard the Ocean Viking, in the Mediterranean Sea. The U.N. refugee agency is investigating why Malta last week allegedly asked the Libyan coast guard to intercept a migrant boat in a zone of the Mediterranean under Maltese responsibility, in possible violation of maritime law, a U.N. official said Tuesday, Oct. 22, 2019. (AP PhotoRenata Brito, File)

"The problem is that the migrants were disembarked in Libya. That's certainly a violation of maritime laws ... It's clear that Libya isn't a safe port," he added.

The Oct. 18 interception was reported by Alarm Phone, an independent hotline for migrants in need of rescue at sea.

The group first received a call and GPS position from the boat carrying 50 migrants, including 10 women and five children, early that afternoon and informed Malta about the case, as it was in the country's search and rescue region.

"We will take care of everything" a Maltese officer on duty told an Alarm Phone activist at 2:40 p.m., according to a transcript of the call provided to the Associated Press by Alarm Phone.

But in the hours following the first contact, Malta's rescue and coordination center stopped answering calls from Alarm Phone, which attempted to follow up on the rescue. By 5 p.m. the boat reported it was leaking and later that a helicopter was flying over it.

The Libyan coast guard did not answer repeated requests from AP about the case. The Maltese government declined to comment about the case, which could also raise human rights issues.

According to international maritime law, people rescued at sea should be taken to the nearest port of safety. But migrants rescued by the Libyan coast guard are returned to the war-torn country and sent to EU-funded detention centers where many are victims of extortion, sexual abuse and human trafficking.

According to the UNHCR there are currently 650,000 migrants in Libya.

According to the transcript, Maltese authorities justified the interception saying that the Libyans "had (taken) the case earlier, outside the Maltese Search and Rescue region."

Ever since Libya registered a massive search-and-rescue area of the Mediterranean Sea last year, the European Union left the task of migrant rescues largely to the nation currently at war.

As a result, sea arrivals to Italy dropped dramatically from 21,426 from January 1 to October 9 of last year, to 7,939 in the same period this year.

The same did not happen in the tiny European archipelago nation of Malta, which continued being responsible for search-and-rescue in waters close to the Italian island of Lampedusa and north of Libya's search-and-rescue area. So far this year Malta has seen nearly 3,000 migrant arrivals by sea compared to 989 in the same period last year.

UNHCR's Cochetel said it was not the first time Malta was allegedly accused of delegating a rescue to the Libyan coast guard.

But he warned against seeing this as a new level of outsourcing of migrant rescues.

"We had some allegations that this had already happened in the past," he said, but added that there was "no evidence for now that this is becoming a common practice."