The region's avocado boom, fueled by soaring U.S. consumption, has raised parts of western Mexico out of poverty in just 10 years. But the scent of money has drawn gangs and hyper-violent cartels that have hung bodies from bridges and cowed police forces, and the rising violence is threatening the newfound prosperity. A recent U.S. warning that it could withdraw orchard inspectors sent a shiver through the $2.4 billion-a-year export industry.

Some growers are taking up arms. At the checkpoint in San Juan Parangaricutiro, the vigilantes are calm but attentive. They say their crop is worth fighting for. 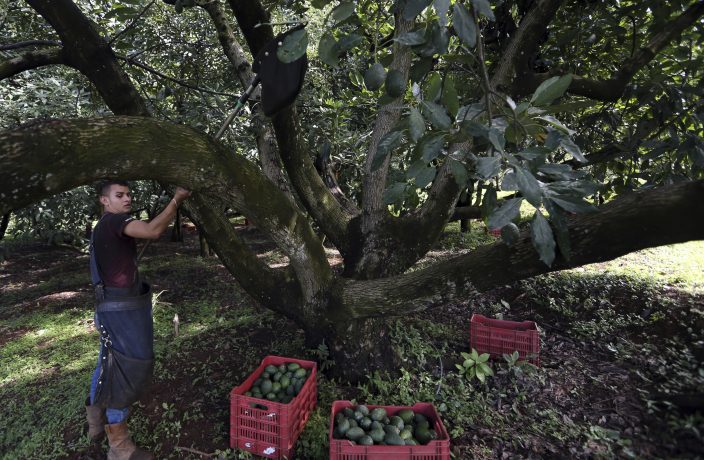 In this Oct. 1, 2019 photo, a farmhand harvests avocados at an orchard, near Ziracuaretiro, Michoacan state, Mexico. Avocado pickers earn an attractive wage for the region but the work is seasonal and so physically demanding that few can continue working beyond the age of 45. (AP PhotoMarco Ugarte)

"If it wasn't for avocados, I would have to leave to find work, maybe go to the United States or somewhere else," said one of guards, Pedro de la Guante, whose small avocado orchard earns him far more than he would get from any other legal — or illegal — crop.

Luis, another guard who asked that his last name not be used out of fear of reprisals, lists the problems that came to the town with the avocado boom: extortion, kidnappings, cartels and avocado theft. "That is why we are here: We don't want any of that."

While Mexican avocado growers have for years lived in fear of assaults and shakedowns, the situation went international in mid-August when a U.S. Department of Agriculture team of inspectors was "directly threatened" in Ziracuaretiro, a town just west of Uruapan in Michoacan. While the agency didn't specify what happened, local authorities say a gang robbed the truck the inspectors were traveling in at gunpoint. 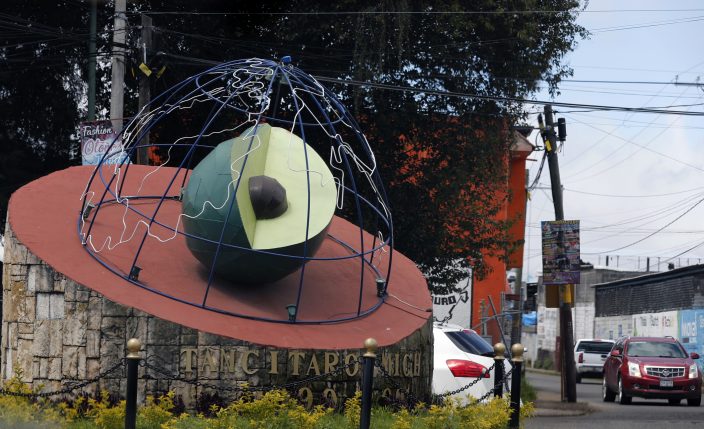 This Oct. 2, 2019 photo shows a sculpture of an avocado at the town's entrance in Ziracuaretiro, Michoacan state, Mexico. While Mexican avocado growers have for years lived in fear of assaults and shake downs, the situation went international in mid-August when a United States Department of Agriculture team of inspectors in Michoacan was "directly threatened" in Ziracuaretiro. (AP PhotoMarco Ugarte)

"For future situations that result in a security breach, or demonstrate an imminent physical threat to the well-being of APHIS personnel, we will immediately suspend program activities," the USDA wrote in a letter, referring to the Animal and Plant Health Inspection Service.

Such a move could block shipments and devastate the industry that supplies U.S. consumers hungry for guacamole and avocado toast. It was only in 1997 that the U.S. lifted a ban on Mexican avocados that had been in place since 1914 to prevent a range of weevils, scabs and pests from entering U.S. orchards.

The Michoacan-based Avocado Growers and Packers Association published the warning letter from the USDA — an unusual move that some in Uruapan interpreted as a gesture aimed at making criminals aware they risk killing off the state's biggest money-making industry if U.S. inspectors stop approving exports. Neither the avocado association nor the USDA responded to requests for comment. 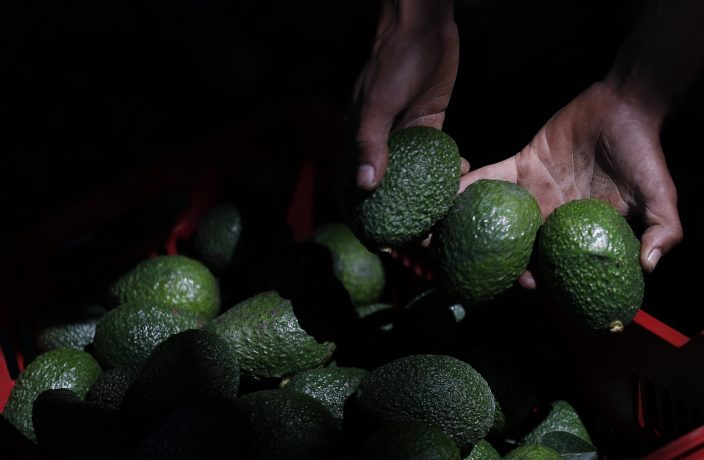 In this Oct. 1, 2019 photo, a worker shows a handful of avocados at an orchard near Ziracuaretiro, Michoacan state, Mexico. The avocado boom have lifted many in Michoacan out of poverty. (AP PhotoMarco Ugarte)

The police chief in a town in western Mexico's avocado belt describes what life is like living with the Viagras cartel. The chief asked that his name not be used. The Viagras are so thoroughly present that he doesn't venture into nearby Uruapan without a phalanx of armed bodyguards. The Michoacan-based cartel derives its unusual name from their founders' habit of combing so much gel into their hair that it stands up on end.

"They've done everything — extortions, protection payments. They've flown drones over us," said the chief. "They come in and want to set up (drug) laboratories in the orchards."

But the Viagras are now also the hunted. The vicious Jalisco New Generation cartel is trying to move into Michoacan on several fronts. In August, the cartel hung nine bodies from an overpass in Uruapan, and left 10 more corpses hacked up or dumped by the road. On the overpass they hung a banner saying: "Be a Patriot, Kill a Viagra." 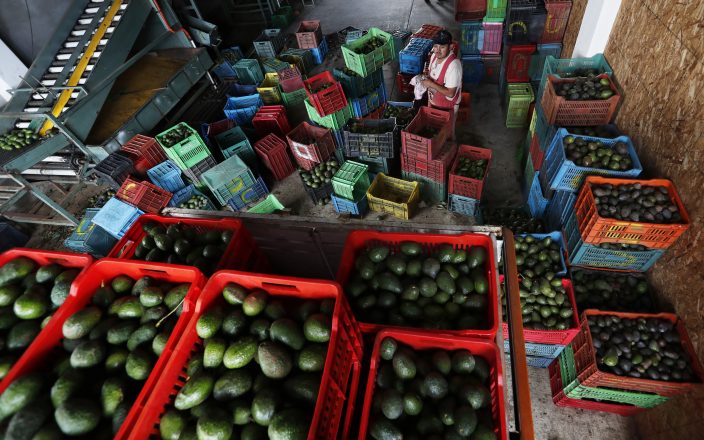 In this Oct. 2, 2019 photo, a worker wipes his hands while filling crates with avocados at a packing warehouse in Ziracuaretiro, Michoacan. The region’s avocado boom, fueled by soaring U.S. consumption, has drawn parts of western Mexico out of poverty in just 10 years. But the scent of money has drawn gangs and hyper-violent cartels. (AP PhotoMarco Ugarte)

Farther south, in the hotter, lime-growing region of Michoacan, Jalisco cartel gunmen ambushed and killed 13 state police officers in mid-October. The attack so terrified police that when they went to collect the dead officers' burned vehicles, they worked so hastily they left behind a crushed, charred, bullet-perforated skull.

Cartels, police and vigilantes alike are spooked by the Jalisco cartel onslaught.

In the cattle-ranching town of Tepalcatepec, which lies on the border with Jalisco state, heavily armed vigilantes — apparently in the employ of a local gang — mount a 24-hour guard in a sniper post atop a hill guarding against incursions by the Jalisco cartel. One vigilante with an assault rifle slung over his shoulder, who refused to give his name, came down from the hilltop to scare away a news photographer. "Clear out of here! Don't you know you have a .50-caliber (rifle) aimed at your head?" 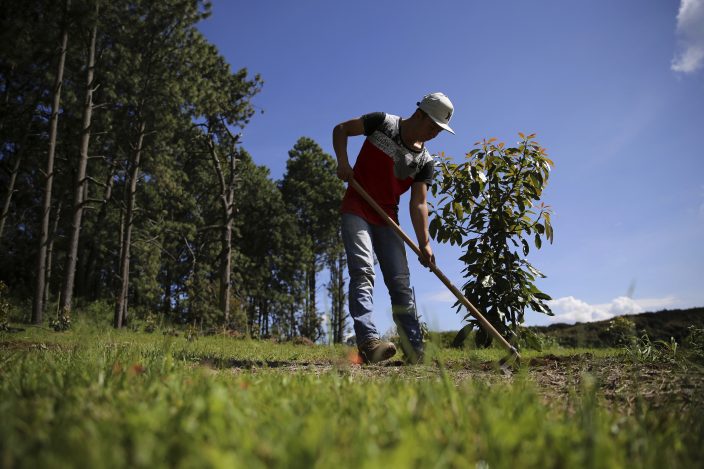 In this Oct. 2, 2019 photo, a farmhand tends to an avocado sapling at an orchard near San Juan Parangaricutiro, Michoacan state, Mexico. Because thieves often steal avocados from the orchards, most growers have had to put up chain-link fences and hire a guard. But it is the fear of kidnapping or the phone call demanding protection payments that is most feared. (AP PhotoMarco Ugarte)

As in much of Michoacan, the violence is largely hidden by a wave of apparent prosperity brought by fruit: miles of chain-link fencing enclose seemingly endless groves of avocado trees with limbs hanging heavy with the harvest. New packing plants seemingly go up overnight.

But Hipolito Mora, who founded the state's civilian armed self-defense movement in 2013, said appearances are deceptive. The new fruit packing plants had already been robbed at gunpoint three times in one week by thieves who apparently knew exactly when they would have cash on hand to pay farmers.

"If the business owners were to close their plants, the region's economy would come crashing down," said Mora, who is also a lime grower. 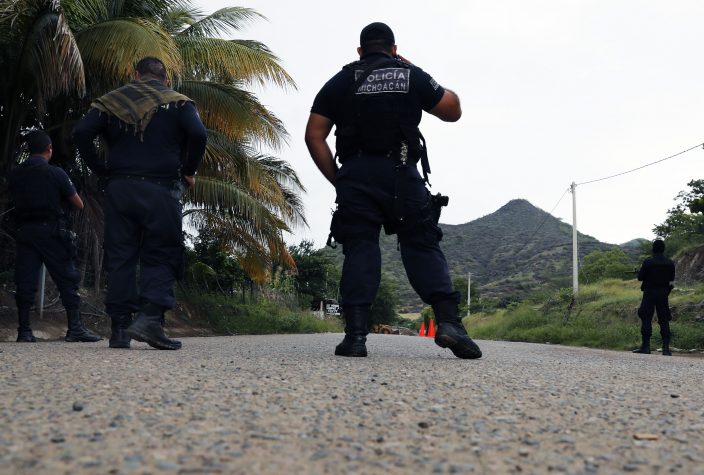 Mexico supplies about 43% of world avocado exports, almost all from Michoacan. The USDA has a near-permanent delegation of inspectors posted in Mexico.

A few weeks after the incident with the USDA inspectors, an avocado orchard manager and a worker were kidnapped at gunpoint in Ziracuaretiro, allegedly by municipal police. Seven officers are under investigation in the case, and the Ziracuaretiro police department was essentially disbanded. 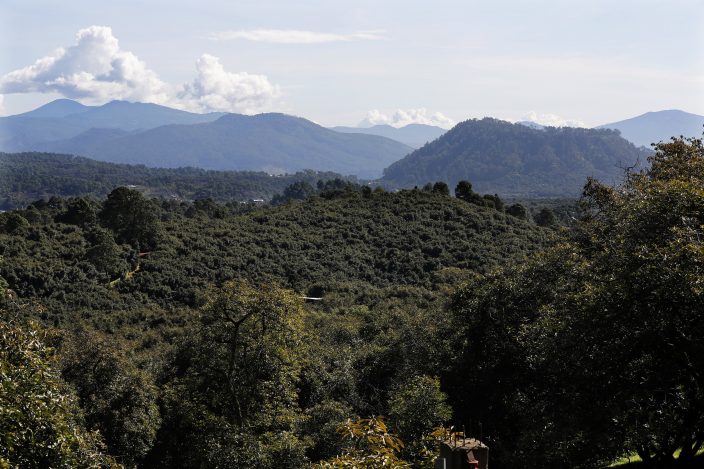 "This has everyone worried," Rodriguez Baca said of the U.S. warning and violence in his town. "If they close the door on us in the United States, everything would come crashing down."

His township shows the shortcomings of state and federal anti-crime strategies, in which police, the army and National Guard often come into troubled towns, make a show of force for a few weeks and then leave. State police had been assigned to patrol Ziracuaretiro earlier this year, before the U.S. inspectors were assaulted, but were withdrawn in July to attend another hotspot.

Avocado growers are feeling scared, alone and caught in the middle. 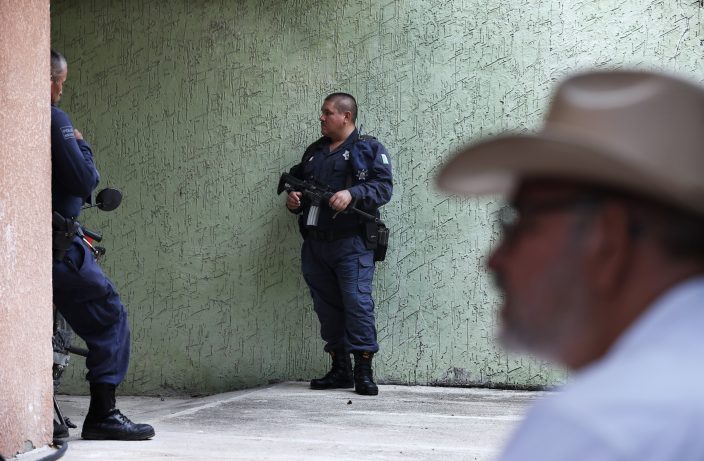 In this Oct. 3, 2019 photo, Hipolito Mora, founder of the state's civilian armed self-defense movement, speaks during an interview at his home in Ruana, Michoacan state, Mexico, with the continued presence of armed men to keep him safe. (AP PhotoMarco Ugarte)

Carlos Martínez is a third-generation avocado grower whose 2.5-hectare (6-acre) grove in Ziracuaretiro can produce as much as 50 tons of avocados in a good year, worth about $100,000.

"It is a question of crime and that affects us as third parties, and our customers," Martínez said. "We just wake up each morning hoping it doesn't happen to us."

Martínez hasn't had any shipments of avocados stolen yet — a common complaint in Michoacan — but he said thieves often steal avocados from the orchards. He, like most growers, had to put up chain-link fences and hire a guard. But it is the fear of kidnapping or the phone call demanding protection payments that worry him most. 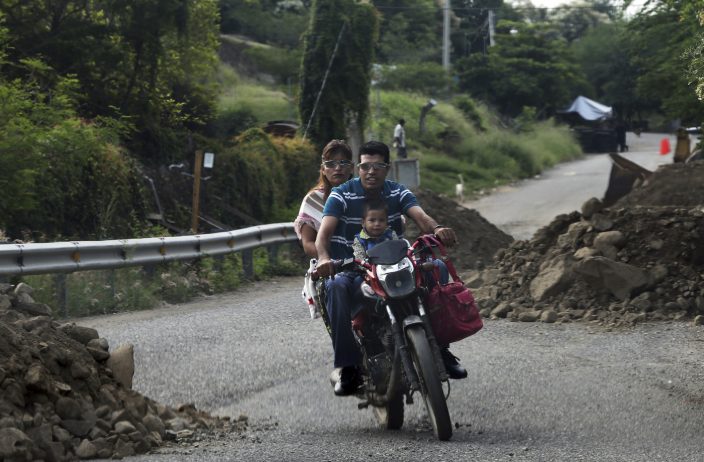 In this Oct. 3, 2019 photo, a family on a motorcycle courses between mounds of dirt and rocks on the outskirts of Tepalcatepec, Michoacan state, Mexico. The region's avocado boom, fueled by soaring U.S. consumption, has drawn parts of western Mexico out of poverty in just 10 years. (AP PhotoMarco Ugarte)

In San Juan Parangaricutiro, De la Guante is an example of how avocados have lifted many in Michoacán out of poverty.

He was an itinerant farmworker before he planted avocados on a hectare (2.4 acres) of sandy land 11 years ago. That relatively small plot now yields as much as 10 tons of avocados. This year he was lucky to sell in August, when prices were high, at 40 pesos ($2) a kilogram. That means De la Guante earned at least $15,000 this year. 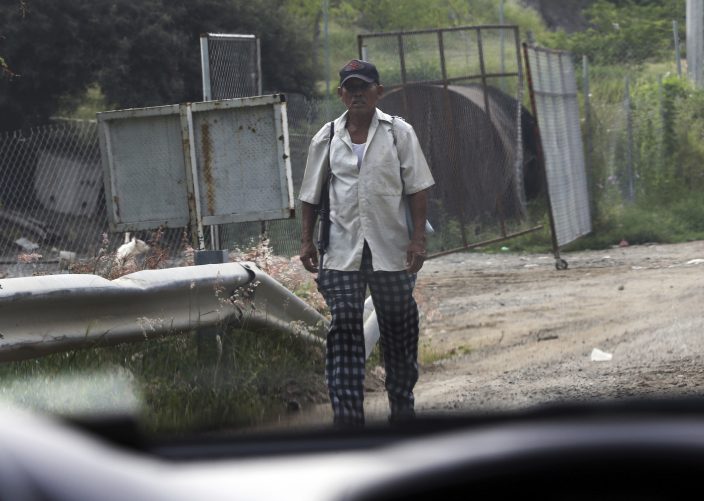 In this Oct. 3, 2019 photo, a vigilante walks down from a sniper post where he guards against thieves and drug cartel extortionists, on the outskirts of Tepalcatepec, in Mexico's state of Michoacan, the heartland of world production of the fruit locals call "green gold." (AP PhotoMarco Ugarte)

Adriana Villicaña, a professor at Univa Catholic University in Uruapan, said the avocado boom has lifted thousands out of poverty.

"There are a lot of women working at packing plants, and a majority of them describe themselves as single mothers or single," Villicaña said.

However, the rising tide hasn't lifted all boats. The region's 15,000 or so avocado pickers earn an attractive wage for the region, but the job is seasonal and the physical demands of climbing trees with long poles to get the avocados mean few can work beyond age 45. 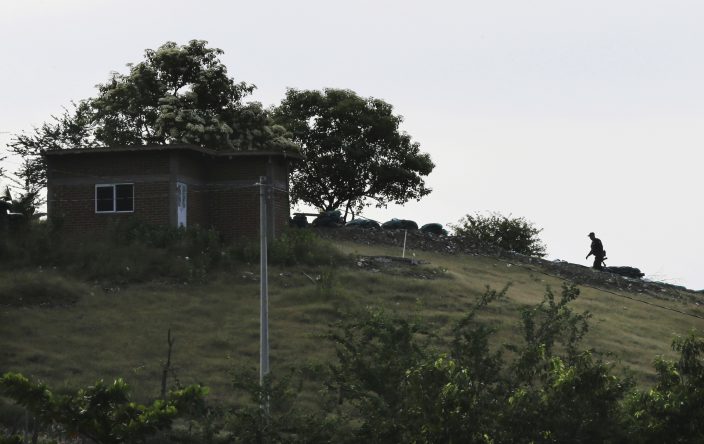 In this Oct. 3, 2019 photo, a heavily-armed vigilante is silhouetted against the horizon at a sniper post atop a hill against incursions by the Jalisco cartel, on the outskirts of Tepalcatepec, Michoacan state, Mexico. The region's avocado boom, fueled by soaring U.S. consumption, has drawn parts of western Mexico out of poverty in just 10 years. But the scent of money has drawn gangs and hyper-violent cartels. (AP PhotoMarco Ugarte)

Villicaña, who also sits on the Uruapan citizen's safety advisory board, says the region's crime problem will be worse if the avocado industry collapses.

"If there were no avocados, where are they going to work?" Villicaña asked. "The most likely things is that they would hire themselves out to work for the criminals." 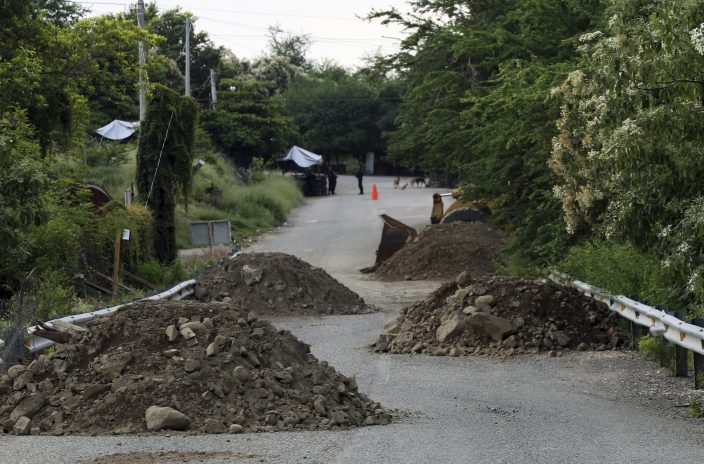 This Oct. 3, 2019 photo shows mounds of dirt and rock placed their by vigilantes in a zig-zag pattern on the highway leading in from Jalisco, on the outskirts of Tepalcatepec, Michoacan state, Mexico. Some small-scale avocado growers are taking up arms to guard against thieves and drug cartel extortionists, while others have piled mounds of dirt and rock on highways leading into their communities to slow down incoming vehicles and make them vulnerable to gunfire. (AP PhotoMarco Ugarte)

More than a week of torrential rai ...