Kenneth Roberson's lyrics chronicled the gang violence he saw in his hometown of Houston.

"Momma's crying, son is dying on this crime scene," he rapped. Those words became prophetic as the aspiring artist was killed during a September 2018 drive-by shooting that left his mother, Yvonne Ferguson-Smith, heartbroken.

"I don't know how to move on," said Ferguson-Smith, who has started a nonprofit group called TEARS to help grieving mothers. "It's like he was speaking (in his songs) on his own death." 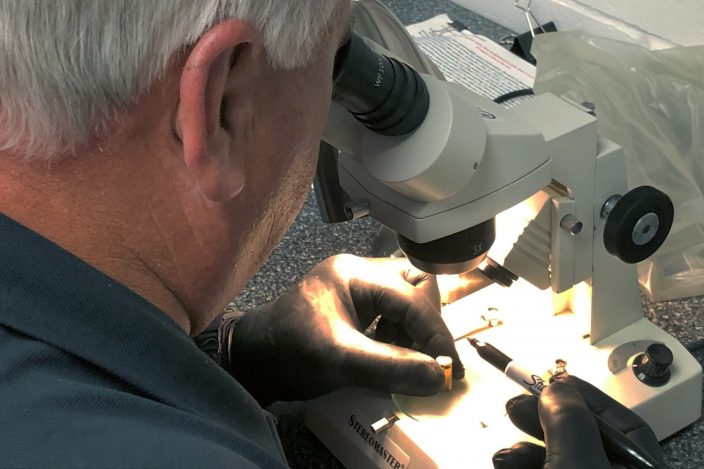 In this Monday, July 1, 2019 photo Fort Bend County Sheriff's Office crime scene investigator Dominic Sodolak examines a bullet casing in his Richmond, Texas office, from ammunition that was test fired from a handgun confiscated during a drug arrest. Sodolak later placed the casing in a computer station so that images of the casing could be uploaded to a federal ballistics database. (AP PhotoJuan Lozano)

Roberson's killing, which had no witnesses, might have gone unsolved if not for a federal ballistics database that linked the 24-year-old's death to a series of fatal shootings that seem unconnected but that authorities say are part of an ongoing gang war in Houston that's claimed more than 60 lives the past six years.

The National Integrated Ballistic Information Network, or NIBIN, is a database of scanned bullet casings that has been around for two decades but in recent years has evolved from a purely forensic tool to one that generates leads for investigators. While it has been successful in cities like Houston, the network still faces challenges, including questions about the accuracy of the science behind it and whether it's being fully utilized by local agencies. 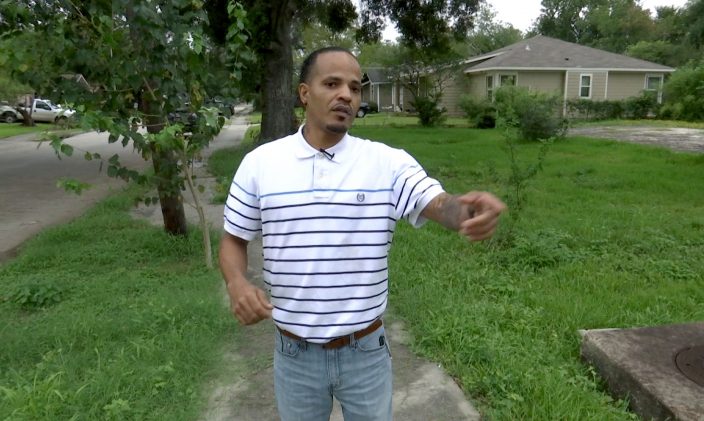 In this June 17, 2019 image from video, Levi Byrd shows where he dove off his horse in November 2016 as drive-by shooters aimed and fired at him, ultimately killing his pet in southeast Houston. Investigators later found the trigger man through the help of a federal ballistics database. (AP Photo John L. Mone)

"NIBIN is how many of the (Houston) shootings were connected. Once it was brought to me, it was pretty clear this is a gang war," Ogg said.

Authorities say the shootings are part of a battle between two gangs: the 100 Percent Third Ward or 103, and the Young Scott Block, or YSB. The conflict has claimed the lives of gang members and others, including an 8-year-old boy.

Bullet casings recovered at crime scenes or test-fired from confiscated weapons are scanned at computer stations and images are uploaded to the database, managed by the Bureau of Alcohol, Tobacco, Firearms and Explosives, or ATF. The database looks for possible matches with other bullet casings that have similar marks indicating they were fired from the same weapon. 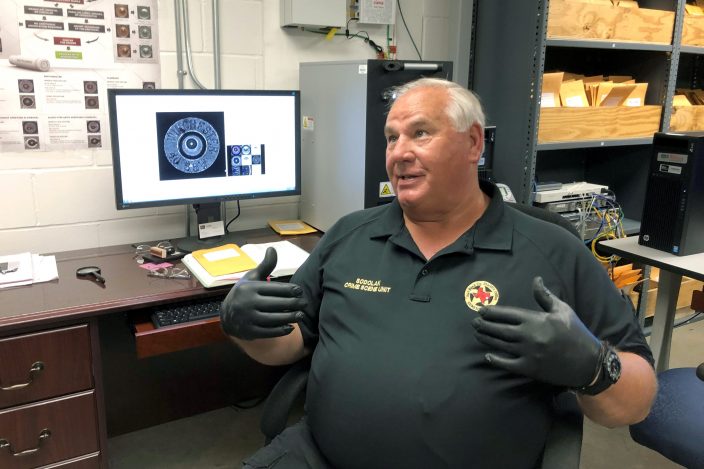 In this Monday, July 1, 2019 photo, Fort Bend County Sheriff's Office crime scene investigator Dominic Sodolak discusses a federal ballistics database his agency uses to help it generate leads in unsolved shootings, in his Richmond, Texas office. “Finding a casing for us, I look at it as better than finding a fingerprint,” said Sodolak. (AP PhotoJuan Lozano)

Authorities can use potential matches to pursue leads from other cases not previously known to them. These leads can be investigated much more quickly than confirmed hits — information that must be verified by a firearms examiner and can take longer to complete.

"It takes cases that otherwise have gone unsolved ... and it breathes new life into them," said Fred Milanowski, special agent in charge of the ATF's Houston office.

Authorities say the database helped Houston police connect casings from Roberson's shooting, along with casings from two fatal shootings in November 2018, to one individual who remains jailed and is a suspect in four other killings. 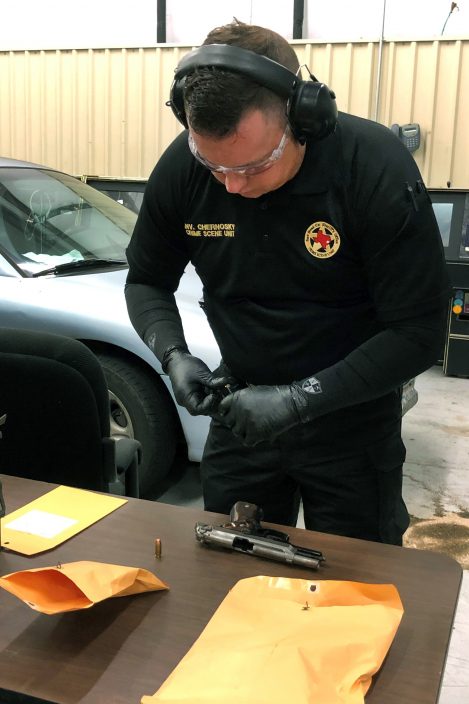 In this Monday, July 1, 2019 photo, Fort Bend County Sheriff's Office crime scene investigator David Chernosky prepares to test fire a handgun in Richmond, Texas, seized during a drug arrest so that another investigator can take the bullet casings and scan images of the casings and then upload them to a federal ballistics database. (AP PhotoJuan Lozano)

Police say Roberson appeared to have been affiliated with the YSB gang. Ferguson-Smith said she doesn't believe her son was in a gang, but that he knew gang members and might have been killed because of that.

Ogg said gang-related cases can be difficult to prosecute because witness testimony can be an issue. She said some witnesses may have their credibility questioned because of their gang affiliations, while others might be afraid to testify for fear of retaliation.

NIBIN has helped Houston authorities make arrests in other crimes as well.

Levi Byrd said he was riding his horse, Freedom, in November 2016 through a partly rural neighborhood in south Houston when someone in a truck shot five times at him and his horse. Freedom was hit twice, dying instantly.

A 9 mm handgun seized two months later at a drug house was matched with shell casings found next to Freedom. A suspect was arrested and sentenced to 22 years in prison.

"Freedom was family," Byrd said. "For them to catch the killer, I felt justice was served."

In fiscal year 2019, NIBIN helped solve 68 shootings and lead to 36 arrests in the Houston area, while also resulting in 122 solved shootings and 95 arrests in San Antonio, according to the ATF.

The agency said that since March 2018, the database has played a critical role in an arrest or prosecution in 754 cases nationwide.

There are 215 NIBIN sites in 42 states around the country that have worked with more than 5,700 law enforcement agencies.

A 2017 report by the Police Executive Research Forum highlighted ATF-led task forces in Chicago, Denver and Milwaukee that use NIBIN. It found that while those cities continue to face "serious challenges with gun violence," the task forces "are an innovative and promising approach for enhancing the investigation of gun crimes and identifying offenders."

Laurie Woods, a lecturer at Vanderbilt University in Nashville, Tennessee, and a former law enforcement officer, said the database should best be used as a generator of investigative leads, adding that while there can be a lot of commonalities between two bullet casings, "there's no absolute match."

Some studies in recent years have questioned the reliability of such firearms analysis or called for additional research into the subject.

A February report from the Department of Justice's Inspector General found budget and personnel shortages and lack of technical expertise might hinder the ability of law enforcement agencies to "effectively participate in the program."

For the Fort Bend County Sheriff's Office, which patrols parts of suburban Houston, NIBIN is worth the extra work it takes to scan bullet casings into the database while also responding to calls and processing other evidence.

"Finding a casing for us, I look at it as better than finding a fingerprint," said Dominic Sodolak, a crime scene investigator with the sheriff's office.