The English call them finishers. The Springboks called them the bomb squad.

"Replacements" is a more reserved description for the eight players each team picks to warm the bench at the start of each Rugby World Cup game. England's Australian coach Eddie Jones got quite adamant about the terminology when he was asked if he felt vindicated about dropping flyhalf George Ford from the starting lineup ahead of last Saturday's 40-16 quarterfinal win over the Wallabies.

Rugby is no longer all about the starting XV, and Jones tried spelling that out in numbers. 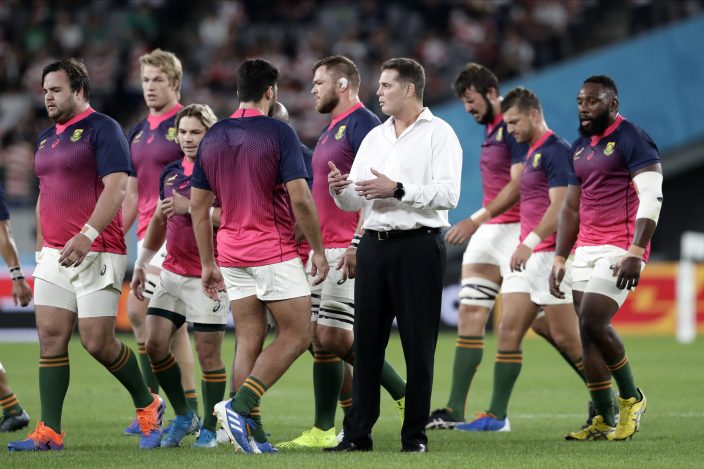 "Well, I didn't drop him mate. I changed his role. So, I know you guys struggle with that. But he changed his role, and he was brilliant," Jones, arms crossed, explained to a veteran rugby writer at a news conference. "Are we vindicated? We're happy that he played his role well."

He didn't leave it there, either, realizing he had a big audience ahead of a semifinal against New Zealand.

"Maybe you guys have got to start reporting differently," he told the assembled media. "Maybe you got to stop reporting like you did 30 years ago. Come into the modern rugby. Join us. Rugby has changed, it's a 23-man game. Join us." 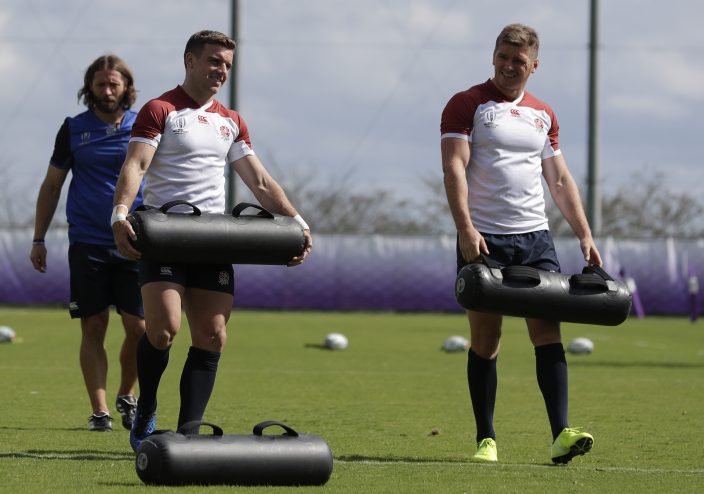 His response started with a scowl and ended with a smile, and a personal invitation to his inquisitor.

An hour had elapsed and the score was 27-16 before Ford went on against Australia, with skipper Owen Farrell and Manu Tuilagi shifting wider to create space in the No. 10 position and Henry Slade replaced. Jones made replacements in his front row and his second row another four minutes later, and sent on a further four pairs of fresh legs from the 69th to the 73rd minutes.

Australia coach Michael Cheika, at that stage chasing the game, made a tactical replacement at flyhalf in the 53rd minute, two further changes in the 60th and four more in the space of four minutes after that. 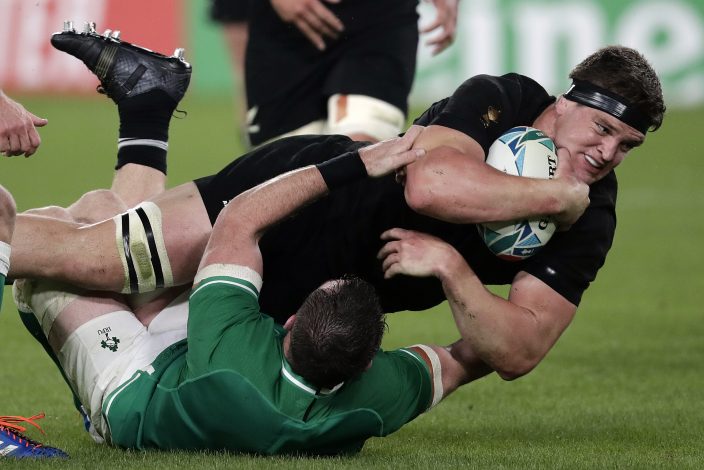 So Jones is by no means running solo when it comes to throwing on tactical replacements rather than wait until a player is injured to send in reserves. That's so old school.

South Africa coach Rassie Erasmus has one of the biggest starting packs in international rugby at his disposal, but still regularly stacks his bench with six more forwards.

Why shouldn't he play to South Africa's strength, he figures. Erasmus tends to run on a new front row if the starting props and hook are fatiguing, to ensure the scrum dominance maintains a strong set piece platform for the team. He explained earlier in the tournament how the terminology works when it comes to picking his match-day 23 from the 31-man World Cup squad.

"You get the starting players, those are 'The 15,'" he said. "Then you get the reserves ... we currently on this tour call them the bomb squad because they come in there (during a game) and they must fix it if it's not going well. They must come in and sort out the situation."

The eight players who don't make the cut, he said, are known as the "dirt trackers" because they're not on the grass on game day, but "they help you to prepare for the test match." 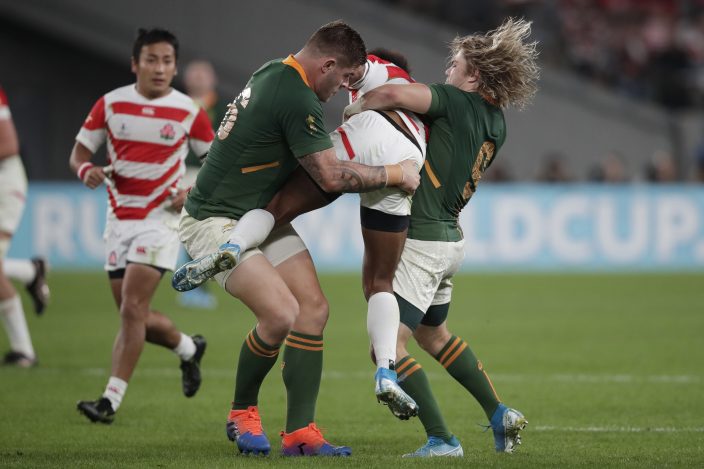 South Africa's assistant coach Matthew Proudfoot said the six forwards on the bench added some extra artillery, but the composition of the so-called bomb squad often depended a lot on the opposition.

"We look at specific roles for the replacements, and that has become a really important aspect of modern-day rugby," he said, looking ahead to Sunday's semifinal. "We will look at the challenge that Wales pose in the pack."

It's something all coaches are doing as the games becomes quicker, the players seemingly bigger and fitter and the impact of collisions more potentially damaging. 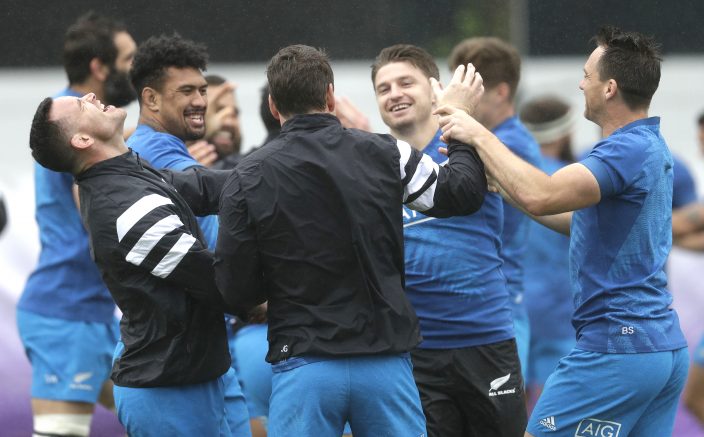 In previous eras, players could only be replaced if they were injured. That rule was relaxed to allow for tactical replacements, and the reserves bench kept expanding from four, to six, to eight as the requirements for specialist front-row positions.

Different coaches go for a different mix of replacements, depending on where they see the finishers helping most. Some replace a scrumhalf after an hour to add more energy and noise, or throw in a utility player to add some x-factor late.

All Blacks coach Steve Hansen sometimes does it just to try something different, even when things are going well. He's got the deepest squad at the tournament, so why not? 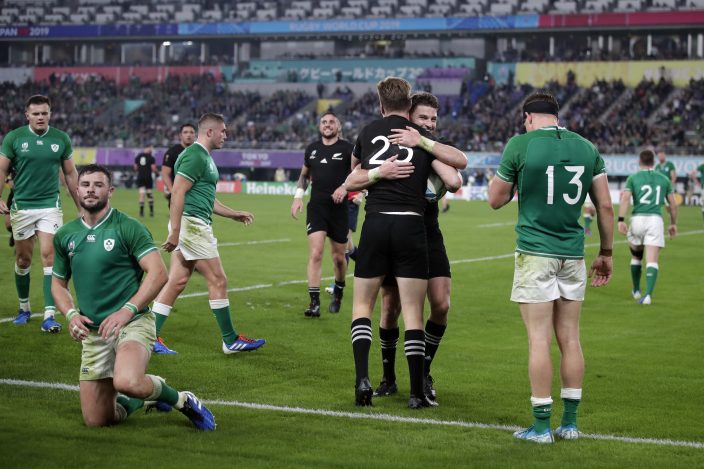 He took Sam Cane off at halftime during the quarterfinal win over Ireland to give Scott Barrett some game time.

"When you've got the bench we've got, the thought behind it is that we can add something different to the game and change the picture a bit," Hansen said. "We're happy with the way it went too."

Scott Barrett joined his brother Beauden on the field for the second half, and their other brother Jordie went on as a late replacement and scored a try.

Some players prefer to go on late, when their fresh energy can make a difference against a tiring opposition lineup.

There are benefits, too, according England prop Joe Marler, who has started and been a designated finisher during the World Cup. He's aiming for first win over New Zealand this weekend, and is coming off a big finish against Australia.

"I loved it. It was one of the best games I have been part of in terms of atmosphere and the squad unity and tightness," he said. "Great to play my part — and the pace had gone out of the game by then!"