Pope Francis asked forgiveness Friday from Amazonian bishops and tribal leaders after thieves stole indigenous statues from a Vatican-area church and tossed them into the Tiber River in a bold show of conservative opposition to history's first Latin American pope.

Speaking "as the bishop of Rome," Francis insisted that the carved wooden statues of naked pregnant women had been placed in a Vatican-area church "without any intention of idolatry," undercutting conservative claims that they were symbols of pagan, idolatrous worship.

Francis' apology came as his three-week synod on the Amazon wraps up Saturday when more than 180 bishops and cardinals from nine Amazonian countries vote on a final document synthesizing proposals to better protect the Amazon rainforest and minister to its indigenous peoples. 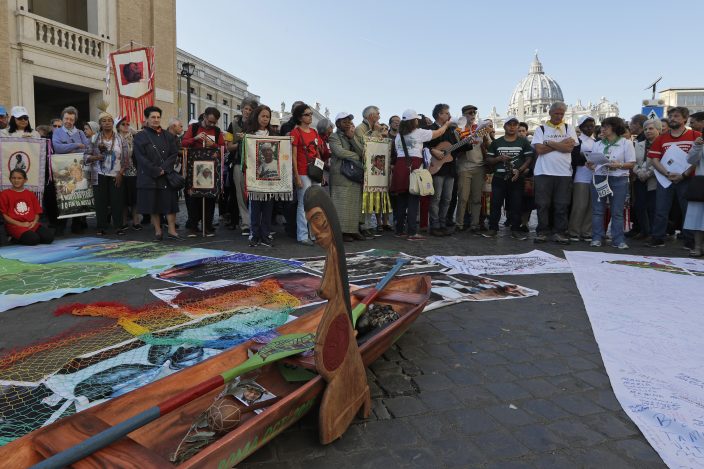 In this photo taken on Saturday, Oct. 19, 2019, members of Amazon indigenous populations prepare for a a Via Crucis (Way of the Cross) procession from St. Angelo Castle to the Vatican. In foreground is a wooden statue portraying a naked pregnant woman. Pope Francis’ meeting on the Amazon is wrapping up after three weeks of debate over married priests, the environment _ and the destruction of indigenous statues that underscored the willingness of conservatives to violently vent their opposition to the pope. (AP PhotoAndrew Medichini)

The most controversial proposals include whether married men can be ordained priests to address the acute shortage of clergy in the Amazon region, where isolated communities can go months without having a proper Mass.

Also debated were whether women — who already carry out the lion's share of the church's work — could be ordained deacons in a new Amazonian rite that takes into account the unique spirituality of Amazonian faithful and their relationship with nature.

Several Amazonian bishops expressed support for both proposals, which would represent a dramatic shift from centuries of Catholic tradition. But Vatican cardinals who are also voting members of the synod expressed caution and insisted on the gift and value of a celibate priesthood. 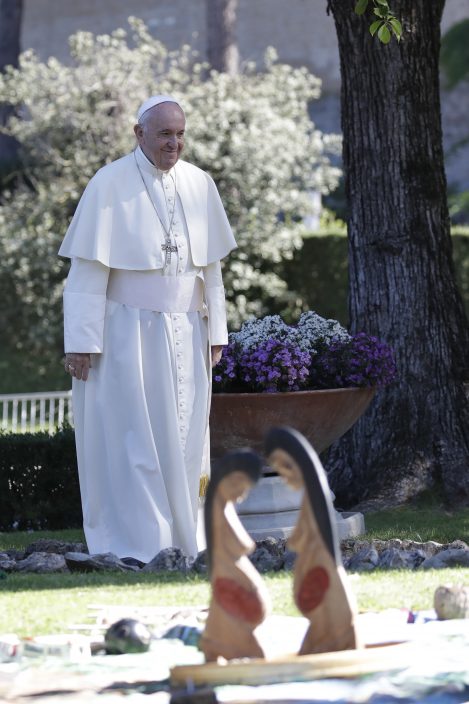 In this photo taken on Friday, Oct. 4, 2019, Pope Francis walks past wooden statues portraying naked pregnant women as he arrives to attend a tree planting rite with members of Amazon indigenous populations, in the Vatican gardens. Pope Francis’ meeting on the Amazon is wrapping up after three weeks of debate over married priests, the environment _ and the destruction of indigenous statues that underscored the willingness of conservatives to violently vent their opposition to the pope. (AP PhotoAlessandra Tarantino)

While those theological debates raged in the synod hall, the more significant debate concerned the videotaped theft early Monday of the indigenous statues from the Santa Maria in Traspontina church, just down the block from St. Peter's Square.

The church has been the headquarters of parallel synod events featuring indigenous, environmental and Catholic groups from the region, and the statues were featured prominently in some of the indigenous services.

According to video of the theft that was widely circulated on conservative and traditionalist Catholic media, at least two men entered the church before dawn, took the statues from the altar of a side chapel and threw them from a bridge into the Tiber River. 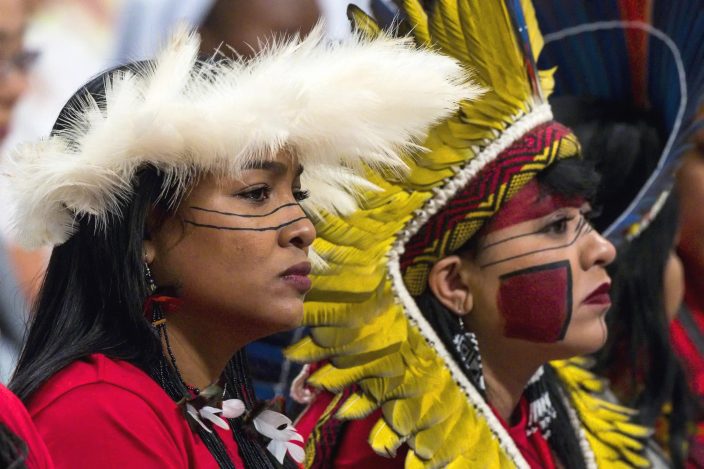 Participants in the Amazon synod attend a Mass celebrated by Pope Francis on the occasion of the World Missionary Day, at St. Peter's Basilica at the Vatican, Sunday, Oct. 20, 2019. (Angelo CarconiANSA via AP)

The theft was celebrated by conservative and traditionalist Catholics who considered the statues pagan idols that had no business being placed at the altar of a Catholic Church, much less used in official Vatican ceremonies.

The statues had actually sparked outrage at the start of the synod, when one was featured at an indigenous tree-planting ceremony in the Vatican gardens attended by Francis.

Cardinal Gerhard Mueller, the conservative German sacked by Francis in 2017 as the Vatican's doctrine chief, said the "great mistake" was to bring the "idols" in the church in the first place. He cited the biblical First Commandment prohibiting idolatry or worshipping false gods. 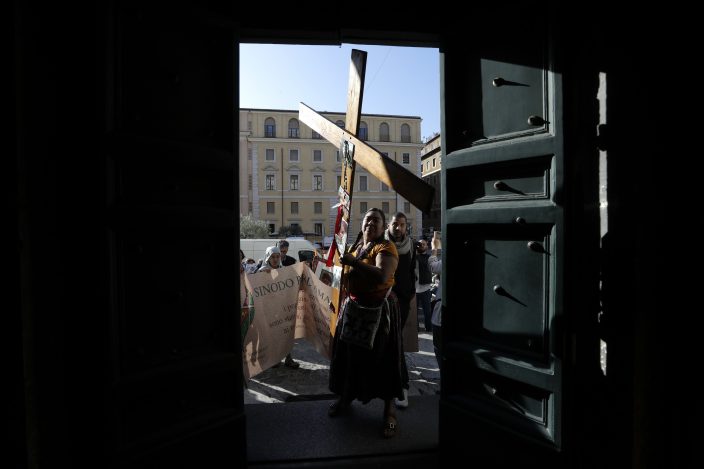 A woman carrying a cross enters in the Santa Maria in Transpontina Church, during a Via Crucis (Way of the Cross) procession of members of indigenous populations from St. Angelo Castle to the Vatican, Saturday Oct. 19, 2019. Pope Francis is holding a three-week meeting on preserving the rainforest and ministering to its native people as he fended off attacks from conservatives who are opposed to his ecological agenda. (AP PhotoAndrew Medichini)

"To throw it out can be against human law, but to bring the idols into the church was a grave sin, a crime against divine law," he told conservative U.S. Catholic broadcaster EWTN.

The Vatican has insisted the statues were symbols of life, fertility and Mother Earth, and denounced the theft as a hate-filled, "violent and intolerant gesture."

"In the name of tradition and doctrine, they contemptuously threw away a symbol of maternity and sacredness of life," the Vatican's editorial director Andrea Tornielli wrote in Vatican media. 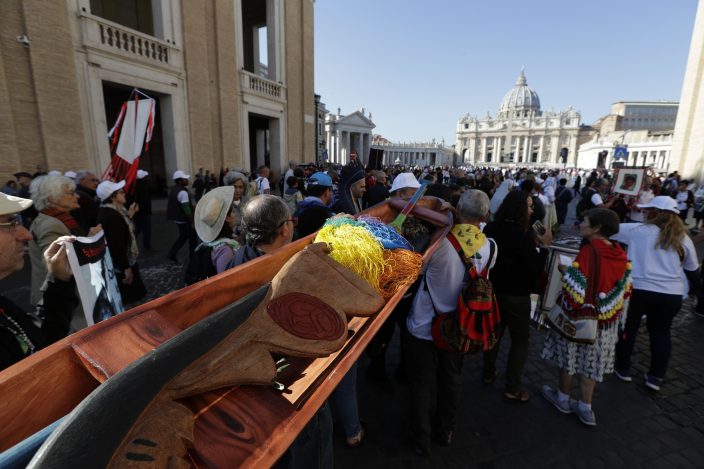 Members of Amazon indigenous populations walk during a Via Crucis (Way of the Cross) procession from St. Angelo Castle to the Vatican, Saturday, Oct. 19, 2019. Pope Francis is holding a three-week meeting on preserving the rainforest and ministering to its native people as he fended off attacks from conservatives who are opposed to his ecological agenda. (AP PhotoAndrew Medichini)

He noted that one of most influential Catholic thinkers, St. John Henry Newman — who was canonized during the synod — once recalled that Christianity's most important symbols all had pagan origins.

The theft has dominated debate in Catholic media and Catholic Twittersphere, with conservatives cheering the destruction of what they consider symbols of pagan worship and progressives accusing the culprits and their supporters of racism.

"We do not use the term 'racists' lightly, but what else is it?" asked the National Catholic Reporter, a progressive Catholic magazine, in an editorial this week.

"Can you imagine the conservative outcry if someone tossed the image of Our Lady of Czestochowa into the Tiber?" it said, referring to the "Black Madonna" icon that was particularly dear to St. John Paul II, a hero to many conservatives.

Whatever the symbolic meaning of the statues, their theft and destruction underscored the increasingly bold lengths to which conservatives are going to voice opposition to Francis and his agenda focusing on the poor, migrants and the environment.

Already, some traditionalists have accused him of heresy for showing flexibility toward allowing divorced and civilly remarried Catholics to receive the sacraments.

Any decision to open up the priesthood to married men or to ordain women deacons will likely only fuel their anger and increase calls for a future pope who is more rooted in orthodox doctrine like John Paul and emeritus Pope Benedict XVI.

Francis is well aware of his conservative opponents — he recently quipped it was an "honor" to be attacked by his American critics.

Other critics are increasingly striking out against him from within the Vatican walls. As the synod was underway, a new scandal over the Vatican's shady finances exploded, sparking alarm among Francis' supporters that there was a concerted attack against him by the Italian "old guard" within the Holy See bureaucracy.

In his morning homily Friday, Francis reflected on his own inner struggle to want to do good but not be able to do it.

"It's a battle between good and evil," he said.

For Napoli fans, the team is a religion and Maradona is ...

When Lionel Messi climbs up the st ...

After their call for married priests, pope thanks bishops