Israel's prime minister on Sunday expressed his support for a "broad national unity government" as a new round of talks began with his chief challenger over a potential power-sharing agreement.

Speaking to his Cabinet, Prime Minister Benjamin Netanyahu said such a coalition is essential for Israel to face what he said were mounting security challenges around the region.

"We must make tough decisions that require a government with broad shoulders," he said. "This is not a political question, but a national and security question of the highest order. I hope that we can advance this goal in the coming days." 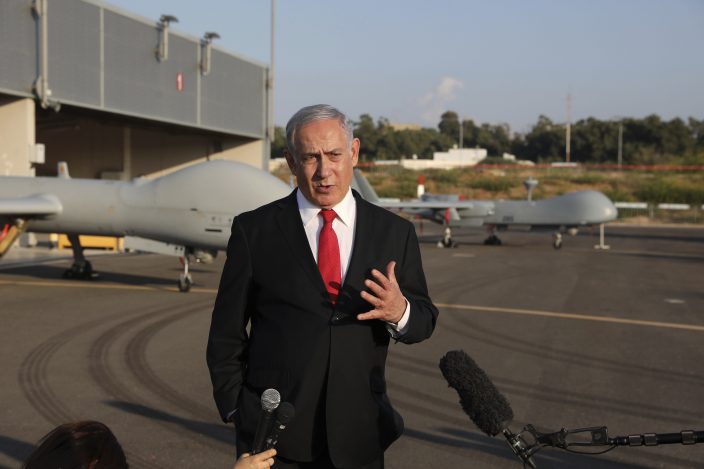 Israeli Prime Minister Benjamin Netanyahu delivers a statement to the media after he reviews an exhibition by the Israeli Air Force at the Palmachim Air Force Base, near the city of Rishon LeZion, Israel, Sunday, Oct. 27, 2019. (Abir SultanPool Photo via AP)

Israel has been paralyzed by political deadlock following an inconclusive election last month, with neither Netanyahu's Likud nor the rival Blue and White party in control of a 61-seat majority in parliament.

After nearly a month of efforts, Netanyahu last week said he had failed to cobble together a coalition. Israel's president has now given the task to Blue and White leader Benny Gantz.

With Blue and White controlling 33 seats in parliament and Likud holding 32, the two parties together have enough support to form a government together. While both men support the idea of a unity deal, they have disagreed over who should lead it.

Netanyahu wants his traditional religious and nationalist allies to sit with Likud and Blue and White. Gantz, a former military chief, refuses to sit under a Netanyahu-led government while the long-serving leader faces possible indictment for corruption charges. Israel's attorney general is to decide on whether to charge Netanyahu in the coming weeks.

Gantz and Netanyahu were scheduled to meet Sunday evening. Ahead of their meeting, negotiators from the two parties met for preparatory talks that were "held in good spirits," according to a Blue and White statement.

It is the first time in more than a decade that a candidate other than Netanyahu has been given the opportunity to form a government.

But without Likud, Gantz's options are limited. He can try to break up Netanyahu's right-wing bloc and win over smaller hard-line parties. So far, there is no sign of that happening.

His remaining potential partners include a diverse group of parties that have little in common, including the secular ultranationalist Yisrael Beitenu party, dovish Jewish parties and a grouping of Arab parties, which have never sat in a government before.

Lieberman has refused to endorse either candidate for prime minister and demands they reach a unity deal. If the sides fail, Israel could face a third election early next year.

The Mideast peace plan announced b ...

Israel's Netanyahu shores up base but obstacles remain