Larry Rothschild has been fired as the Yankees' pitching coach after nine seasons.

New York announced his departure Monday, nine days after the team was eliminated by Houston in the AL Championship Series. The Yankees decided it was time for a new voice in the role, a person familiar the decision told The Associated Press, speaking on condition of anonymity because details of Rothschild's departure were not announced.

Sam Briend of data-driven Driveline Baseball in Kent, Washington, was hired in June as the Yankees' director of pitching, an indication New York may further increase its use of analytics. 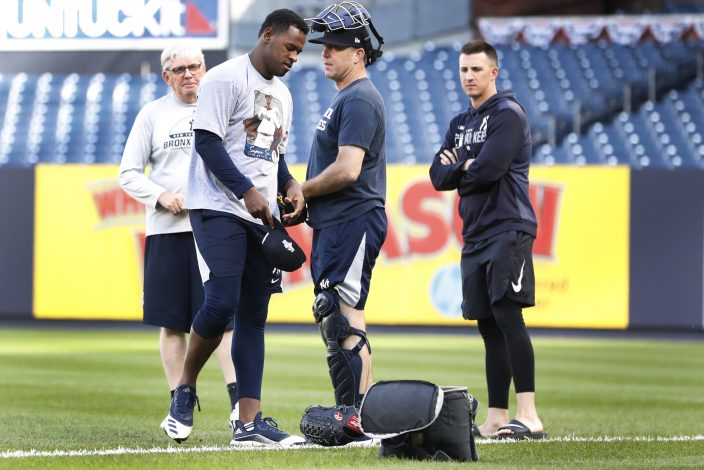 New York Yankees pitching coach Larry Rothschild, back left, watches as starting pitcher Luis Severino, second from left, gathers his belongings after a brief workout, Monday, Oct. 14, 2019, at Yankee Stadium in New York on an off day during the American League Championship Series against the Houston Astros. (AP PhotoKathy Willens)

Rothschild replaced Dave Eiland in November 2011 to work for then-Yankees manager Joe Girardi, who had been a catcher for the Cubs during Rothschild's first season as Chicago's pitching coach. Rothschild stayed on when Aaron Boone replaced Girardi ahead of the 2018 season.

Girardi was hired last week to manage Philadelphia, creating the possibility Rothschild could work under him again.

"Obviously he and I have a couple positions that we need to fill, and we're going to talk about every name that is out there and get who we think the best person for Philadelphia," Girardi said.

He spent 11 years in the minor leagues as a pitcher for Cincinnati and Detroit, and he had a 5.40 ERA and no decisions in seven big league relief appearances with the Tigers in 1981 and '82.

New York won the AL East for the first time since 2012 this season and finished with 103 wins.

"Larry is someone I leaned on extensively over these past two years. I'm truly grateful that I had someone as established and loyal as Larry as I made my transition to the dugout," Boone said in a statement. "Seeing him work day after day, I have a deep appreciation for how devoted he was to his craft and how tirelessly he dove into his responsibilities. His distinguished career clearly reflects how highly he is regarded amongst his peers in baseball."

A federal judge on Friday dismisse ...