Howie Kendrick sure has a knack for the dramatic.

At 36 — nine years removed from is only All-Star appearance — he hit a go-ahead, two-run homer off Will Harris in the seventh inning that lifted the Washington Nationals over the Houston Astros 6-2 Wednesday night in Game 7 for his team's first World Series title.

Steady-handed and battle-tested, Kendrick came through at the biggest moments of the Nationals' October run.

Washington Nationals' Howie Kendrick reacts after hitting a two-run home run during the seventh inning of Game 7 of the baseball World Series against the Houston Astros Wednesday, Oct. 30, 2019, in Houston. (AP PhotoMatt Slocum)

His grand slam against Joe Kelly broke a 10th-inning tie in the decisive Game 5 of the Division Series, giving the Nationals a 7-3 win — just the second extra-inning slam in postseason history.

He hit .333 with four doubles and four RBIs in a League Championship Series sweep of St. Louis, earning MVP.

Kendrick was just 5 for 22 with one RBI in the World Series when he came to the plate in the seventh inning of Game 7. Anthony Rendon had just homered off Zack Greinke, cutting the Nationals' deficit to 2-1. 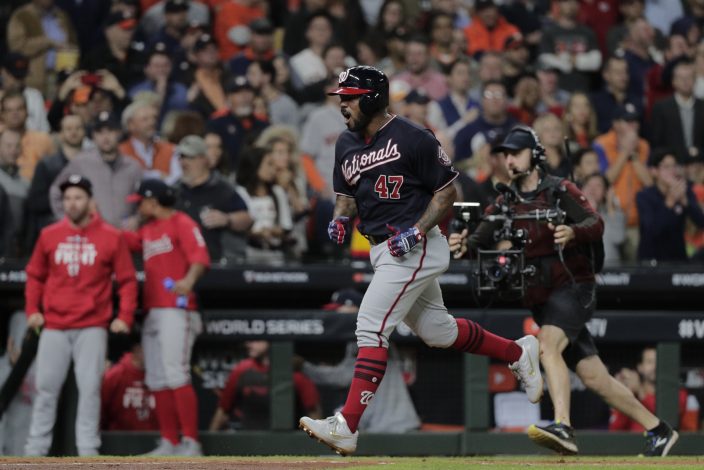 Juan Soto walked on five pitches and Harris relieved. Kendrick swung past a curveball and drove a cutter on the low, outside corner down the right-field line. George Springer sprinted toward the corner. Harris watched. The crowd was silenced, hoping the ball would be caught or curve foul.

Instead, it bounced off the foul pole screen.

Kendrick shouted his way around the bases after the biggest hit of his 14-year career. He danced in the dugout with his younger teammates, and for one last time this season, Kendrick and Adam Eaton celebrated by shifting gears and slamming the gas pedal in their imaginary car. Forget about over the hill — Kendrick showed he still had plenty in the tank.

He became the second player to hit a home run in a winner-take-all Series game from the seventh inning on that took his team from a deficit into the lead, following an eighth-inning drive by Pittsburgh's Hal Smith in Game 7 of the 1960 Series against the New York Yankees.

He's also the only player 36 or older to hit a go-ahead homer in the seventh inning or later of a winner-take-all postseason game. Of course, he's done it twice, both this year.

Kendrick singled in the eighth, reaching for the third time.

His first full season with Washington ended early in 2018, when he tore his right Achilles tendon while retreating to catch a fly ball to left field against the Los Angeles Dodgers on May 19. Even then, he didn't get too down.

"There's no point in being mopey about it," he said. "It won't heal as fast. So the happier I am, the faster I'll heal."

He returned this year to hit .344 with 17 homers and 62 RBIs in 121 games, missing time in August with a strained left hamstring.

Little did he know his signature moments were ahead. Two of them.

The callers were in tears. One by ...