The Rock and the president just might be the true headliners at Madison Square Garden in a rare UFC card without a championship fight.

Well, at least not one confined to the standard weight classes.

Nate Diaz and Jorge Masvidal are set to slug it out Saturday night in the main event of UFC 244 without much more than a made-for-PPV baddest man in MMA title at stake in a fight that has attracted the attention of two global figures. 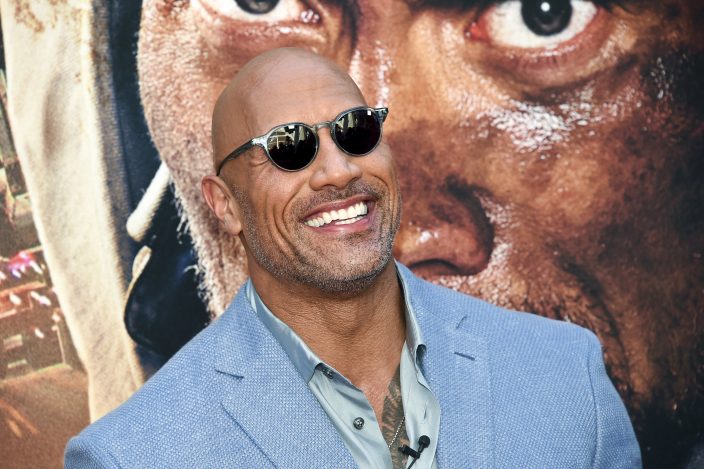 FILE - In this July 10, 2018, file photo, actor Dwayne Johnson attends the "Skyscraper" premiere in New York. Johnson will present the championship belt to the winner of the Nate Diaz vs Jorge Masvidal UFC fight at Madison Square Garden in New York on Saturday, Nov. 2, 2019. (Photo by Evan AgostiniInvisionAP, File)

Arriving straight from Jabroni Drive, The Rock is set to take that $50,000 custom-made , one-fight-only Baddest Mother (Censored!) championship belt , shine it up real nice, and stick it straight around the waist between the winner of the Diaz vs. Masvidal slugfest. President Donald Trump will take a break from an impeachment inquiry to catch a seat as Diaz and Masvidal (-160) lock up to crown the undisputed champ of UFC 244's crudest named title.

"That's the best fighter there is," Diaz said. "Pound for pound, GOAT type of (stuff)."

Diaz fought just three months ago when he returned from a three-year hiatus to punish Anthony Pettis in a unanimous decision victory at UFC 241. Diaz (20-11) willed the championship into existence when he demanded UFC create the R-rated billing and called out Masvidal (34-11) for his next fight. UFC didn't wait long to grant Diaz's wish — President Dana White agreed to go along with the stipulation , with the caveat that the title is decided only once.

FILE - In this Aug. 25, 2019, file photo, President Donald Trump smiles during a news conference at the G-7 summit in Biarritz, France. Trump is expected to watch the UFC 244 fight between Nate Diaz and Jorge Masvidal at Madison Square Garden in New York on Saturday, Nov. 2, 2019. (AP PhotoAndrew Harnik, File)

Call it an extravagant publicity stunt, perhaps, for the winner of the 170-pound bout who gets bragging rights, the belt, and no title defenses.

Kelvin Gastelum (-210) takes on Darren Till in a middleweight bout in the co-main event, and Stephen "Wonderboy" Thompson (-135) has a welterweight division fight with Vicente Luque in UFC's fourth card at the Garden.

The biggest dose of star power might come in the seats.

"Jumanji" star Dwayne "The Rock" Johnson will present the winner with of a championship belt that has that manufactured WWE feel.

"Very befitting for the biggest fight of the entire year," Johnson said. "This fight is going to be electrifying."

Trump is tight with White in a relationship that dates to UFC's infancy before its rise into national prominence. New Jersey was one of the first states that embraced UFC, and White credits cards at the Trump Taj Mahal for helping the company grow into a heavyweight in the sports world. White spoke at Trump's request at the Republican National Convention and the bombastic pair make time for dinners out when they can.

Trump's reception from the New York crowd might be as fascinating as the result of the main event. Trump was loudly jeered while attending a World Series last Sunday in Washington. In New York, UFC fighters — about as politically uncouth as they come — have embraced Trump's made-for-TV schtick. Donald Jr. and Eric Trump attended a recent UFC card in New Jersey to support MAGA fan Colby Covington.

"Real recognize real," Masvidal said. "No matter what your views are on Trump as a president, the guy's a (BMF), man. The money's that he's made, the obstacles that's he conquered, he's a (BMF) in his own way."

Masvidal said he didn't want to "wade too far into politics" because the American fighter born to a Cuban father and Peruvian mother said "a lot of the Latin community might be upset at me."

Masvidal had the New York crowd on his side at an open workout this week at MSG. Masvidal is coming off the fastest knockout in UFC history, needing all of five seconds to take out Ben Askren in July at UFC 239. He took the workout stage and put UFC officials on edge when he selected random fans to come up from the audience and spar (body shots, only). Broadcaster Megan Olivi consoled one young boy plucked from the crowd who was seemingly panicked he would have to fight. The kid just wanted to meet Masvidal, not lace 'em up. No worries, the 34-year-old Masvidal hopped down and walked the roped off area snapping selfies with fans screaming his name. He also had the crowd going nuts when he told them, "I'm going to answer some questions from you, not the media." Huh, hating on the media. Sounds familiar. Same with his dose of braggadocio.

"I put an end to a lot of guys never been knocked down, never been stopped," Masvidal said.

There was brief pause in the hype for the fight.

Diaz, who split two tremendously entertaining matchups with Conor McGregor in 2016, has become one of UFC's most popular personalities without ever winning a championship. The weed-smoking anti-hero stunned fight fans last week when he tweeted he would drop out of the fight in the wake of adverse findings by the United States Anti-Doping Agency (USADA) in a pre-fight drug test taken earlier this month. Diaz insisted he was as clean as a fighter put USADA on a foul-mouth blast and refused to fight until he was publicly cleared.

"I'm not staying quiet and figuring it out after the fight," Diaz tweeted in about the only sentence in a lengthy statement without multiple swear words. "That's cheating."

It's that renegade spirit that helped skyrocket Diaz's popularity and why UFC's 500th show should come with a parental advisory stamp for any fan who wants to fork over their PPV cash.

Bethlehem's storied Church of the ...