Sakshi Chauhan has not left her house in a quiet inner-city slum in the Indian capital for the past six days on her doctor's orders.

The 22-year-old call center operator is recovering from a severe throat infection and the thick smog now blanketing New Delhi has made even breathing dangerous.

"The moment I step outside, I can't breathe properly," she said. "I have never seen this level of pollution in my entire life." 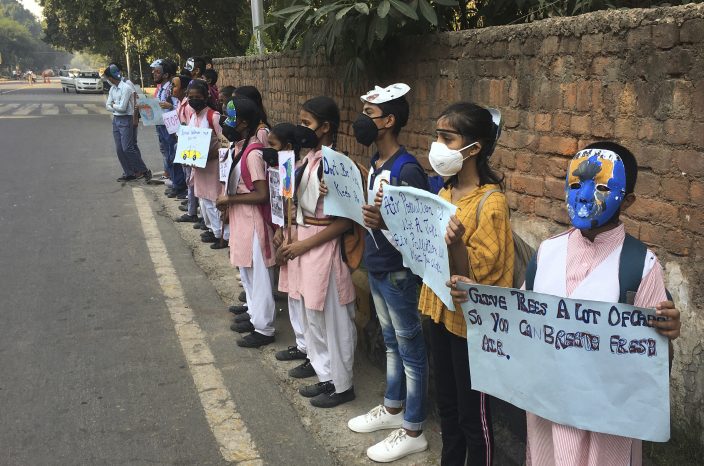 Schoolchildren protest outside the Indian Environment Ministry against alarming levels of pollution in the city, in New Delhi, India, Tuesday, Nov. 5, 2019. Air pollution in New Delhi and northern Indian states peaks in the winter as farmers in neighboring agricultural regions set fire to clear land after the harvest and prepare for the next crop season. The pollution in the Indian capital also peaks after Diwali celebrations, the Hindu festival of light, when people set off fireworks. (AP PhotoShonal Ganguly)

The 20 million residents of New Delhi, already one of the world's most polluted cities, have been suffering for weeks under a toxic haze that is up to 10 times worse than the upper limits of what is considered healthy. The pollution crisis is piling public pressure on the government to tackle the root causes of the persistent haze.

Air pollution in New Delhi and northern Indian states peaks in the winter as farmers in neighboring agricultural regions set fire to clear land after the harvest and prepare for the next crop season. The pollution in the Indian capital also peaks after Diwali celebrations, the Hindu festival of light, when people set off fireworks.

A declared public health emergency has remained in place in the city for the past five days. Schools have stayed closed and authorities have been handing out free anti-pollution masks to children. 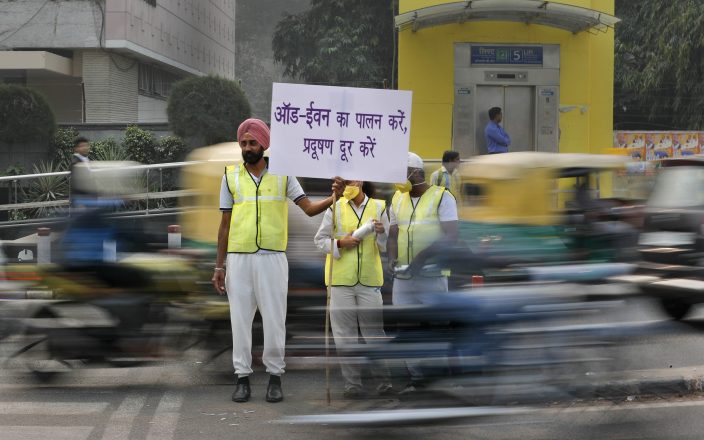 Volunteers wear pollution masks as they stand at a busy crossing with the banner saying obey odd and even, remove pollution, in New Delhi, India, Monday, Nov. 4, 2019. Authorities in New Delhi are restricting the use of private vehicles on the roads under an "odd-even" scheme based on license plates to control vehicular pollution as the national capital continues to gasp under toxic smog. (AP PhotoManish Swarup)

New Delhi's government has introduced a system that restricts many private vehicles from taking to the roads for two weeks. It has ordered firefighters to sprinkle water from high-rise buildings to settle the dust, tried to snuff out garbage fires and ordered builders to cover construction sites to stop dust from enveloping the area.

India's health minister earlier played down the health consequences of the dirty air, insisting it is mainly a concern for those who have pre-existing lung conditions. Doctors in the capital, however, say many of their patients these days are complaining of ailments that stem from the filthy air they breathe.

Dr. Salil Sharma Kumar, a throat specialist, said that 95% of the patients he has been treating over the last 10 days are sick because of the foul air.

"I have patients from all age groups and most of them are nonsmokers who complain of breathlessness, chest congestion, fatigue and weakness," Kumar said. "In some cases, I had to put some patients on a ventilator because they couldn't breathe."

"We are right in the middle of a health emergency," he said.

A study published in The Lancet estimated that in 2017, air pollution killed 1.24 million Indians — half of them younger than 70, lowering the country's average life expectancy by almost 1.7 years.

India's Supreme Court on Monday said the capital choking every year "could not be allowed in a civilized country."

In a ruling that followed petitions filed by activists, the top court's judges ordered an immediate halt to the practice of farmers burning their fields in the neighboring states surrounding the capital.

Some people distraught over the pollution are considering leaving the city for good.

Devendra Verma, a street vendor, did not go to work for three days last week. He said he was too weak to leave his house as filthy air made him feel fatigued.

"The city is not livable anymore," he said. "Sometimes I think I should pack my bags and leave Delhi for once and all."