New Zealand Rugby has announced the panel which will select a new All Blacks head coach to replace Steve Hansen, just as the competition for the position became more complicated.

NZR chairmen Brent Impey, who will sit on the panel, said a small group of coaches "familiar with New Zealand's professional rugby environment" had been approached and invited to apply.

Impey said short-listing, interviews and negotiations will be conducted through November and early December and the successful applicant will be announced later that month. 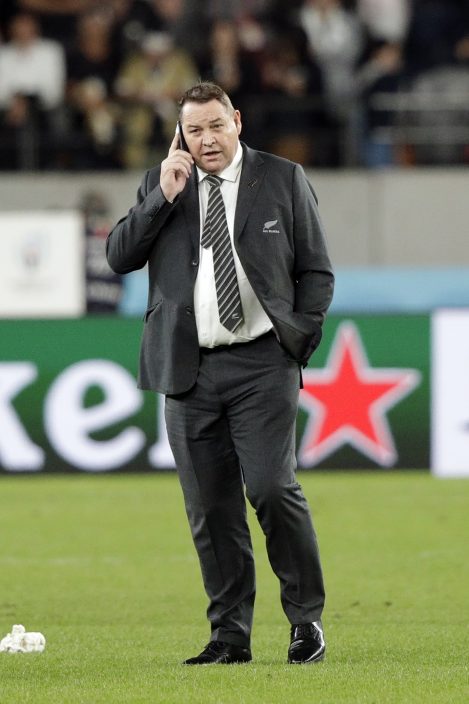 "This is a hugely exciting time for New Zealand Rugby," Impey said. "We know that the All Blacks and New Zealand have been served well by exceptional coaches, so we are well aware of the importance of the task ahead.

"We believe we have an excellent group of people on the panel, balancing the experience of winning high-performance teams and leadership with external perspective and experience."

The appointment of a new head coach and assistants appeared to become more complex Wednesday after comments made by current Japan assistant coach and former All Blacks flyhalf Tony Brown.

Brown said he had been asked to work as an assistant to two of the leading candidates for Hansen's role, current All Blacks assistant Ian Foster and Crusaders Super Rugby coach Scott Robertson.

In rejecting both approaches, Brown said he would only work with current Japan head coach Jamie Joseph. Joseph and Brown have a long and successful coaching partnership, guiding the Highlanders to the Super Rugby title and Japan to the quarterfinals of the World Cup.

It isn't yet clear whether Joseph will apply for the All Blacks role or stay in Japan, and Brown said he would stick with Joseph whatever his decision.

"I made a decision I'm going to stay with Jamie," Brown said on Sky Sports television. "If he applies for the All Blacks, I'm in. If he stays with Japan, I'm in.

Hansen has strongly endorsed Foster as his successor and his comments were echoed Tuesday by All Blacks playmaker Beauden Barrett.

"I've really loved worked with (Foster) over the last eight years," Barrett said. "He's a very intelligent coach, a great team man and hopefully we can have some continuity going forward."

Hansen was All Blacks head coach for eight years from 2011, winning 93 of his 107 matches in charge.

Deforestation in the Brazilian Amazon may be at 14 year ...

A judge has ordered the University ...