President Donald Trump and his allies are crying foul over an impeachment process firmly rooted in the Constitution they swore to uphold.

Trump is also assailing the lawyer for the whistleblower at the heart of the impeachment inquiry. He accurately noted the attorney's expressions of hostility to his presidency while overlooking how the lawyer was a thorn in Hillary Clinton's side, too.

A look at recent comments: 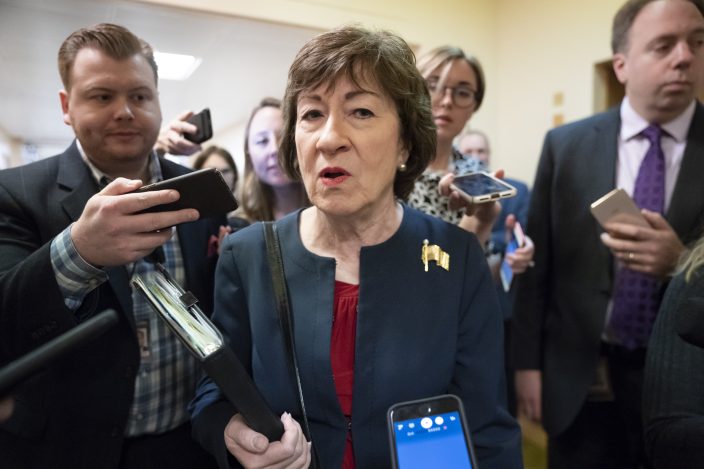 Sen. Susan Collins, R-Maine, is surrounded by reporters as she heads to vote at the Capitol in Washington, Wednesday, Nov. 6, 2019. (AP PhotoJ. Scott Applewhite)

TRUMP: "It was just explained to me that for next weeks Fake Hearing (trial) in the House, as they interview Never Trumpers and others, I get NO LAWYER & NO DUE PROCESS." — tweet Thursday.

THE FACTS: The hearing is a hearing, not a trial, and it is unfolding according to the usual process.

Trump is correct that he and his legal team are excluded from public hearings that begin next week, but he hasn't been charged with anything and has no constitutional right to be represented by a lawyer in this proceeding.

In that sense, his position is not much different from criminal suspects who are being investigated but haven't been charged, or from past presidents at this stage of impeachment proceedings.

The coming public hearings led by the House intelligence committee, like the ongoing closed-door proceedings, are more akin to the investigative phase of criminal cases, generally conducted in private and without the participation of the person under investigation.

But the House also has laid out procedures that do give Trump and his lawyers some rights in future House Judiciary Committee hearings that presumably would result in the drafting of impeachment articles.

In Judiciary hearings, both open and closed, Trump would be invited to attend and his lawyers could question witnesses and object to testimony and evidence, similar to the process in the Richard Nixon and Bill Clinton impeachment inquiries.

The House could cut back on the lawyers' participation if the White House refuses to provide documents or allow witnesses to testify.

If there is a Senate trial, Trump's legal team would defend the president against impeachment articles approved by the House in an environment that would look like a typical trial in some respects.

The ability to call witnesses, though, would be up to the Senate and, presumably, the subject of private negotiations between the Republicans who control that chamber and the Democratic minority.

SEN. RAND PAUL: "Enshrined in the 6th Amendment is the right to confront your accuser." — tweet Tuesday.

SEN. LINDSEY GRAHAM, chairman of the Senate Judiciary Committee: "We're not going to try the president of the United States based on hearsay. Every American has a right to confront their accuser." — interview on Sept. 29 on CBS' "Face the Nation."

THE FACTS: Graham and Paul are omitting key words from the start of the Sixth Amendment: "In all criminal prosecutions."

Moreover, the whistleblower's account has been substantiated by multiple on-the-record accounts of government officials and the rough transcript of Trump's phone call with Ukraine's president that the White House released.

Paul, Graham and Trump himself are interested in unmasking the identity of the whistleblower at the heart of the impeachment inquiry. His or her identity is protected under federal whistleblower law.

The comments by Trump, Graham and Paul invoke various notions of fairness enshrined in the Constitution. Trump's reference to due process comes from the Fifth and 14th amendments, which hold that before people can be deprived of life, liberty or property, they must get a fair shake, or due process of law.

The Sixth Amendment guarantees a lawyer for criminal defendants and the right to confront their accusers. As it happens, the impeachment process also is outlined in the Constitution and it gives the House of Representatives the sole power to impeach and the Senate the sole power to remove an official, including the president, from office.

In general terms, impeachment by the House is akin to an indictment and trial by the Senate resembles a criminal prosecution. The hearings might or might not lead to those two stages.

WHITE HOUSE: "Before there was a whistleblower, there was the whistleblower's attorney_tweeting about overthrowing the government because he didn't like the election results." — tweet Thursday.

THE FACTS: Trump and his team can't be faulted for believing that Mark Zaid, one of the whistleblower's attorneys, has it out for the president.

That does not mean Zaid can be dismissed as a Democratic partisan, either.

The longtime Washington lawyer has represented people in both parties, causes dear to each side and a line of whistleblowers.

Trump and his team are pointing to a January 2017 tweet by Zaid, who says he's a registered independent, in which he writes "#coup has started. First of many steps. #rebellion. #impeachment will follow ultimately."

The hyperbolic tweet was in response to news that Trump had fired acting Attorney General Sally Yates after she refused to enforce a ban on travel for people living in several predominantly Muslim countries.

Under ethics rules, attorneys are charged with representing a client responsibly regardless of their personal views. The whistleblower is also represented by Andrew Bakaj, a former CIA intelligence officer.

Some of Zaid's legal work over the years has involved issues close to Trump, such as his cases challenging Clinton's use of a private email server.

Zaid represented a veteran's group in a lawsuit against the State Department that sought records of Clinton's response to the Benghazi attacks as secretary of state. The suit targeted Clinton's reliance on the private server for government communication, saying "it may have been a deliberate attempt to shield communications from capture by governmental systems and the public's eye, for reasons yet unknown."

He also represented CIA contractors who were in Benghazi on the night of the attacks.

Zaid served as an attorney for former Republican North Carolina Rep. Walter Jones and The Daily Caller, a conservative publication, in public records lawsuits against the federal government.

Zaid now says his reference to a "coup" referred to those working in the Trump administration who were standing up to the president to help enforce the rule of law.