There's just over a month to go until Britain's Dec. 12 election, and the country's political parties are battling over funding promises, policy priorities and Brexit plans.

Here is a look at some key numbers in an election that could determine not only who governs Britain, but when, how — or even whether — the country leaves the European Union:

46 million: The number of eligible voters in the U.K. 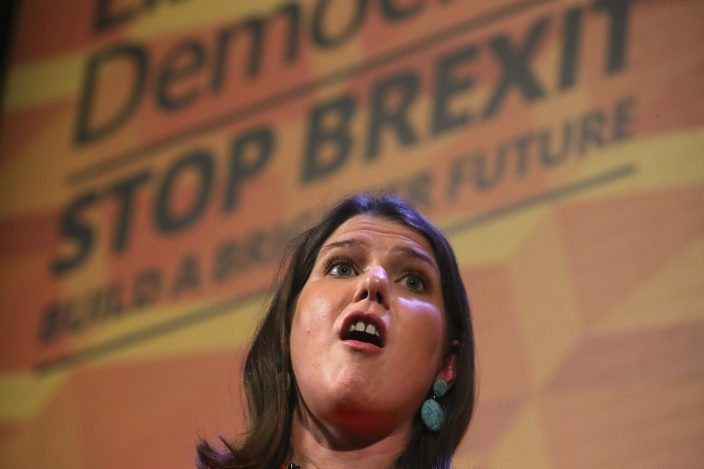 Britain's Liberal Democrats leader Jo Swinson makes a speech at a rally at the Battersea Arts Centre in Lavender Hill, while on the General Election campaign trail in London, Saturday, Nov. 9, 2019. Britain goes to the polls on Dec. 12. (Aaron ChownPA via AP)

650: The number of seats in the House of Commons, all up for grabs in the election. Any party that wins a majority — or becomes the largest party, even without a majority — can form a government, with its leader as prime minister.

298: The number of seats held before the election by Prime Minister Boris Johnson's ruling Conservatives — more than 20 short of a majority. The government's lack of a majority meant it struggled to pass key measures needed for Britain to leave the European Union.

243: The number of seats held by the left-of-center opposition Labour Party, which is battling to return to office for the first time since 2010. Labour plans to downplay Brexit and focus on health care, education and social welfare, which all saw funding cuts under Conservative governments.

96: The number of years since Britain last had a December election. British elections are usually held in the late spring, when the weather is better and the days are longer.

82: The number of days until Britain is due to leave the EU. Brexit day was supposed to be Oct. 31, but with Britain's politicians deadlocked, the EU granted a three-month delay until Jan. 31.

72: The number of lawmakers not running for re-election amid Britain's toxic political atmosphere. Politicians on both sides of the Brexit argument have received abuse and threats. Those leaving include many moderate pro-EU Conservatives, Labour legislators who say their party has not stamped out anti-Semitism and high-profile female legislators, who have received a disproportionate amount of abuse.

42.8%: The portion of political parties' campaign spending that went to digital advertising during the last election in 2017 — up from just 0.3% in 2011. It's expected to be even more this time.

35: The number of seats in Parliament held by the Scottish National Party, which opposes Brexit and wants Scotland to leave the U.K. and become an independent country.

20: The number of seats held in Parliament by the pro-EU Liberal Democrats, who want to cancel Brexit altogether.

19.5 million pounds ($25 million): The maximum a party can spend on advertising, campaigning costs and other expenses if it contests all 650 constituencies across the U.K. The spending limit is calculated at 30,000 pounds ($38,650) per seat.

9: The number of years the Conservative Party has been in power.

3: Number of televised debates that Johnson and Labour leader Jeremy Corbyn have agreed to take part in. The Liberal Democrats are angry that their leader, Jo Swinson, has only been invited to one of them.

0: The number of seats in Parliament now held by the recently formed Brexit Party, which wants to leave the EU without a divorce deal. The party, led by Nigel Farage, plans to run hundreds of candidates in the Dec. 12 election.

Feds threaten funds to NYC, Seattle and Portland over u ...