The Latest on Hong Kong protests (all times local):

A man has been set on fire following an apparent dispute over national identity in Hong Kong, where police shot a protester on a day of escalating violence. 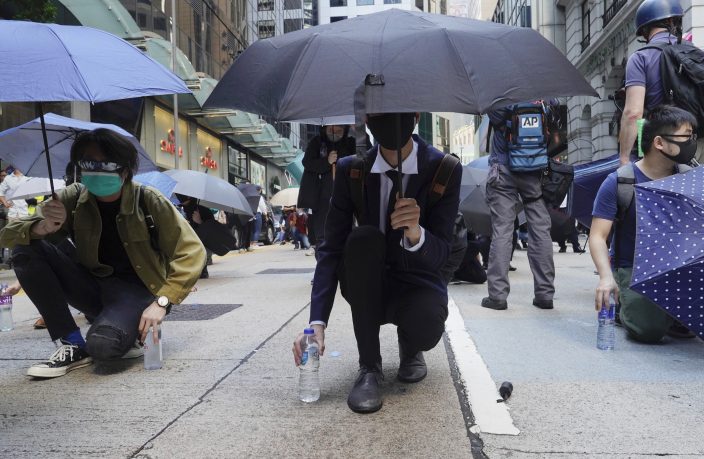 Protesters with umbrellas and bottles of water to douse tear gas canisters form up during confrontation with police in Hong Kong on Monday, Nov. 11, 2019. A protester was shot by police Monday in a dramatic scene caught on video as demonstrators blocked train lines and roads during the morning commute. (AP PhotoVincent Yu)

The man set on fire around midday was in critical condition in a city hospital. Video posted online show him arguing with a group of young people, before someone douses him with a liquid and strikes a lighter.

The police shooting was also captured on video Monday as demonstrators blocked train lines and roads during the morning commute to push their demands for democratic reforms. The Hong Kong hospital authority said the person shot was in critical condition.

The violence is likely to further inflame passions after a student died Friday from injuries suffered in an earlier fall and police arrested six pro-democracy lawmakers over the weekend.

A police officer collars one protester and then shoots another who approaches in the video posted on Facebook on Monday by online video outlet Cupid Producer.

The shooting occurred in a crosswalk at a large intersection strewn with debris that had backed-up traffic.

The officer also fires at a third protester who approached. It was unclear if the protester was hit.