Breezy Johnson's social media post captured a moment more than her mood: "Sometimes you reach the top of the hill, only to realize there is a mountain beyond."

"Hang in there," the American ski racer's supporters commented. "The view will be spectacular," they offered.

The truth: Johnson was crestfallen after tearing the PCL and MCL ligaments in her left knee following a June training wipeout. 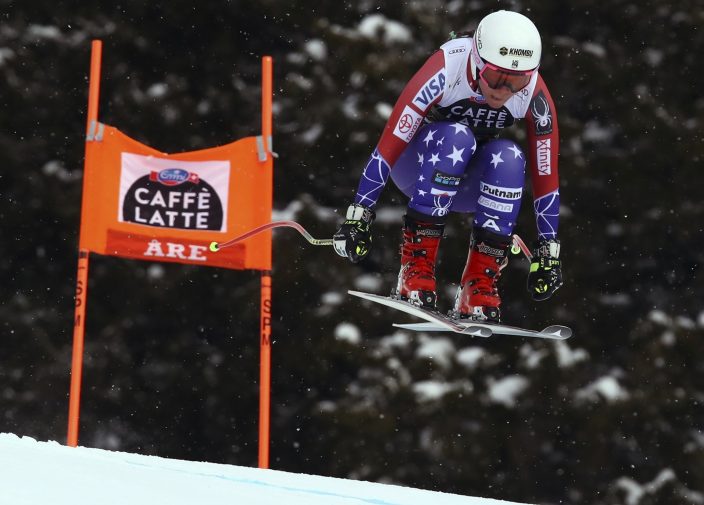 FILE - In this March 14, 2018, file photo United States' Breezy Johnson speeds down the course during a women's downhill, at the alpine ski World Cup finals in Are, Sweden. Johnson tore a ligament in her knee during a second straight offseason training session. (AP PhotoAlessandro Trovati, File)

She was just back on the snow, too, after sitting out all last season with a torn right ACL .

Only, she couldn't have that last part.

So Johnson and her medical team devised an eight-step plan to get her back in the start gate by as early as late January. She needed that incentive for peace of mind — to reach the proverbial summit of that next mountainous challenge.

"Look, every time you're not on snow, you're at zero risk of getting injured on snow. And anytime you are, you're at some sort of risk of getting injured on snow," the 23-year-old Johnson said in a phone interview from Park City, Utah, where she's rehabbing. "I know that as well as anybody. Those are things that haunt me in the middle of the night.

"I can either sit around and wait or I can just face my fears. I'd rather face my fears and do what I love than let those fears destroy my career."

The last time she stepped into a World Cup downhill starting gate was on March 14, 2018. She finished eighth that day in Sweden. It was a month after taking seventh in the downhill at the Pyeongchang Olympics.

Johnson's part of the next generation of American racers ready to follow in the footsteps of Lindsey Vonn and Julia Mancuso, who are both now retired after decorated careers.

Her crash put that on hold.

Johnson was practicing her super-G turns on Sept. 3, 2018, in Chile when she hooked an edge on the side of a hill and fell. Torn ACL. There went her season.

She chronicled the steps of her rehab journey in a series she called "Patient Notes." It revealed her thoughts and the physical toll.

Like this one when she realized she couldn't get back last season: "I lied. I lied to the people around me; I lied to the public; but most of all I lied to myself. I told the world that I wasn't going to race. But I wanted to. I planned to. ... I also think, while I am trying to be truly honest with myself, that it will be better for my skiing to wait."

Johnson took all the proper steps to get back. She made sure her knee was as strong as possible.

Then, another setback — to the other knee.

On June 13, she caught an edge in a training crash at Mammoth. Her social media post summed up her feelings: "Devastated, gutted, shattered."

She wasn't the only member of the U.S. speed team returning from injury. Alice McKennis and Jacqueline Wiles worked their back and are ready to race this season. It will be a little longer for Laurenne Ross , who's planning to miss this year as she recovers from a knee injury suffered last season.

But they're all eager to help carry the torch of American skiing alongside two-time Olympic gold medalist Mikaela Shiffrin , who's won three World Cup overall titles.

"We were really ready to pick up that mantle and carry U.S. women's speed forward," Johnson said. "Then, we all got injured. We were frustrated for that. But everybody is getting back and that's really amazing."

Johnson's target date for a World Cup training run is Jan. 23, 2020, in Bulgaria. If that goes well, maybe the downhill race a few days later. Or maybe a race the following week in Sochi.

That didn't seem possible after her recent injury. There was even some consideration she should sit out another season.

But that wasn't going to happen.

So, her medical team gave her a step-by-step outline:

Johnson said she's currently on "Step 6a" and moving toward returning to snow the week of Thanksgiving.

IT experts investigating a cyberat ...

Rivals don't believe they can beat Shiffrin to overall title