Bolivia faced its worst unrest in decades amid a political vacuum Tuesday, while Evo Morales, who transformed the Andean nation as its first indigenous president, fled the country following weeks of violent protests.

Morales flew out on a Mexican government plane late Monday hours after being granted asylum as his supporters and foes fought on the streets of the capital while an opposition leader tearfully laid out a possible path toward new elections in the wake of the president's resignation.

Morales stepped down Sunday following weeks of widespread protests fed by allegations of electoral fraud in the Oct. 20 presidential election that he claimed to have won. Resignations by every other constitutionally designated successor left unclear who would take his place and how. 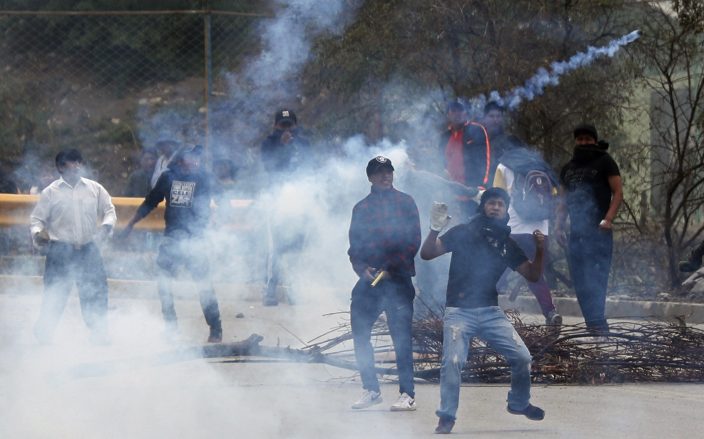 Supporters of former President Evo Morales protest amid tear gas fired by police in La Paz, Bolivia, Monday, Nov. 11, 2019. Morales' Nov. 10 resignation, under mounting pressure from the military and the public after his re-election victory triggered weeks of fraud allegations and deadly demonstrations, leaves a power vacuum and a country torn by protests against and for his government. (AP PhotoJuan Karita)

His flight from the country was a dramatic fall for the llama shepherd from the Bolivian highlands and former coca growers' union leader who as president helped lift millions out poverty, increased social rights and presided over nearly 14 years of stability and high economic growth in South America's poorest country. In the end, though, his downfall was marked by his insistence on holding onto power.

"It pains me to leave the country for political reasons, but I'll always be concerned," Morales said on Twitter. "l'll return soon, with more strength and energy."

Mexican Foreign Minister Marcelo Ebrard published a photo of Morales holding the flag of Mexico, saying that the plane had left Bolivia and that Morales was safe. 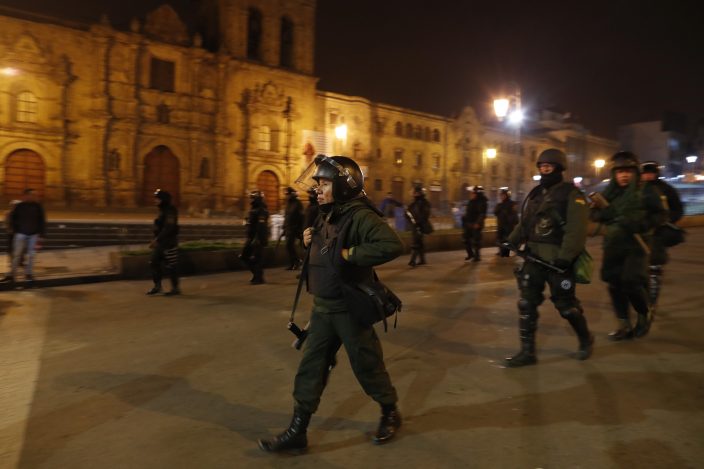 Police patrol in La Paz, Bolivia, Monday, Nov. 11, 2019. Bolivian President Evo Morales' Nov. 10 resignation, under mounting pressure from the military and the public after his re-election victory triggered weeks of fraud allegations and deadly demonstrations, leaves a power vacuum and a country torn by protests against and for his government. (AP PhotoNatacha Pisarenko)

In an earlier tweet, Morales posted a photo of his first night after he resigned showing him lying on a floor with an improvised blanket as a bed. He said had been forced into these conditions after what he has called a coup by the opposition.

Angry supporters of the socialist leader set barricades ablaze to close some roads leading to the country's main airport Monday, while his foes blocked most of the streets leading to the capital's main square in front of Congress and the presidential palace. Police urged residents of La Paz to stay in their homes and authorities said the army would join in policing efforts to avoid an escalation of violence.

The Senate's second vice president, opposition politician Jeanine Añez, said in an emotional address that she would take temporary control of the Senate, though it was unclear if she would be able to get approval from Congress, which is controlled by Morales supporters. She would become next in line for the presidency if chosen to head the Senate. 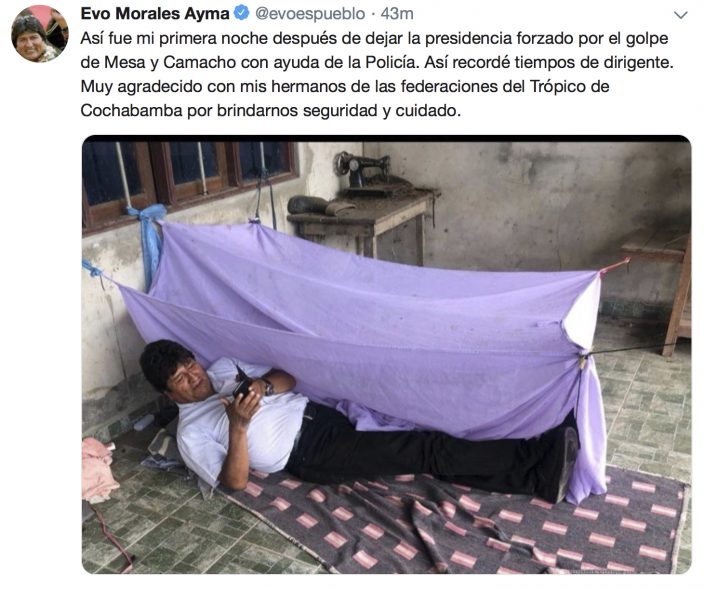 This screen grab of a tweet posted on the account of Bolivia's former President Evo Morales on Monday, Nov. 11, 2019, shows him lying on the floor at an undisclosed location and a text that reads in Spanish "This was my first night after leaving the presidency forced by a coup by Mesa and Camacho with the help of the police. I remembered my times as leader. I'm grateful to my brothers from the of Cochabamba tropic's federations for providing us with security and care." Morales resigned to the presidency on Nov 10, under mounting pressure from the military and the public after a disputed re-election victory that triggered weeks of fraud allegations and deadly protests. (AP Photo)

"Please excuse me if my voice breaks," Añez said between tears after arriving in Congress under heavy guard. "It's so hard to see Bolivians clashing, no matter which side they're on. They are being mistreated, and I'm asking you to cease the violence."

Añez said she would convene a legislative session Tuesday to consider accepting the formal resignation of Morales. It was unclear, however, if lawmakers could meet that soon because of insecurity in the capital.

As tensions grew, local media reported that Morales supporters were marching on La Paz from the nearby city of El Alto, a Morales stronghold, to try to break the street blockades thrown up by his opponents and reach the capital's main square. 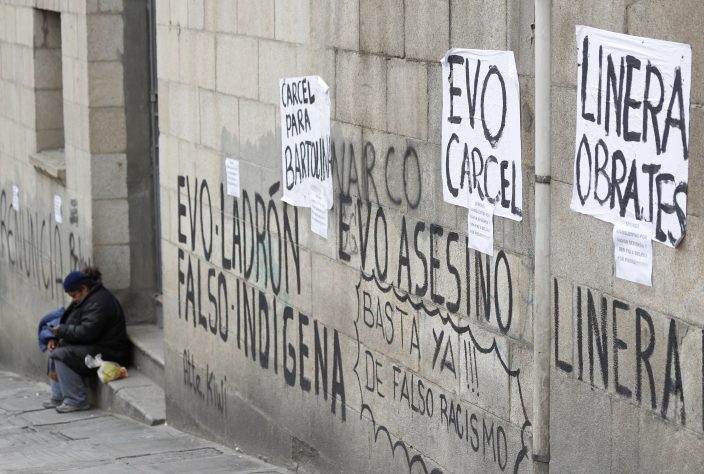 A woman rests at the entrance of a building whose walls are covered with graffiti agains Bolivia's former President Evo Morales, in La Paz, Bolivia, Monday, Nov. 11, 2019. Morales' Nov. 10 resignation, under mounting pressure from the military and the public after his disputed re-election victory triggered weeks of fraud allegations and deadly demonstrations, leaves a power vacuum and a country torn by protests against and for his government. (AP PhotoJuan Karita)

Gen. Williams Kaliman, the chief of the armed forces, announced the joint police-military operation in a television address. He said the hope was to "avoid bloodshed and mourning of the Bolivian family," and he urged Bolivians to help restore peace.

Anti-Morales demonstrators in downtown La Paz set tires and other barricades on fire as other people went onto their rooftops to yell, "Evo, murderer!" Rock-throwing demonstrators also clashed in Cochabamba and other cities.

His presidency, the longest among serving leaders in the region and the longest ever in Bolivia, ended abruptly Sunday, hours after Morales had accepted calls for a new election by an Organization of American States team. The team reported a "heap of observed irregularities" in the Oct. 20 election whose official results showed Morales getting just enough votes to avoid a runoff that analysts said he could lose against a united opposition. 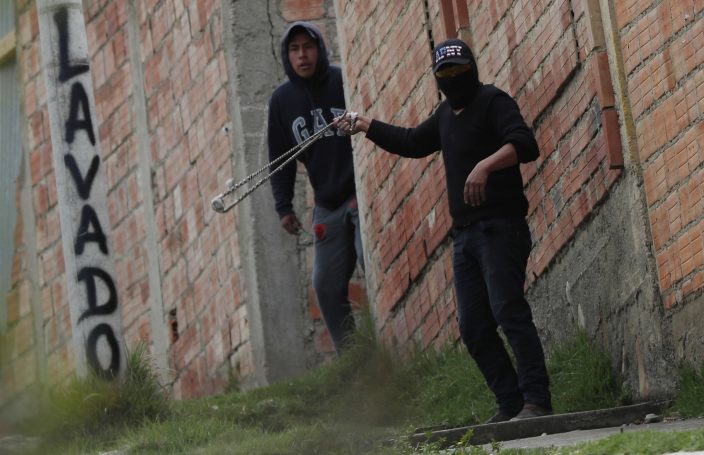 Supporters of former President Evo Morales clash with police, one using a slingshot, in La Paz, Bolivia, Monday, Nov. 11, 2019. Morales' Nov. 10 resignation, under mounting pressure from the military and the public after his re-election victory triggered weeks of fraud allegations and deadly demonstrations, leaves a power vacuum and a country torn by protests against and for his government. (AP PhotoJuan Karita)

Morales stepped aside only after the military chief called on him to quit, saying that was needed to restore peace and stability. His vice president also resigned as did the Senate president. The only other official listed by the constitution as a presidential successor, the head of the lower house, had resigned earlier.

Morales has lashed out at his political opponents, calling his removal a return to the bleak era of coups overseen by brutal Latin American militaries that ruled over the region.

Former President Carlos Mesa, who finished second in the election, said Morales was brought down by a popular uprising, not the military. He noted that troops did not take to the streets during the unrest.

"Academics and the press have been very critical of the Bolivian military. But this might be the only time in Bolivian military history that the military is on the right side for once," said Eduardo Gamarra, a Bolivian political scientist at Florida International University.

"There's nothing here that remotely mirrors a traditional military coup," Gamarra added. "Perhaps this is a time that the military is playing a role that it should play. It's not intervening in what are essentially civilian affairs."

"The temptation for any vengeance against Morales supporters needs to be resisted," Shifter said. "That would be a recipe for continued conflict and chaos that could well put at risk some of the country's undeniable socio-economic gains over the past decade."

People waiting for flights Monday morning at the airport in the eastern Bolivian city of Santa Cruz listened to the national anthem played on television and then watched replays of Morales resigning in his televised address and news of the street clashes.

"At first people believed in him as an Indian. He was much more humble and accessible, but during these 14 years, he changed," España Villegas, a linguist, said while she waited for a flight to La Paz.

Morales, who was from the poor Andean highlands, had promised to remain austere when he became president in 2006. But shortly after, he bought a new airplane and built a 26-story presidential palace with a heliport.

"He fought poverty, he lifted our economy, but perhaps he wasn't well advised," Villegas said.

Morales ran for a fourth term after refusing to accept the results of a referendum that upheld term limits for the president — restrictions thrown out by a top court that critics contend was stacked in his favor.

"The whole population was tired of him because it's been nearly 14 years of government," said a businessman from the city of Cochabamba, who asked to be identified only by the name Walter, fearing reprisals by Morales supporters.

"There was no respect anymore. We're hurt. He believed himself to be a god."