A tiny deer-like species not seen by scientists for nearly 30 years has been photographed in a forest in southern Vietnam, a conservation group said Tuesday.

Images of the silver-backed chevrotain, commonly called the Vietnamese mouse deer, were captured in the wild by trap cameras, Global Wildlife Conservation said.

It said the rabbit-sized animal is not a deer or a mouse, despite its nickname, but is the world's smallest hoofed mammal. 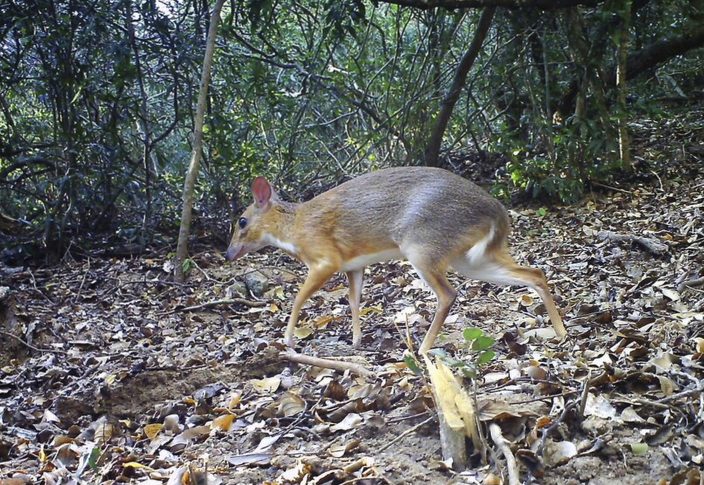 In this Apr. 22, 2018, photo, a silver-backed chevrotain is captured on a camera trap in an undisclosed forest in south central Vietnam. The species, commonly known as Vietnamese mouse deer, was rediscovered after 30 years. (Southern Institute of EcologyGlobal Wildlife ConservationLeibniz Institute for Zoo and Wildlife ResearchNCNP via AP)

They are shy and solitary, have two tiny fangs, appear to walk on the tips of their hooves, and have a silver sheen, the group said.

"For so long this species has seemingly only existed as part of our imagination. Discovering that it is, indeed, still out there, is the first step in ensuring we don't lose it again, and we're moving quickly now to figure out how best to protect it," said An Nguyen, a conservation scientist at the Leibniz Institute for Zoo and Wildlife Research, a partner of GWC in the project.

The chevrotain was first described in 1910 by four people. A fifth sighting was reported in 1990 in central Vietnam, making it one of the rarest animals in the world, GWC said in a statement. 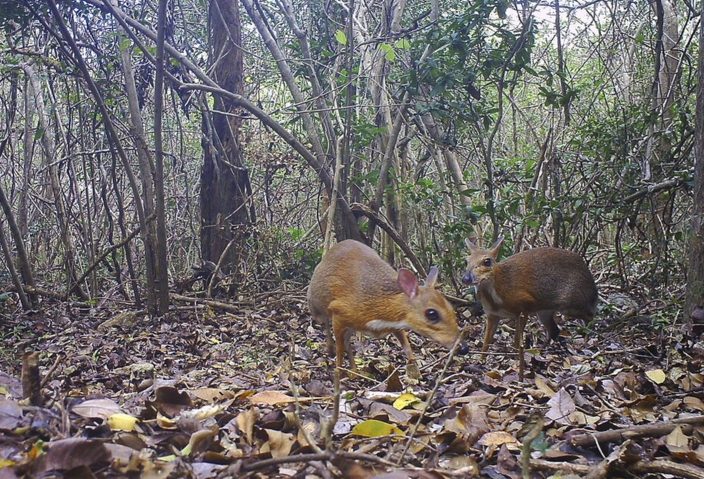 In this Jun. 6, 2018 photo, two silver-backed chevrotains were captured by a camera trap in an undisclosed forest in south central Vietnam. The species, commonly known as Vietnamese mouse deer, was rediscovered after 30 years. (Southern Institute of EcologyGlobal Wildlife ConservationLeibniz Institute for Zoo and Wildlife ResearchNCNP via AP)

An and his team set up camera traps after receiving reports from local villagers and forest rangers of the animals. The cameras took some 1,800 photos of the species over a period of 5 months.

"The rediscovery of the silver-backed chevrotain provides big hope for the conservation of biodiversity, especially threatened species, in Vietnam," Hoang Minh Duc, head of Vietnam's Southern Institute of Ecology's Department of Zoology, was quoted as saying by GWC.

"This also encourages us, together with relevant and international partners, to devote time and effort to further investigation and conservation of Vietnam's biodiversity heritage," Duc said.

Wildlife in Vietnam face many threats including poaching and habitat loss due to urbanization.