The foundation that awards the World Food Prize to individuals who work to improve food security in hopes of ending world hunger announced Tuesday that its new president will be a woman who has led nonprofit organizations focused on global food security, food safety and the impact of climate change on agricultural productivity.

Barbara Stinson will succeed Kenneth Quinn, the former U.S. ambassador to Cambodia whose 20-year presidency of the World Food Prize Foundation established an international presence for the organization.

The foundation attracts 1,200 world leaders from 65 countries to the annual award ceremony and symposium to address issues related to global food security and nutrition. 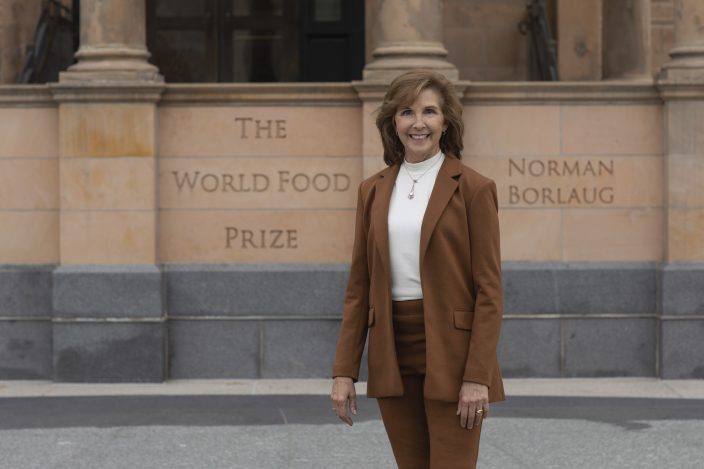 Stinson said her goal is to focus on the platform already established over the foundation's three-decade history and expand on its work with the goal of further alleviating hunger in the most vulnerable parts of the world.

"You can see in various parts of the world reductions in hunger by official measures and statistics and it's great to see but we still face over 800 million people hungry every day. So, the challenge is global and it's more pronounced on certain continents. In absolute numbers in Asia and in Africa by prevalence more people go to bed hungry per capita than on any continent in the world so there is still so much work to be done," she said.

Quinn, who became the organization's first president in 1999, announced his retirement in March.

Plant scientist Norman Borlaug, the 1970 recipient of the Nobel Peace Prize, created the World Food Prize in 1986 to recognize scientists and others who have improved the quality and availability of food.

The award carries a $250,000 prize. The recipient is announced in the spring, usually at the U.S. State Department, and the award is delivered at an annual ceremony in Des Moines, Iowa, where the foundation is based.

The organization was initially funded by John Ruan, an Iowa entrepreneur who founded a diverse business enterprise that included transportation, commercial banking, financial services, international trading and real estate development. His son, John Ruan III, continues to serve as chairman of the foundation, which currently is funded by about 80 corporate, private and government donors including agriculture chemical companies Corteva Agriscience and Bayer CropScience.

This corporate sponsorship has brought criticism from some including the Iowa-based Occupy World Food Prize organization, which has accused corporate sponsors of being biotech, seed-and-chemical monopolists that promote the opposite of sustainability.

The group protests at the ceremony held at the Iowa Capitol each year, events which have led to protester arrests.

Stinson, who now lives in Denver, will relocate to Des Moines as she assumes the leadership at the World Food Prize headquarters beginning Jan. 4.

A fourth person has died in an out ...

Johanna Konta wasn't sure even as ...