Lebanon's banking association says banks will stay closed due to a strike by employees as the country's financial crisis worsens.

Banks were supposed to open on Tuesday following a three-day closure, but employees have gone on strike, complaining of aggressive behavior by customers.

Depositors have rushed to withdraw their money in recent days amid a rapidly deteriorating economic and financial crisis.

University students chant slogans as they beat their hands against a graffiti-covered wall during ongoing protests against the Lebanese government, in Beirut, Tuesday, Nov. 12, 2019. Protesters resumed demonstrations on Tuesday blocking some roads and governmental institutions. (AP PhotoBilal Hussein)

The country's lenders have imposed varying capital controls that differ from bank to bank, triggering panic and anxiety among clients. Some have taken out their anger on employees.

The government has said it will continue to meet customer needs through ATM machines, but many Lebanese were unable to withdraw their money Tuesday. 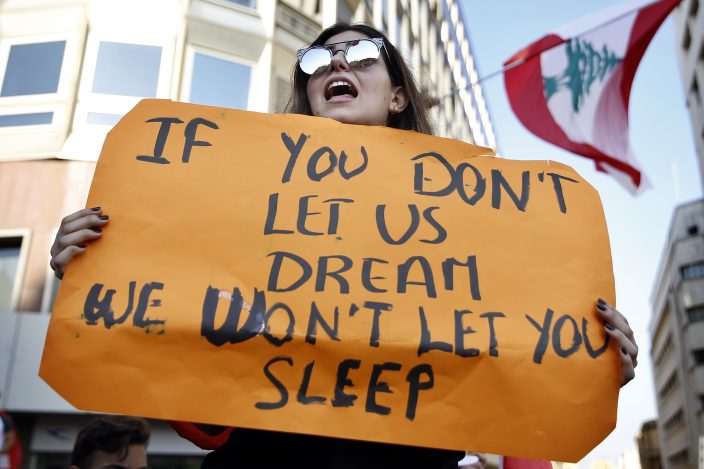 A student protester holds a placard as she chants slogans against the Lebanese government, in Beirut, Lebanon, Tuesday, Nov. 12, 2019. Protesters in Lebanon resumed demonstrations on Tuesday blocking some roads and governmental institutions. (AP PhotoBilal Hussein)

Lebanese take to the streets as currency hits a new low