The chief of Bosnia's border police warned Tuesday that his guards cannot contain the migratory pressure along the country's eastern border with Serbia and that the situation could easily escalate and put in danger the overall stability of the politically fragile nation.

Zoran Galic told The Associated Press in an interview that securing the nation's entire 1,600-kilometer (995-mile) border along a popular migration route into Europe was like the "work of Sisyphus." That was a reference to the Greek mythical hero who was condemned for eternity to push a rock up a mountain only to watch it roll all the way down every time he reaches the top.

"We are in a constant struggle to deter migrants, but they never quit," he said. 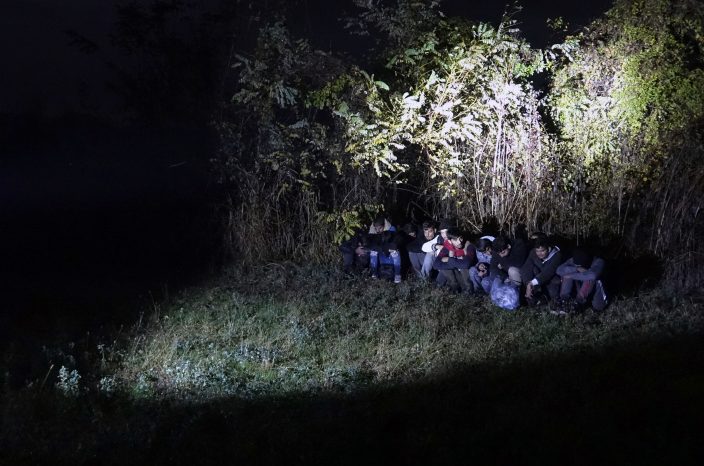 In this photo taken Saturday, Nov. 9, 2019, Bosnian border police officers guard migrants after making the illegal crossing from Serbia by the Drina river, the natural border between Bosnia and Serbia, near eastern Bosnian town of Zvornik, Bosnia. Bosnian border police are warning they cannot contain migratory pressures along the country's eastern border with Serbia, warning the situation could easily escalate and put in danger the overall stability of their politically fragile nation. (AP PhotoEldar Emric)

Describing the scale of the problem, he said: "We encounter women who are eight months pregnant, juvenile children, and we are doing our best to treat them morally, with respect for all international (human rights) conventions."

Since the start of the year, more than 13,000 migrants have arrived in Bosnia, according to Bosnian government statistics. The impoverished country is unable to provide them with appropriate accommodation and many are left without access to hot meals, showers or proper medical care, to the growing consternation of local communities.

Galic said his border police forces is short 1,000 officers and the modern technology required to secure the borders. He said the country only has one officer per every 30 kilometers (19 miles) of border.

Bosnia is located along the so-called Balkan route that migrants from the Middle East, Central Asia and North Africa take in hopes of reaching western Europe. The route became more popular nearly three years ago after other countries in the region sealed off their borders.

Most migrants arrive in Bosnia from Serbia after moving relatively unimpeded across the poorly guarded border between the two countries. From there they walk northwest to Bosnia's border with the European Union-member Croatia.

The Bosnian border with both Serbia and Croatia is mostly porous, with rivers, mountains and vast tracts of forest.

But Croatia has been taking increasingly efficient steps to prevent cross-border movement, so a growing number of desperate migrants remain stuck in Bosnia, one of the poorest and most volatile countries in Europe.

Migrants caught by Bosnian border police officers, after making the illegal crossing from Serbia, described to the AP being smuggled across the Drina River by human traffickers.

"I am paying crossing river 3,000 euro. Who take the money? It is smuggler, men smuggler," said a migrant who identified himself only as Waqar, and said he was a 17-year-old Pakistani.

Over the past few months, the high influx of migrants has unleashed acrimony among Bosnia's squabbling nationalist leaders who represent the often-competing interests of the country's Bosniak, Croat and Serb ethnic communities.

Most notably, Bosnian Serb hard-line leader Milorad Dodik, who is a member of Bosnia's multi-ethnic joint presidency, has blocked efforts to deploy the army to stem the influx of migrants from Serbia.

Dodik is also blocking the deployment of the EU's border protection agency teams along Bosnia's border with Croatia, using the crisis to promote his Serbian-first attitude, including by refusing to accommodate any migrants in the country's highly autonomous Serb-run half.

Many Bosnians have sympathy for the asylum seekers, with memories of when many of them sought refuge elsewhere.

During the war in Bosnia of 1992-95 — the deadliest of the ethnic wars sparked by the breakup of Yugoslavia — more than 100,000 people died, and more than half the population was forced to flee.