Lamar Jackson has been one of the most dynamic players in the league this season.

The Baltimore Ravens quarterback has 2,036 passing yards and 15 touchdowns, along with 702 rushing yards and six rushing TDs. Jackson went 15 for 17 for 223 yards and three touchdowns and added a dazzling 47-yard touchdown run in the Ravens' 49-13 rout of winless Cincinnati, Baltimore's fifth consecutive victory.

And Jackson and the surging Ravens have flown all the way to the top of the latest AP Pro32 poll . 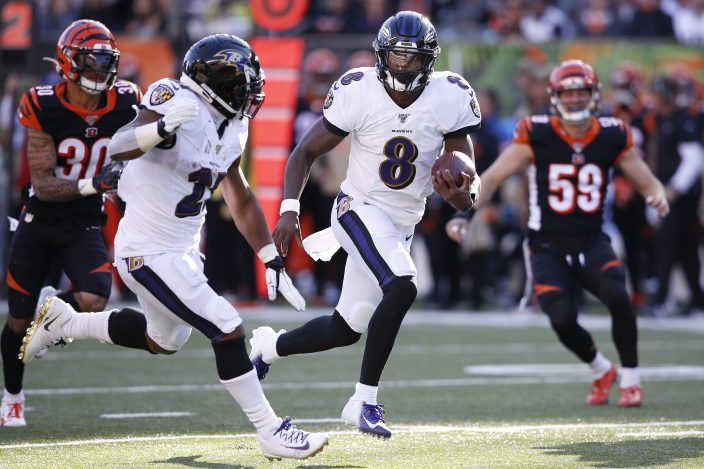 Baltimore Ravens quarterback Lamar Jackson (8) runs the ball for a touchdown during the second half of NFL football game against the Cincinnati Bengals, Sunday, Nov. 10, 2019, in Cincinnati. (AP PhotoGary Landers)

Baltimore received seven of the 12 first-place votes for 375 votes in balloting Tuesday by media members who regularly cover the NFL.

"Shakeup at the top. The Ravens earned the top spot with the victory over the Patriots," said Charean Williams of Pro Football Talk. "How many No. 1s are we going to have this year?"

There have been three so far. 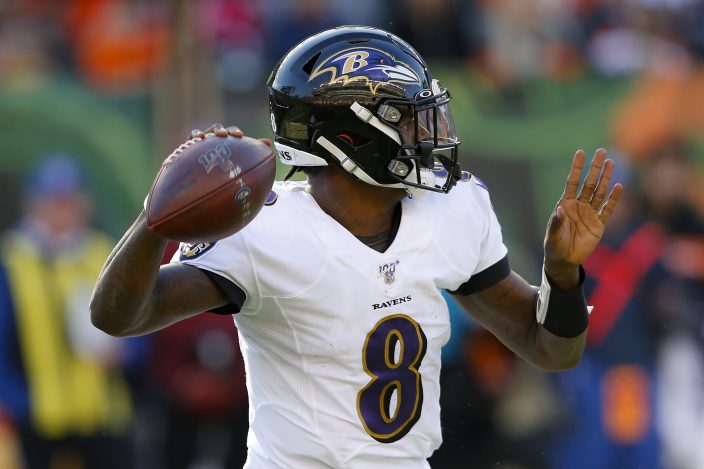 The New England Patriots, who were on their bye week, received the remaining five first-place votes for 372 points and moved up a spot to No. 2. The Patriots' only loss this season came in Week 9 at Baltimore.

The San Francisco 49ers, who were the league's last unbeaten team, dropped from the top spot to No. 3 after losing 27-24 in overtime Monday night to the Seattle Seahawks. Russell Wilson and the Seahawks moved up a spot to No. 4 and trail the 49ers by a half-game in the NFC West.

The NFC North-leading Green Bay Packers gained two spots to No. 5 after holding on to beat the Carolina Panthers 24-16.

And the New Orleans Saints fell four spots to No. 6 after losing 26-9 to the Atlanta Falcons, who entered the game with one win on the season.

"The Saints just received a rather loud wakeup call in the Big Easy, courtesy of the last-place Falcons," said Ira Kaufman of Fox 13 in Tampa, Florida.

The Minnesota Vikings, who trail the Packers by a game in the division, inched up a spot to No. 7.

And the AFC South-leading Houston Texans also moved up a spot to No. 8 despite being on a bye. The Texans head to Baltimore to take on the Ravens on Sunday.

The sputtering Kansas City Chiefs fell three spots to No. 9 after losing to the Tennessee Titans in Patrick Mahomes' return. The Chiefs have lost four of six after getting off to a 4-0 start. They will close out Week 11 when they face the Los Angeles Chargers in Mexico City on Monday night.

And despite losing at home to the Vikings on Sunday night, the Dallas Cowboys rounded out the top 10 for the second consecutive week.

"Cowboys could be wasting a lot of talent if not in (the) playoffs," Fox Sports' John Czarnecki said.

Pressure mounts on Biden to make diverse picks for top ...