A federal lawsuit filed Tuesday aims to keep one of the world's biggest methanol refineries from being built along the Columbia River in Washington state.

Plans for the $2 billion refinery, shipping terminal and pipeline project in the small city of Kalama are already stalled after a state board required further environmental review. 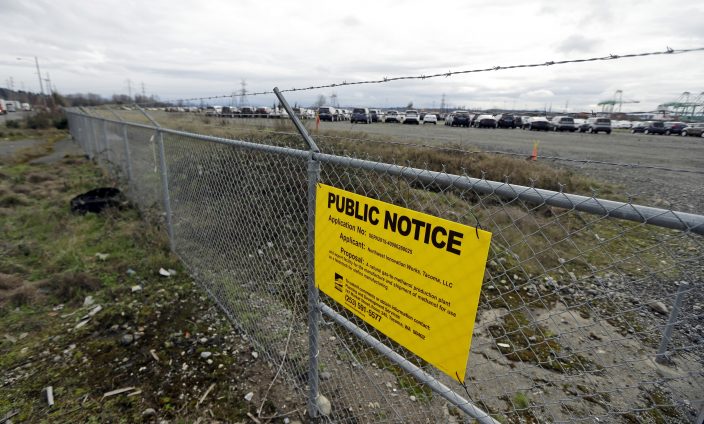 FILE - This Feb. 18, 2016, file photo shows a public notice sign marking the site of a proposed methanol plant at the Port of Tacoma in Tacoma, Wash. A new federal lawsuit filed Tuesday, Nov. 12, 2019, aims to kill plans to build one of the world's biggest methanol refineries along the Columbia River. (AP PhotoTed S. Warren, File)

The U.S. Army Corps of Engineers, which issued the permits, did not immediately respond to an email seeking comment.

"The urgency of our climate crisis demands the highest level of scrutiny, and we cannot allow massive new fracked gas projects to move forward based on outdated science and flawed evaluation," Joan Crooks, chief executive of Washington Environmental Council, said in a news release announcing the lawsuit.

The refinery is billed as a facility that would turn fracked natural gas from Canada into methanol for shipment to China to make plastics. But a report by Oregon Public Broadcasting earlier this year revealed that the company behind the project had suggested to investors the methanol could be burned as fuel. That would make for a worse impact on the planet, environmental groups say. 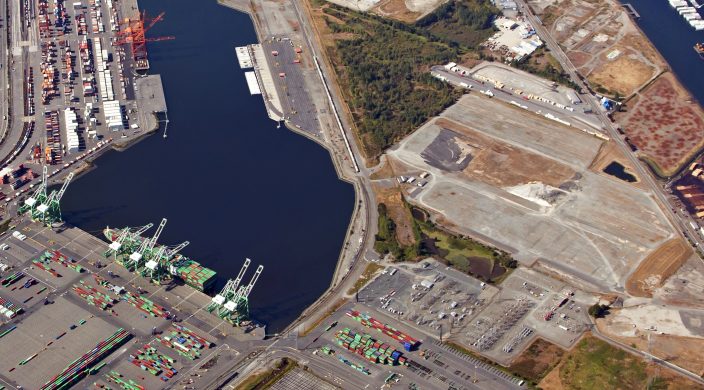 FILE - This Sept. 5, 2012, aerial photo provided by the Port of Tacoma shows the site of a proposed methanol plant at the Port of Tacoma, seen at right in Tacoma, Wash. A new federal lawsuit filed Tuesday, Nov. 12, 2019, aims to kill plans to build one of the world's biggest methanol refineries along the Columbia River. (Port of Tacoma via AP, File)

The project is backed by Northwest Innovation Works, a U.S. company owned by the Chinese government. The company did not immediately return an email seeking comment Tuesday, but it has argued that its facility would provide a cleaner source of methanol for plastics than coal.

A study conducted for the company suggested that if the plant is not built, methanol derived from coal would continue to supply the growing Chinese market, resulting in worse greenhouse gas emissions.

"If your goal is to dramatically reduce global greenhouse gas emissions, you want this facility to be built," Kent Caputo, general counsel for Northwest Innovation Works, said in a news release in August.

Kristen Boyles, an attorney for the plaintiffs with the environmental law firm Earthjustice, called that ludicrous.

"If there was evidence that building this project would cause other plants to shut down, then maybe that would be worth considering," she said Tuesday. "It's unsupported and entirely speculative."

The groups said the U.S. Army Corps of Engineers did not properly consider the huge amount of greenhouse gases the project would emit — more than 1 million tons per year, an amount that would increase Washington's greenhouse gas emissions by 1 percent.

Instead, they said, the agency conducted a more cursory review and issued a finding that issuing permits would have "no significant impact" on the environment.

They also said federal reviews had failed to properly consider the project's effects on threatened salmon runs and on endangered orcas.

Local officials have supported the project, noting it would bring about 1,000 construction jobs and 190 longer-term positions to the region.

Washington Gov. Jay Inslee used to support it, saying it would help clean up China's plastics industry. He changed his mind last May amid his short-lived presidential run, which centered on combatting climate change. He said that because of the urgency of the threat from global warming, he could no longer support launching massive new fossil-fuel infrastructure in the state.

Lightning's Stamkos out for Game 4, not ruled out ...