A sharp escalation of violence in Hong Kong is once again raising the question of how China's central government will respond: Will it deploy its armed forces, or allow the chaos and destruction to continue?

Protests persisted Tuesday at university campuses and the central business district following a day of violence that left two people in critical condition after a police officer shot a protester and a man was set on fire during an argument with demonstrators.

Rioters again disrupted traffic and vandalized shops in multiple neighborhoods. Subways were partially shut down, and passengers on one train were forced to get off and walk along the tracks.

In this Tuesday, Nov. 12, 2019, photo, student protesters walk by the vandalized Hong Kong University as protests continue in Hong Kong. A sharp escalation of violence in Hong Kong has once again raised the question of how China's central government will respond. Experts said national security measures and deployment of the armed forces remain possibilities, though Beijing may just as likely allow destruction to continue unfolding. (AP PhotoKin Cheung)

The unabating tumult, now in its sixth month, may give the ruling Communist Party the justification it needs to intervene, analysts said.

"Beijing is hoping that the Hong Kong community will start blaming the protesters and support the restoration of order," said Jean-Pierre Cabestan, a political science professor at Hong Kong Baptist University.

While the movement began peacefully in June to oppose a now-withdrawn extradition bill, it has been increasingly defined by smaller groups of hard-core demonstrators bent on sowing chaos. Their actions, which have included setting cars on fire and smashing storefronts, have alienated many residents. 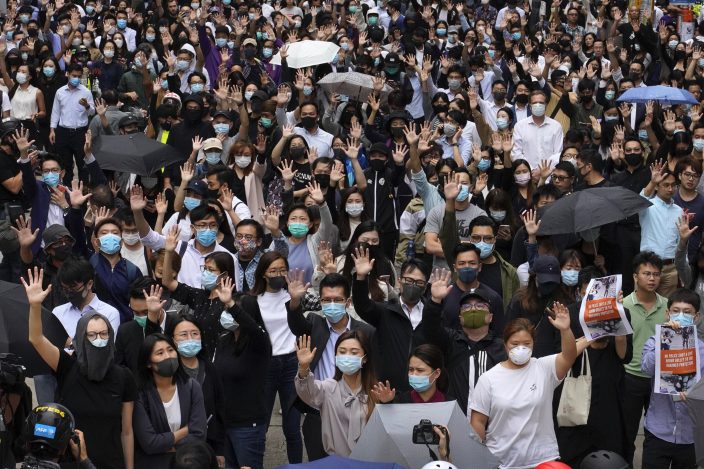 In this Tuesday, Nov. 12, 2019, photo, office workers and pro-democracy protesters hold up their hands to represent their five demands as protests continue in Central, Hong Kong. A sharp escalation of violence in Hong Kong has once again raised the question of how China's central government will respond. Experts said national security measures and deployment of the armed forces remain possibilities, though Beijing may just as likely allow destruction to continue unfolding. (AP PhotoVincent Yu)

The central government must wait for the right moment to step in, Cabestan said, adding that if China acts before public opinion is fully on its side, it could just add fuel to the fire.

A former British colony, Hong Kong was returned to China in 1997 under the framework of "one country, two systems," a policy which promises the semi-autonomous territory certain democratic rights not granted to the mainland. But the arrests of pro-democracy activists and booksellers in recent years have raised fears among Hong Kong residents that Beijing is encroaching on the city's freedoms.

During a key meeting of the party's Central Committee at the end of October, Chinese leaders proposed establishing and strengthening the "legal system and enforcement mechanism for safeguarding national security" in special administrative regions like Hong Kong and Macao.

A meeting summary from the Xinhua state news agency did not elaborate on what this would entail, but Chinese officials have variously pointed to Article 14, Article 18 and Article 23 of the Basic Law, Hong Kong's de facto constitution.

Article 14 allows the Hong Kong-based garrison of the Chinese military to help with public order maintenance at the request of the local government. Article 18 states that national laws may be applied in Hong Kong if China's ceremonial parliament decides that the region is in a "state of emergency" that endangers national unity or security.

"When necessary, the People's Armed Police Force and the People's Liberation Army Hong Kong Garrison will back you up," the nationalistic Global Times said in an editorial Monday, addressing the Hong Kong police.

Zhang Xiaoming, head of the Cabinet's Hong Kong and Macao Affairs Office, said over the weekend that Hong Kong has yet to fulfill Article 23, which stipulates that the city will "enact laws on its own to prohibit any act of treason, secession, sedition, subversion" against the central government. These laws should also ban the theft of state secrets and prevent foreign political organizations from conducting political activities in Hong Kong. Beijing has repeatedly accused foreign forces of fomenting the unrest.

Proposing new national security legislation is likely to further inflame the protests, though China may not be opposed to that, said Joseph Cheng, a pro-democracy advocate and retired City University of Hong Kong political scientist.

China has made it clear that it intends to maintain a hard line politically, refusing to make any concessions to protesters while pushing ahead with unpopular security legislation, Cheng said.

A further concern is that Beijing might order the postponement of Hong Kong's local assembly elections scheduled for Nov. 24, freezing in place the current pro-China makeup of the body and avoiding possible embarrassment for the administration of Hong Kong Chief Executive Carrie Lam.

Although Lam has been criticized for a lack of leadership and her inflexibility, she has faithfully carried out Beijing's will. During meetings last week in Shanghai and Beijing, Chinese President Xi Jinping expressed support for her work.

As protesters' tactics have become increasingly extreme, crippling regular operations in the city and plunging various districts into mayhem, the government has shifted its focus toward the violence and away from the democratic reforms the movement intended to advocate.

"We all feel very depressed because we don't see the light at the end of the tunnel," Cheng said.